From the Smut Vault Dept.: One of my worst-kept secrets is the time I spent as computer correspondent Dr. Barry Tetons, advising the readers of D-Cup Magazine how to use their computers for maximum personal satisfaction. I’m offering this 1995 piece in anticipation of Valentine’s Day, and as a wistful reminder of how much cruder the crude used to be. 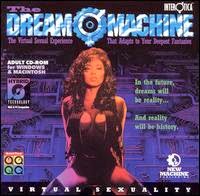 It never happens in movies or magazines, but your computer offers about the closest you’ll come to this experience, short of having Lisa Lipps knock on your door. Interactive CD-ROMs play full-motion, all-talking videos, miniaturized versions of what you enjoy on your VCR, but add an extra dimension: you’re in command. The best of these discs let you manipulate the characters and their actions in a far more satisfying way than most real-life encounters provide.

Smut has always been a driving force in technology, and computers have been especially susceptible to the lure of the lurid. As displays got sharper and sound got cleaner, processors and hard disks got faster – and things really started to move. High-resolution photos of your favorite models evolved into digital animation, allowing them to really take it off as the technology took off, too.

Let’s look at what’s out there – or you can peek over my shoulder as I browse – and then see if your equipment is up to the task at hand.

If you’ve attended any computer shows in the past couple of years, where a local hall is taken over for an afternoon by tables of aggressive vendors, you’ve seen the many displays of dirty CD-ROMs. Unless you’re in one of the more repressive areas that frightens dealers into hiding such things. For the most part, those discs contain pictures. Lots and lots of stills, usually gathered by specialty topic. Breasts, needless to say, are always popular. You can even find some 3D discs complete with those funny glasses for a lame attempt at virtual reality.

Pictures aren’t bad, of course, but you don’t need thousands of dollars’ worth of computer equipment to look at pictures (not that that stops me). Another group of those CD-ROMs contains movies – scaled-down versions of porno films. Scaled down in the sense that there’s so much overhead required to run a movie on a computer that certain compromises must be made. The display is small – typically a fourth of the size of your screen. The images change more slowly than the 24 frames per second of motion pictures or the 30 frames per second of television, and therefore seem a little hesitant.

What’s impressive, then, is when that technology gets the added boost of a computer’s random access ability. In other words, instead of watching something from beginning to end, make it interactive. Put the viewer in charge. New Machine Publishing’s “Interactive Adventures of Seymore Butts” does just that, with a scenario bound to make any video addict spill some seeds.

Seymore is a tongue-tied nitwit with a magic video camera, and we see whatever he’s filming. An early encounter with the elusive Brianna gives us a chance to help him make small-talk, but it’s a failure. Still, Seymore fares surprisingly well when he visits any of his libidinous friends, who always manage to engage in some manner of explicit sexual encounter. The happy-go-lucky “girls’ll fuck me if only I ask them the right way” premise transplants nicely to the nerdy world of computers.

The ultimate fantasy of any reader of this magazine is to be in on a photo session. With good reason, too: as you’ve surely guessed, all that sweat and excitement come from some pretty active sex play. You can get a taste of it from Penthouse Magazine’s Interactive Photo Shoot, a series of CD-ROMs featuring three Penthouse Pets apiece.

They’re there to pose for you, and the computer screen becomes your camera’s viewfinder. Each model begins with a short introduction, danced for you fully clothed, before letting you choose what she should take off and how she should handle whatever’s exposed. You’re expected to click the shutter periodically, and each “photo” is set aside as an image that you can save as a graphic file. Be choosy in your lensmanship, though: a surprise awaits you at the end of the session.

Striptease and photo-voyeurism – two of my favorite subjects – combine well to make this series of CD-ROMs very effective. Slightly tamer is the recently-released Penthouse CD-ROM collection of still images.

Do you have what it takes? A double-speed or faster CD-ROM drive is essential, and the processing horsepower of at least a 486-33 will also help. At the very least, get a fast video card with its own processing chip.

Interactive naughtiness still has some technological distance to travel, but don’t be surprised when you’re finally able to combine videoconferencing with online erotica for more immediate encounters. All the online sex talk in the world can’t compete with a juicy movie, especially one that does exactly what you tell it to do.

Hi my family member! I want to say that this article is awesome, nice written and include approximately
all vital infos. I would like to see extra posts like this .