From the Opera House Dept.: My review of the Glimmerglass Fesitval’s current production of Tobias Picker’s “An American Tragedy.”

POOR GRACE BROWN! She was a small-town factory worker who would have lived an anonymous life had she not drowned in Big Moose Lake in 1906. Instead, she achieved a posthumous fame that lives on through song and story. 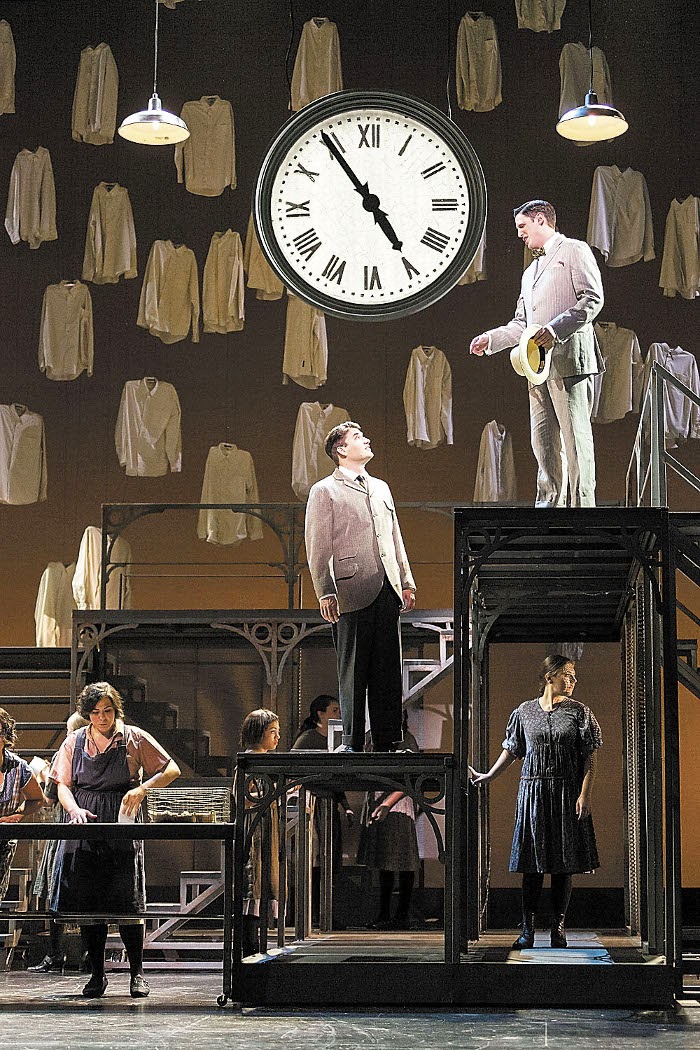 It was her love letters to two-timing boyfriend Chester Gillette, read aloud during his murder trial that, combined with his own ineptness at covering his tracks, packed the Herkimer courtroom, and then grabbed the imagination of Theodore Dreiser, who turned the story into a massive and very popular novel, informing the characters and events with compelling texture.

The challenge for librettist Gene Scheer was to find a core to this narrative that would work as the text of an opera, which he wrote with composer Tobias Picker. The version that premiered at the Met Opera (which commissioned it) in 2005 was more discursive. What debuted at the Glimmerglass Festival is shorn of its first 20 minutes, among other changes, and opens with a starkly-lit tableau of Clyde Griffiths (based on Chester) flanked by the women in his life: Roberta Alden (based on Grace) and Sondra Finchley (a never fully identified girlfriend).

And the lighting, by Robert Wierzel, is as much of a character in this piece as any of the singers. It’s oppressive at the opening, and, as it lightens into the shirt factory where Clyde supervises Roberta, it remains oppressive, hanging over the characters like storm clouds.

A backdrop of many hanging shirts is part of Alexander Dodge’s abstract set, which features stairways to different levels, all of them used effectively by director Peter Kazaras to emphasize shifting relationships among the characters.

Most of the cast is drawn from the Glimmerglass Young Artists program, and they are an exceptional array. Christian Bowers is all charm as Clyde, with a voice that’s slightly reedy but nevertheless effective.

Throbbing ostinatos underscored the meeting and romance of Clyde and Roberta, and Vanessa Isiguen sang the role of the doomed factory worker with compelling ardency, her voice a good match for Picker’s intricately layered music.

The score gives us a foxtrot when needed; it sounds a convincing hymn. Cynthia Cook, as society girl Sondra, could have stepped out of Vogue and her music also suggested something high-class, refined.

Only after Roberta’s effectively stylized death does the opera flag. Scenes between Clyde and his evangelical mother, Elvira (Patricia Schuman), had little of the momentum that came before, and it took a bit of trial and those heartrending letters to get the energy back on track for the sad, inevitable ending. Otherwise, it’s a gorgeous piece that deserves all the attention it can get.