From the CD Shelf Dept.: One of the ways the late, lamented Dorian Recordings label tried to monetize its inventory was through “Best Of” collections with a value-added extra or two. Here are the notes I wrote for one such release, celebrating the marvelous singer Custer LaRue.

IF THE SUM OF A SINGER can be found in her songs, Custer LaRue is an intelligent, introspective person who’s no stranger to the gamut of human emotion. The songs she chose for this collection don’t let you pigeonhole her much more than that – they’re songs of love and loss, of fun and deception and heroic triumph. And they all sound as if LaRue were born singing them. 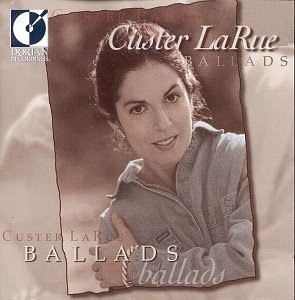 Effortlessness isn’t an obvious characteristic, but it’s one of the compelling components of her vocal technique. You don’t develop this through training: you do as LaRue did, and sing since earliest childhood.

“When I was a kid, I always said I was going to be a singer,” she said. “It’s kind of crazy, but it meant I was crazy enough not to give up on the idea. I grew up listening to my mother sing, with an incredible voice, and my grandmother and great-grandmother were very well known as local singers.”

She was raised in Virginia’s Allegheny Highlands, where LaRue also found in singing a valuable retreat from childhood’s craziness. “It was one of the few things that made me feel happy and complete, energized and consoled.”

Hers was a very rural high school, “and people I knew and grew up with were going off to fight in Viet Nam. I had a terrible time dealing with that . . . it was as if these people I knew had been sent to Mars to fight Martians. Singing became very therapeutic. My school was too small to have a choral music program, but I was able to perform in a few little competitions like the 4H Club’s talent show.”

This was when she got her first tastes of the songs that would become an important part of her repertory – the ballads of the rural South, most of which journeyed from Europe, took root, and evolved, like the immigrants who brought them.

“When I started singing those songs, my mother recognized some that my grandmother and great-grandmother used to sing. It was like meeting them at last, something I was never able to do in life.”

LaRue trained at the Peabody Conservatory in Baltimore, were she often felt out of place. “I’d go home after my classes in the Italian or French literature and listen to scratchy old records of real old-timey singers. And I thought they were beautiful.”

Among those singers were traditional balladeers like Richard Dyer-Bennett and Jean Ritchie, who specialized in bringing out the essence of a song without artifice, yet made each song unique to the performer.

“And the training I got at the conservatory turned out to be very useful. I couldn’t stand to be around opera singers. My teacher at Peabody, Flore Wend, was wonderful. She said to me, ‘You just can’t sing loud enough for oratorio, but you have a nice sound.’

“In 1978 I sang my graduate recital and Mlle. Wend encouraged me to perform some Machaut virelais on the program. It was kind of nuts, but I got bitten by the idea, and they turned out to be very attractive pieces that made good recital fodder. From Machaut, I delved into the huge collection of ballads put together by Francis James Child.” Which is where much of her Consort repertory can be found.

Her voice teacher introduced her to lutenist Roger Harmon and suggested they work together. Harmon founded the Baltimore Consort in 1980 to explore the literature for the Elizabethan consort, which calls for a specific half-dozen instruments. LaRue didn’t really function as a soloist with them until Harmon put together a program of Scottish music in 1983. “He stuck me into the constellation and it really started to click. And it was very satisfying to do this – very satisfying to find a basis for something I feel strongly about.”

Although Harmon now lives in Scotland, the ensemble otherwise has kept its personnel intact and the Consort has become LaRue’s main activity. “There’s a lot of preparation involved, so I’m always having to keep my nose to the grindstone to get ready for the next tour.”

She studies a lot of music but listens to few recordings. “That’s because I’m so suggestible. Most of my work consists of going to libraries, ferreting out old books, and spending time at the piano wading through page after page of manuscripts, looking for something I can really sink my teeth into.

“It’s special when it’s on the page. Usually I get a terrible copy, or something very dry and scholarly. I’ll read through it before I go to bed, put it on the piano, let it live there for a while. I’m careful not to share it with anyone else until I’ve internalized it. It gets to be part of your makeup. And then I’m ready to perform it. Performing these pieces gives me a tremendously rich spiritual bank account. Keeps me healthy.”

Mary Anne Ballard, who plays various viols in the Consort, is LaRue’s partner-in-delving. “She’s brilliant and ruthless in a library,” said LaRue. “There’s no library on earth she can’t get to the bottom of in a very short time.”

She also has an ally close to home, which, once again, is Virginia. “One of my mentors here at home is Dr. Fletcher Collins, who collected folksongs for the Library of Congress in the late ‘30s. He supplied me with lots of material.” Collins recorded “Charlie’s Sweet” in 1939, from the singing of Mrs. J.U. Newman in North Carolina; LaRue wrote of the song that it’s “a frisky play-party song and dance, a substitute for square dancing in the bad old days when dancing was banned but games were allowed. My great-grandmother, who disapproved of too much frivolity, would have chased Charlie and the other playboys out of her house.”

“People respond most warmly when I sing ballads,” LaRue writes in the notes to The Daemon Lover. “Maybe this is because we all love to hear the old stories told and retold, and this song process somehow brings us closer to the shared truths and universal feelings underlying our common human experience.” She chose ‘The Fox Went Out on a Chilly Night’ both for the magical image of the elusive beast and for the sense of triumph in the songs. “Geordie” and “Edward” both come from the Child collection; the former tells of the rescue of George Gordon by his wife, while the latter is a tragedy slowly, artfully revealed in dialogue.

“In a Garden So Green” and “My Heartly Service” are drawn from the encyclopedic Music of Scotland 1500-1700, both very old songs whose original credits have been lost to the centuries. “My Heartly Service” is a ceremonial number performed to mark the beginning of the plowing year, and includes the names of oxen, of herdsmen, and of parts of a plow.

“I like ‘Soldier Boy for Me’ a lot because in it the girl rejects as suitors all the professional men with community respect and money, and declares that only a soldier boy will fit her description of marriage-fodder. If you only substitute ‘poor musician’ for ‘soldier boy’ in this song, you’d have a piece that many females of my generation at the Peabody Conservatory could have sung.”

In 1932, Cecil J. Sharp’s collection of English Folk Songs from the Southern Appalachians was published. The music for both “The Rebel Soldier” and “The True Lover’s Farewell,” drawn from that book, were recorded by Sharp in Virginia in 1918.

During her first performances with the Baltimore Consort, LaRue recalls that she sang songs by Thomas Ravenscroft, and chose “Yonder Comes a Courteous Knight” for this collection. It was set by Ravenscroft and published in 1609, but it’s a still older tale, appearing in several versions in the Child collection, where it’s known as “The Baffled Knight.”

“The Broom of Cowdenknows” is from a late 18th-century collection of Scottish songs, but it’s set to a dance tune–“The Bonny Bonny Broom”–that was published more than a century earlier. It’s the lament of a lady for her shepherd love, wonderfully bittersweet.

“Jenny, My Blithest Maid” is a love-cum-seduction song from early 18th-century England, drawn from the multi-volume Wit and Mirth; Or, Pills to Purge Melancholy.

In the album La Rocque ’n’ Roll, LaRue and the Consort collected songs from Renaissance France, with a nod to the similarities between pop groups of today and the Consort, both in terms of instrumentation and repertory. “J’ai vû le loup” (“I saw the wolf”) is a gorgeous old lyric set to an unharmonized melody–a version of the Dies Irae--that the Consort fleshed out. “Has tu point veu” is a bawdy old look at the cuckold–and the woman who encourages such behavior. “Mignonne, allons voir si la rose” was penned by Pierre Ronsard, but borrows its melody from Renaissance tradition.

“Gloomy Winter’s Now Awa’” is a picturesque love song with the gentle lilt of a lullaby, which won it a place on Lullaby Journey, which LaRue recorded with Baltimore Consort flutist Chris Norman and harpist Kim Robertson. Robert Tannahill’s verse is set to an 18th-century tune by Alexander Campbell.

For the present recording, LaRue went back to the first ballad she ever learned. “I tried a few times to record ‘Barbara Allen’ before this, but somehow it always seemed jinxed. This time it worked. I think there are about 70 different versions of the song that have been collected, with variations on both the words and the melody. I use the tune my great-grandmother sang, but to get the definitive text, I drew from several sources to put together one that’s a little literary but countrified enough to sound authentic.”

She also selected (two? four?) songs she recalled from girlhood. “Everyone sings snippets of these French songs, but I couldn’t remember them in their entirety. Then I found a little volume of the pieces that were collected in Louisiana. They’re settings of nursery rhymes, very rhythmic, lovely little songs.”

Finding such songs and giving life to them is a pursuit LaRue never plans to abandon. “I know less than one-hundredth of one percent of the magic of what it’s all about, but whenever I do my work in this, I get wonderful benefits. That’s one of the benefits from having my curiosity.”