The Rain Before It Falls

From the Bookshelf Dept.: British writer Jonathan Coe attracted attention in the U.S. with the publication of The Winshaw Legacy (known in the U.K. as What a Carve-Up!), and continues to turn out excellent literary fiction that can be both hilarious and touching. His most recent novel is The Terrible Privacy of Maxwell Sim. Here’s my review of the one before that. 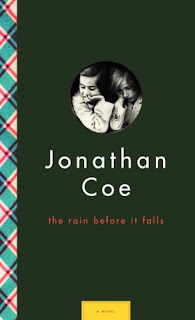 “YOU CAN’T TALK about the serious and the comic separately and still be talking about life,” observed Peter DeVries, “any more than you can independently discuss hydrogen and oxygen and still be talking about water.” Yet when a writer writes more than a passage or two of funny stuff, we rush to affix a label. Although considered a comic novelist, most of DeVries’s books have a darkness at the center; to similarly label the likes of Thomas Berger and Joseph Heller is also to miss the point.

Being British, Jonathan Coe comes from a tradition in which many comic writers (P.G. Wodehouse, Tom Sharpe) rarely get serious, but Coe takes his place alongside Evelyn Waugh and Kingsley Amis in his ability to uphold the DeVriesian dictate of chemically integrating your water.

The Rain Before it Falls is Coe’s fifth novel to be published in the U.S.; his debut here, The Winshaw Legacy, is a hilarious portrait of the Thatcher era as seen through the misadventures of a novelist-cum-biographer whose involvement with his subject proves more intricate than expected. It was funny and biting enough to forgive the plat contrivances that fueled its finish, but such contrivances grew even thicker in his next novel, The House of Sleep. Emerging alongside the mordant humor, however, was a crisp, elegant style, a narrative ease that blossomed in The Rotters’ Club and The Closed Circle, the two interconnected books that followed.

Meditations on memory and perception inform all of the aforementioned, but Coe’s latest dedicates itself entirely to such themes. Dickensian coincidence gives way to careful patterning, so that even the seemingly random act of a dog in flight proves portentous. “Nothing was random, after all,” concludes Gill, a woman whose actions kick the plot into motion. “There was a pattern: a pattern to be found somewhere ... ”

Gill’s aunt, Rosamond, has died and left behind a packet of photographs and cassette tapes intended for a long-vanished friend named Imogen – someone Gill met but once, and then over twenty years earlier.

And who is not to be found, so that Gill is left to listen the tapes in the hope of finding Imogen’s whereabouts. Those cassettes, dictated during Rosamond’s final hours, form the bulk of the novel as the story switches to Rosamond’s voice. Her narrative hangs on twenty photographs, each static image opening into a description of time and place – and then emotion, circumstance and, above all, perception. Each photo is an exercise in memory, and Rosamond’s memory is driven by detail and pattern and pain.

This character easily could have fallen into the hoary category of unreliable narrator, but Coe infuses her with a voice that reveals impressively wrought layers of complexity. And, in this story, reliability too twined with perception to be judged alone. Rosamond is too exacting, too fussy to be anything less than trustworthy. But she develops high expectations for herself and others and is often disappointed. In attempting to shoehorn her life into a moral framework that doesn’t work, and we see, sooner than she, that there’s no such fit.

Much of the story takes place in the aftermath of World War Two, a period skillfully captured through dialogue and description. Coe brings in such detail as Michael Powell’s 1950 movie “Gone to Earth,” filmed in the Shropshire village where much of the novel takes place, putting Rosamond and her cousin, Beatrix, on the set as background actors.

A complicated relationship between the two grows throughout the story, presented with enough emotional range to give it credibility. Beatrix is unpredictable and inconsistent, and a sense of unfulfillment torments Rosamond, even as her own life grows controversial.

In Rosamond’s voice, her pursuit of Lesbian relationships is almost unremarkable, although there will be unexpected consequences. Meanwhile, Beatrix marries and has a daughter, Thea, whom circumstance throws into Rosamond’s care.

This is the deftly-woven heart of the story, as Rosamond and her lover, Rebecca, find room in their lives for this unexpected child, who has become part of the family by photograph twelve. Not surprisingly for a writer with so much music in his prose, Coe also draws on images from music. In this novel, Cantaloube’s Songs of the Auvergne are a catalyst – in particular, the song titled “Bailero,” which sparks the couple’s interest in the area, and sets a key scene there.

The mystery of Imogen threads throughout the novel – a succession of mysteries, actually, most of which are resolved at the expense of Rosamond’s bright expectations. Don’t let the present wipe out the past, Gill tells herself as the book eases into its melancholy but hopeful conclusion – a beautifully rendered succession of scenes that shores up one of Rosamond’s earlier reflections: “There is nothing one can say, I suppose, about happiness that has no flaws, no blemishes, no fault lines; none, that is, except the certain knowledge that it will have to come to an end.”

The Rain Before it Falls
By Jonathan Coe
Knopf, $23.95