Across the USA Dept.: Time to park this bus, don’t you think? Here’s the wrap-up to the series of pieces – now strewn across this blog – that I wrote for the Schenectady Gazette in 1989. This one was written on Oct. 1, between Binghamton and Schenectady.

ITINERARIES ARE FOR THE BIRDS. (I write this while watching flocks of them in sculpted motion, an arrowhead pointing south.) We traveled ten thousand miles over the course of 30 days without making a single hotel reservation. The camper – a small, sturdy  Volkswagen – offered a lot of freedom, but even with a plain old car I’m not sure I’d do it any other way. Isn’t “tell ‘em where to go” something of an insult? 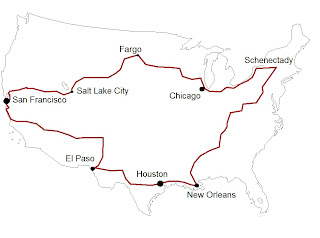 We left Sept. 1 and are returning on the first of October, a nice time of year to see just about any place in the country. And we still managed to drive through all kinds of weather, from a snowstorm in Yellowstone National Park to hot, dry sunshine in the Napa Valley.

Home is just up the highway. We’re gathering the little scraps of recollection that didn’t fit anywhere else. Like the night my wife saw a flying saucer hovering over Kentucky.

You have to understand how spooky a rural road can be at night to appreciate the picture. She was at the wheel, taking us around the hairpin turns on the side of a mountain in Pike County. Low clouds scuttled across the highway, misting the windshield. And then it came into view. Perfectly saucer-shaped, hovering over a ledge, a long lighted ladder descending from its belly to the ground below.

Susan didn’t gasp or start. She just emitted a low moan and left her mouth hanging open ... and saw that it was a coal-mining operation, a ring of streetlights giving the illusion of that saucer.

We both got spooked in Fargo, North Dakota, when we decided to hoof it from the small downtown area to our campsite, a couple of miles away at Roger Maris Park on the bank of the Red River. It was as pleasant an evening as you could imagine for such a walk, which took us from the narrow sidewalks of the not-overly-urban streets to a pathway along the river itself, where it was quiet and tree-lined. And dark.

Suddenly we were doing the “lions and tigers and bears, oh my!” dance, except that we were watching out for, you know, muggers and rapists and bums, oh my.

The path gave no indication of trouble. It was neat and unscarred. It was also unlighted. We realized, to our troubled amusement, that we had brought our own fears and imposed them on this seemingly peaceful place. Were we being overcautious? Were we spoiling the walk for ourselves?

It was a relief, finally, to confront someone. Two men, skulking in the bushes ahead. We braced ourselves to meet trouble, and instead met two kids with a bicycle who were themselves a little concerned about us. The following morning some locals told us there never was any trouble along that stretch, so nobody had ever seen the need to put any lights up there.

Fargo, by the way, is where I had the best steak of the whole trip. A small piece of sirloin served with a steak ‘n eggs breakfast at a Best Western.

As you can imagine, food figured heavily into a month on the road. The best all-around meal was served in a fancy Italian restaurant called Tra Vigne, in the Napa Valley. It makes sense: with so much good wine available, might as well have food to match. I had lamb osso bucco, which was melt-in-your-mouth scrumptious, and Susan had a freshly-made ravioli entrée stuffed with homemade sausage. This is a place that delivers a loaf of crusty bread to your table on a napkin with a dish of olive oil beside it.

I have to confess that I didn’t have an alligator hoagie in New Orleans. I wanted to – I really did – but what was supposed to have been a light lunch of Paul Prudhomme’s jambalaya kept me full the entire day. But you never saw so many signs for various preparations of alligator meat! All throughout the French Quarter there were little hole-in-the-wall joints that would roast or grill or sear or char the stuff for you. Hoagies seemed to be the most popular vehicle.

To appreciate the amazing contrasts this country offers, try what we did: we stopped in San Antonio at 3 a.m. to eat at a 24-hour Mexican restaurant called Mi Tiera, where strolling mariachi players serenade your table. Eighteen hours later we’re at Mulate’s in Breaux Bridge, Louisiana, eating spicy Cajun food while listening to spicy cajun music.

It doesn’t necessarily matter when you arrive to appreciate what a place has to offer. We saw the Alamo in the wee hours – when San Antonio is still pretty much a-bustle. And we stopped in Langtry, Texas, to see where Judge Roy Bean dispensed his style of justice, only it’s now a museum surrounded by high walls and we were there in the evening, past closing time.

We walked down to the Rio Grande and gazed across at an unpopulated Mexican flatland, then back to the car, where we met a custodian who generously opened the museum gate and gave us a close-up look at the dilapidated building with its hand-painted signs and tributes to the Jersey Lily. And bullet holes, all over the place.

Texas has a way of making itself memorable. Outside of Hondo we saw the rack lights of a police car inviting us to pull over. Susan was at the wheel, concerned lest she should be blocking the cop – she believes herself to be immune to retribution you and I suffer for our transgressions – and was astonished to think that she might have been caught at something.

“Reason I stopped you, ma’am,” the policeman said politely, “is because you have a taillight out.”

“Oh, thank heavens,” she said with a sigh. “I thought I was speeding.”

In the passenger seat, I tried to make myself small and invisible.

“Well, you were goin’ a little fast back there through town,” he drawled. “But I wasn’t clockin’ you.”

I could never have gotten away with that. In general, I took the wheel for city travel and Susan drove the open-road sections, which gave me a chance to work out my aggressions and her a chance to relax. We’d been warned about the treachery of California’s Donner Pass, but were still unprepared for the steep, twisty venue often visited by dangerous weather. There was a fatal accident the day before we went through, and a fatal accident on the day that followed. All we got to see was a comparatively unremarkable overturned car as we went through, and I report this in the same blase tones as the local newscasters.

It would never occur to me that I’d have to reorient myself to an ocean, but the Pacific threw me a little. Having lived all of my life in the East, near the Atlantic, I’d come to accept that you face an ocean and the north is to your left.

Standing on Point Reyes, north of San Francisco, I was shocked to realize that not only was my sense of direction thrown topsy-turvy – I was also facing Japan.

There are plenty of romantic-setting ingredients in California, but eucalyptus trees aren’t among them. We thought it was exotic when we camped out beneath a stand of them. It wasn’t. They stank.

We’re just getting onto Interstate 88 now, having taken 81 up through Pennsylvania. It’s still as pretty here as anywhere else we saw and I suppose we’re a little glad to be getting back. Even though it’s sad to realize the excursion is all but over. We checked in with a lot of far-flung friends during the past four weeks and made some new friends as well, people we plan to keep in touch with.

About the only mishap that occurred seems somewhat metaphoric. It took place a few hours away near Washington, D.C. We were supposed to stop in and see friends in Alexandria, so we got onto the Beltway to make the approach.

The highway was jammed with cars, at 11 p.m. on a Friday. All of them hitting 70, 75 mph. Exit signs whipped by with little warning, and I always seemed to be three lanes away from the ramp. I missed Alexandria and drove to the next exit, figuring I could turn around.

Wrong. I was shot onto another highway system, with its own ramps and exits. Could I turn off from that? Nope. I chose a succession of one-way streets, each filled with the same manic traffic, until I finally pulled into some corporate parking lot to reassess our plans. It was approaching one in the morning.

“Our friends will be disappointed if we don’t get there,” said Susan.

“They shouldn’t have moved here in the first place. These roads are insane.” I found a likely-looking combination of highways to get us out of Maryland entirely and proposed a change of plans: overnight at a rest stop and home.

As I said, itineraries are for the birds. I’m looking forward to being back for a while.