From the Vault Dept.: Today’s Metroland features my review of More Perreca’s, a restaurant in Schenectady’s Little Italy section that is a recent outgrowth of the almost century-old bakery that made famous the Perreca’s name. Here’s a piece I wrote 25 years ago about that bakery.

NORTH JAY STREET, SCHENECTADY, 1 a.m. A couple of bars on the street are still open. A rattling freight train lumbers by. Otherwise, the street is very still. It is mostly residential, a row of two-story buildings behind which looms the old locomotive works. The shops in this neighborhood are remnants of the time when the population here was solidly Italian. 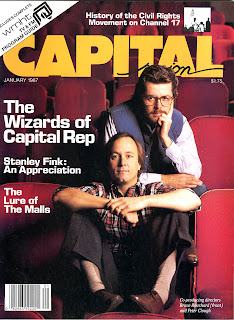 A light is on in the back room of Perreca’s. Dominick Papa is moving sacks of flour from a hallway, where they sit stacked to the ceiling, into the bakery proper. Then, using a simple recipe, he adds water, salt and yeast. A simple recipe, yes, but there’s a technique, a style he shares only with his brother and son. It came from Salvatore Perreca, the immigrant who 73 years ago in this city founded the bakery that bears his name. The result is a loaf of thick-crusted bread, which is without peer in the area.

“There were three brothers,” Dominick reminisces. “Felix, Jimmy and Salvatore, who came over here from Naples. Salvatore was the oldest. They all started a bakery over on John Street, and then they went their separate ways. Each started a bakery of his own. Salvatore came to this street, and it’s the only one of the family’s bakeries that’s still going.”

Dominick’s entry into the business came, ironically, as a customer buying bread. “I liked the girl who waited on me,” he says jovially. So he asked her out. She was Perreca’s daughter. By the time they got married the older man was ready to retire. So Dominick Papa took over in 1958 and Perreca showed him how to make the bread.

We take diversity for granted in retail operations, but Perreca’s stubbornly sticks to the product it does best: Italian bread. It’s all they bake back there. A small storefront opens when the first batch is ready, “at approximately 7:45 a.m. We’re open till about 5:30 p.m., or whenever the bread runs out.” Those are weekday hours; on Saturday the first batch emerges at about 6:30 a.m. and the bread sells out by 3.

You’ll find milk and cheese and sausage at the store, and olives and pepperoni and a few other such items. But it’s mostly the bread, long, round loaves that come in two sizes. You see them in a row through the window, lined up like artillery. This time of the year the window is frosty from the inside warmth and just the shimmer of the bread can be seen, like a promise.

The dough goes into a mixing/kneading machine from the Peerless Bread Machine Co. in Ohio. “My father-in-law got that mixer used in 1922,” Dominick explains. “It works fine today. We replace a part every now and then and keep it oiled, that’s all.”

There is this sense of scrupulousness about the whole establishment. Everything is terrifically clean. Walking from the storefront to the bakery brings you through a pantry where an antique hutch holds an array of spice tins, and through a kitchen with an old metal table in the center and an old-fashioned refrigerator against a wall.

And then you’re in the bakery. Toward the wee hours, the proofing bread fills the street with the unmistakable aroma – like warm beer – of fermenting yeast. When the dough is under control, it becomes time to light the oven, just two small doors in along brick wall. A load of coal is shoveled from a bin into the door on the right, banked and lighted.

“This is a computer-controlled oven, you know,” Dominick says with a straight face. “We have a special way of telling when it’s ready for bread. You see this handle on the door?” A small chrome circlet hangs off the latch. “You just do this—touch it. If it’s too hot, then the oven’s ready.”

Dominick has a classic baker’s appearance, round where roundness settles. His face and eyes are round; when he smiles his cheeks puff out into hemispheres. A fringe of graying hair garlands his head; and like anyone who works with heat, there is a tanned, tough look to his skin.

At about 4 a.m. he is joined by young, thin, bearded Clyde Conklin, who works on the oven before getting the dough ready for baking. Round loaves are shaped by hand; long ones are rolled by  machine.

The roller and mixer are the only mechanical pieces in the room. Everything else is done by hand. When the oven is filled and the bread starts to brown, it looks like a city of clay rooftops in there, lit by the underworldly flicker of burning coal.

When that first ovenful is ready, a couple of hours later, a crew augmented with more of the family goes to work bagging the bread for delivery.

Perreca’s bread doesn’t go too far. “Even Scotia is too far for us,” the baker says. Dominick’s son takes the van out to local shops like Codino’s on Van Vranken Avenue, one of the city’s largest Italian specialty stores.

But most of it goes out through the front door as car after customer car pulls up by the curb. “Give me one large round and two small longs,” is a typical order.

Price Chopper wanted to carry Perreca’s bread, but Dominick decided it wasn’t worth the trouble. “We’re not that big an operation. And you have to rent your shelf space. I don’t like that. Too much money goes back and forth under the table when you start dealing with the big stores, and then they don’t pay you for three months.”

This has been the despair of Perreca’s fans outside of Schenectady, who would like to see the bread infiltrate more of the area. “It’s the best there is,” says Jim Rua, chef-owner of Albany’s Café Capriccio. “And what makes it so special is that there just aren’t any other brick oven breads around any more.” If Rua has been near Schenectady on any given day, chances are you’ll be served Perreca’s bread with dinner at his restaurant.

This fierce support continues even as the neighborhood blurs into an ethnic collage. “Most of our customers aren’t Italian,” says Dominick. “But we have a lot of loyal customers. People who come in after their kids move out of town and they’re on their way to a visit and have been asked to bring a few loaves. That kind of thing.”

There’s a pot of tomato sauce bubbling in back of the shop. The sauce goes onto a flat tray of pizza dough to sell by the slice. Or, if you like, you can buy a bag of the uncooked dough.

What keeps this tiny business going? Loyal support, of course. But there is also a terrific pride in the product. “It’s good bread,” Dominick says, and there’s no false modesty in his voice. Most of the world seems to have forgotten what good bread is: it’s not the mushy white stuff the color of mayonnaise. It’s hard-crusted, damp, a little chewy.

“You can have a diet of this bread and pasta, you know, and never gain weight.” Dominick sits in padded dignity at the metal table and grins. “Just as long as you don’t eat sweets. But who wants to give up sweets? I don’t know.” He shakes his head. “Some people don’t like to eat. Some people live on a diet of lean meat and cottage cheese. That would drive me batty!”

With the first batch out and ready to go and selling quickly in the little store, Dominick and Clyde get the second batch going. Proofed while the first load was baking, it is shaped and laid into the freshly stoked oven.

Everything moves on long-handled paddles, like the ones you see the pizza bakers use – but these paddles have handles 10 feet long to get to the far wall of the deep oven.

Dominick and his brother, Robert, trade duties from week to week. The secret of Perreca’s bread is now part of the Papa family. “My brother and my son and I know the mix and what little bit of a secret there is,” says Dominick. Then he points to his head with a forefinger. “And I keep that secret up here.”

But the secret is obvious. It’s patience and pride, a pair of ingredients that the big companies omit from the recipe.