From the Bookshelf Dept.: While we await the next Pynchon novel – the most recent was Inherent Vice, in 2009 – here’s a look back at one of the best books of 1997.

IN A CLEAR-CUT CASE of not seeing forest for trees, we in this country forget that it’s been a literary character for three centuries. Even as it captured the fancy of European explorers, it picked up and put new faces on their prevailing mythology: representations of Good and Evil abounded in the country’s strange inhabitants and in the seemingly endless country itself, a Great Unknown begging for conquest as the Age of Enlightenment set in. 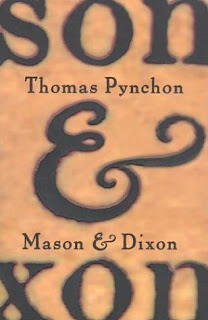 Leslie Fiedler’s Love and Death in the American Novel details the evolution of a national literature that unconsciously swept up those images, and it could serve as a primer for Thomas Pynchon’s Mason & Dixon. Except that Mason & Dixon is utterly self-conscious about everything it does, to the point of acknowledging America as Europe’s dream of possibility. And it’s written in a throwback literary style that, against all odds, succeeds magnificently.

Pynchon’s novel is set in the 18th century, and so borrows the language and style of that time – most notably in vocabulary and punctuation. Also, the story is presented, fittingly, as a post-prandial tale narrated by the Rev. Wicks Cherrycoke, a colleague of the eponymous surveyors, complete with interruptions from the narrator’s audience. Nevertheless, there’s an up-to-date urgency about the writing style, with scarcely a passive voice to slow it.

Charles Mason and Jeremiah Dixon were astronomers sent to this country in 1763 to chart the well-known line dividing North from South. In the novel they’re presented as comedy-team buddies, Mason the brooding London sophisticate, Dixon a priapic Geordie. By the time they reach these shores, 250 pages into the book, we understand their differing points of view and are ready to accept them as the tour guides through this unknown land.

Key to understanding the seeming mishmash of ingredients is a scene in which Dixon (who can fly) travels to visit the inhabitants at the center of the Earth, who tell him that his task will doom them: “Once the necessary Degrees are measur’d, and the size and weight and shape of the Earth are calculated inescapably at last, all this will vanish.”

Reason tells us there can be no such inhabitants, and so there aren’t. Cherrycoke at one point likens his saga to a Baron Munchausen story, and in fact the novel, like those old stories, celebrates the American spirit by rebelling against the Age of Enlightenment.

This ties in with Pynchon’s celebrated pursuit of concepts of entropy, which particularly fueled his 1973 novel Gravity’s Rainbow, resulting even in the fragmentation of some of the main characters. Against the backdrop of 18th-century America, the twin Pynchonian spirits of chaos and conspiracy are given antic life: who will forget, for example, the exploits of the Redzingerites?

As in all of Pynchon’s work, humor runs a gamut from music hall stuff to the extra-literary. Given the style and setting, there’s also much humor of anachronism, impressively paced and (for Pynchon) understated. Annotators and other academics will have a field day with this novel – it’s already spawned what seems to be a major Internet industry of argument and analysis – but it’s also a terrifically fun read.

Pynchon’s underrated Vineland, published in 1990, was dismissed by many of his fans as a weak romp not at all in the Gravity’s Rainbow mold. Even the most churlish, however, has to acknowledge Mason & Dixon as a masterpiece, fulfilling every expectation and then some.