The Music Goes Round and Round

“THAT’S A PRETTY PIECE,” my wife declares. It’s a Schubert piano trio and we’re into the lively, surprising final movement.

“His publisher thought that this part of it was too long, and Schubert cut out chunks of it,” I tell her. “Something like a hundred measures. This is a recording that put those measures back.” Her response, not surprisingly, is the light-hearted grunt that signifies acknowledgment while avoiding further conversation. 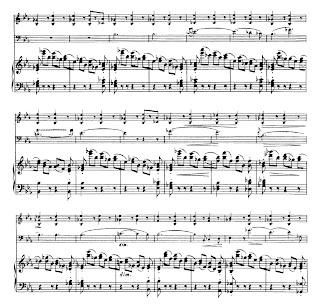 So: “If you knew the piece better,” I go on, “you’d find it startling.” She fails to ask why, so I explain anyway. “The form of the movement is very unusual, a kind of rondo-sonata form hybrid. And he throws in the theme of the second movement a couple of times. You remember what sonata form is, right?”

As a high-school student, forced to suffer through music appreciation classes, I took little interest in the musical forms being taught. But this probably had more to do with my own stubbornness, because I pursued that knowledge soon thereafter.

And I’ve been evangelizing this knowledge in my living room ever since, which means that Susan has been putting up with nearly 30 years of my cultural enlightenment attempts. “You’ve certainly told me often enough,” she says, and I understand again that it’s a lost cause.

Time was when I took this personally, and am embarrassed to recall how grumpy I would get. “Why do I have to know these things?” she’d cry, and I had no amiable answer. “Because it’ll increase your enjoyment of the music,” I’d say, and her tough-to-challenge reply was, “I enjoy the music already.”

It’s taken me these many years to accept the fact that she and I are brain-wired differently when it comes to caring about the nuts and bolts of the tunes, yet her obliviousness to the mechanics of, say, a minuet and trio doesn’t seemed to have dimmed her enjoyment of one of them. Whether the repeats are properly taken or not.

The pieces I know well now carry a mental overlay of a structural map – or as much of one as I’ve been able to figure. When listening to unfamiliar works, I find myself immediately trying to impose a form. I’ve begun to worry that I no longer can appreciate a series of melodies without a road map, which takes me away from the pure abstraction of music.

Or can we truly regard it as all that abstract? It is – or should be – a visually unmediated form, which gives faster access to the emotions. But the brain craves structure. It can’t help but hang a story off the sounds going by.

I’ve been trying to listen to some of my favorite pieces anew, banishing from my consciousness the foreknowledge of what happens next. Listening to them, in other words, in a manner characteristic of my wife.

What I’m discovering is what you’ve probably known all along. The best composers use those forms as tools to achieve a greater purpose, which is to create a dynamic emotional effect. Certainly the sonata form evolved to enhance that effect, but as Charles Rosen observes in his book Sonata Forms, you won’t find slavish adherence to its parameters in the best-known pieces from the classical era, and as we head into the Romantic era and beyond, a surge of mavericks, following Schubert’s lead, played even more freely with precedent.

Take the first of three big piano-variations pieces from the past three centuries. To describe Bach’s Goldberg Variations merely as a pretty theme that goes through 30 permutations is to acknowledge only the outermost bones of its skeleton. For starters, the theme is almost disposable; the variations have more to do with its bass line than any melodic characteristics.

But it’s also a collection of dances, a toccata, allemande, and gigue among them. Every third variation is a canon, each on a successively higher tone. The final variation quotes popular songs of its era. Yet the thing has a cumulative power. Even if you’re hearing it for the first time, you can feel the emotional swell leading you to the finish.

Beethoven’s Diabelli Variations seems to some – including pianist Alfred Brendel – a large-scale joke written with such high degree of wit that it stands as a monumental piece of music even as it tweaks the theme – which came from a Vienna-based publisher – and some of the then-popular variation variations. Beethoven drew fun and lively studies from the smallest fragments of the theme, as in the ninth variation, where its opening three-note figure (with grace note) provides the material.

He, too, quotes older material – in this case, a theme from Mozart’s “Don Giovanni,” showing its resemblance to Diabelli’s theme. And he finishes with a hearty fugue followed by an ethereal minuet. Again, the cumulative effect is there whether you’re aware of the details or not.

Frederic Rzewski was commissioned to write “The People United Will Never Be Defeated!” in 1975 as a companion piece to the Diabelli Variations. Following a straightforward statement of the politically charged Chilean theme, the piece goes into six sets of six variations apiece, with the last variation in each set harkening to the five that preceded it, and the final set of variations each summing up each of the first six sets in order.

In other words, it has about as detailed a form as you can imagine, with even more intricacies built into the sequence of variations and the required piano technique. But when you reach the end of it – well, you know where I’m heading. As with the Goldberg Variations, the final, simple restatement of the theme brings a sense of emotional satisfaction and accomplishment.

So I extend this question to the audience at large. Do you know your musical forms? Does it matter? I can’t imagine being without this information, yet I sit in concert after concert surrounded by (or at least next to) those happily untroubled by such stuff. “I just like listening to the music,” my wife protests. Leading me lately to wonder if I’ve gotten a little overburdened.

Nope. Call me a snob, but I just checked in with Mozart’s Violin Concerto No. 5 and, as always, the transition from development to recapitulation seems all the more exciting because I know what’s going on.
Posted by B. A. Nilsson at 8:44 PM