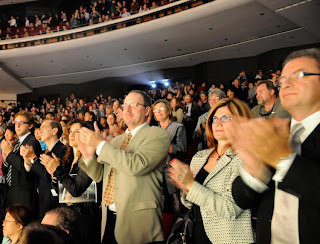 CLAUDIO ABBADO LED the Berlin Philharmonic and soloists Barbara Bonney and Bryn Terfel in a performance of Brahms’s “German Requiem” in 1997, a stunning performance available on DVD. An unexpected moment of incredible beauty comes at the end of the piece, when the combined forces of the power of the performance and Abbado’s own dynamic presence keeps the audience hushed for a long, long time after the last note died away. Eventually, of course, applause broke out, but we got a taste of the luxury of silently savoring a beautiful finale.

I’ve attended many musical and theatrical performances after which I wished we could depart in silence, allowing each of us to visit the many colors of the kaleidoscope of emotion that great art provokes. I know it’s too much to ask for. So could we at least do ourselves the honor of saving the standing ovation for when it’s truly justified?

Although my schedule forces me to be selective about what performances I review, I don’t believe I have any special talent for picking the winners. Yet just about every concert or play I attend finishes with an ovation. I’d like to think it’s because we in the Capital Region are passionate, loving people, eager to confer our approbation upon those who entertain us, but I’m more inclined to put it down to a nervous wish to not appear uncultured.

In a May 17 New York Times piece, Ben Brantley noted with shock a theatrical production he attended that didn’t finish with the crowd leaping to its feet, and he begs, “officially and urgently, for the return of the sitting ovation. Because we really have reached the point where a standing ovation doesn’t mean a thing. Pretty much every show you attend on Broadway these days ends with people jumping to their feet and beating their flippers together like captive sea lions whose zookeeper has arrived with a bucket of fish.”

He puts it down to a new audience of unhip tourists thronging the shows, which increasingly are designed to appeal more to the bridge-and-tunnel crowd than to the Theatre Guild types. Perhaps it’s a nervousness similar to that which seems to infect Capital Region-ites. “If we’re not as eager as we can be,” it suggests, “it might seem as if we don’t understand the performance.”

Not that such challenges abound. I have long hoped that our proximity to Manhattan – and comparative inexpensiveness – could make the Albany area a cultural tryout spot, where theater and music and dance and you-name-it could be tried out and tweaked. What comes across instead, at least where my review beats are concerned, is parade of the tried and true.

Classical music programs rarely venture even far into the 20th century, let alone anywhere this side of the millennium. A recent Troy Music Hall performance by Brooklyn-based orchestra The Knights was woefully underattended, which I complained about to a musician friend, saying, “They played a number of pleasant newer works, but there also were old pieces by Ives and Barber and Copland that should have brought in an audience.”

He looked surprised. “Ives and Barber and Copland?” he said. “You’re calling them old?”

David Alan Miller is a brave and enthusiastic champion of new music, which he features in any number of creative contexts with the Albany Symphony. Two years ago, they opened a concert with Schoenberg’s “Transfigured Night,” a gorgeous work written before the composer adopted his twelve-tone approach, as tuneful and moving a piece as anything by Mahler or Schubert. But the word “Schoenberg” was enough, I was told, to keep the fraidy-cats away. (But those who showed up obligingly leaped to their feet at the finish.)

There’s another type of ovation, the sympathy hand, that’s an area favorite. It’s the one that says, “Well, you did your best.” A top-flight chamber group that performed here recently suffered some embarrassing flubs, one of which was enough to require a re-start, and the ovation that followed seemed even more embarrassing for its total lack of deserved-ness.

Thus it was at a recent theatrical performance I attended. The play finished; the actors took their bows. The audience applauded; the actors exited. The audience kept on clapping; the actors returned. Then, like a pot of popcorn beginning to erupt, a few brave souls bobbed up into crouches, busily eyeing the rest of the house to be sure they weren’t alone. And this seemed to be enough to prompt the rest of us to obligingly ovate.

If we didn’t have to worry so much about applauding, we might now have to worry so much about when to applaud, which is tricky in the classical music world. And if you feel insecure about it, let me assure you that I find your uncertainty preferable to the snob-act of some (opera fans are the worst in this regard) who make sure to bang together their palms at the first available micro-second after the end of something in order to declare to the rest of us, “I know when to clap.”

I’d just as soon be spared the between-movements applause of those who know no better, but that problem would go away if we were relaxed and comfortable enough to applaud when whatever just happened was truly moving. A feisty first movement? An incredible solo? Let ’em know you liked it!

Brooklyn Philharmonic director Richard Dare argued in a recent Huffington Post piece
that the supposed rules of classical concertgoing are too intimidating, and he comes to much the same conclusion as I give above, although he reaches it in a snottier, more labyrinthine way.

Musicians, actors, anyone who works onstage wants to be appreciated for that effort. They’re in touch with us throughout the gig, able to feel when the audience is engaged, all too aware when the attention goes away (that’s when the coughing starts. In Schenectady, it then never stops). So they want to bask in that love in the end. But let’s make it sincere. Too often, I fear we leap to our feet because we fear the performers won’t like us! Let’s try to make it about them instead.