The Autobiography of Mark Twain

From the Slush Pile Dept.: Here's a review I wrote for Metroland in April, 2011, of a long-anticipated book that proved a delight to read. I'm afraid I got a bit sidetracked by the self-indulgent Garrison Keillor review. Twain's writing is timeless, and this book helps keep it that way. 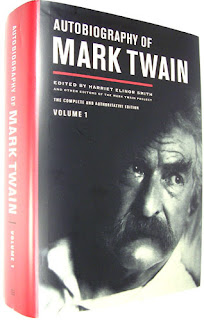 IT’S BEEN A CENTURY in anticipation, and yet it turns out we’ve seen much of this material before. Twain wrote a few autobiography fragments over the years and in the twilight of his life dictated many thousands of words more, with the provision that it not see print until a hundred years after his death. Then he promptly turned around and published a bunch of it.

So, too, did two of his literary executors and a biographer, each of whom cherry-picked material. So you may have seen much of it before, but this new Autobiography, the first of three fat volumes, collects everything, false starts included, adds a thoughtful, informative, slightly overlong introduction, and annotates the text with notes galore that wait, unobtrusively, at the rear of the book.

With the successes of Huckleberry Finn, Tom Sawyer, Life on the Mississippi, The Innocents Abroad and so many other titles behind him, Samuel Clemens believed that his own story would be of interest but fretted that there it would never be as truthful as he would wish.

So he devised a fresh approach: “Start it at no particular time of your life; wander at your free will all over your life; talk only about the thing which interests you for the moment; drop it the moment its interest threatens to pale, and turn your talk upon the new and more interesting thing that has intruded itself into your mind meantime.”

Last December, writing in the New York Times, the tiresomely cranky Garrison Keillor dismissed it as a “wonderful fraud” and complained of such things as Twain’s “mind-numbing inventory of the Countess Massiglia’s Villa di Quarto, which he leased in Florence” upon a physician’s recommendation to treat his ailing wife. “His wife is dying,” grumps Keillor, “and he compiles an inventory of furniture.” Keillor’s mean-spirited, wrongheaded rant comes across as jealousy because this long-dead genius still racks up better reviews than Keillor typically can muster.

While Twain’s autobiography has more than its share of flaws, they’re unsurprising considering the book’s provenance as an intentional ramble, and other critics have pointed out that its author, in effect, invented blogging.

Let’s dwell instead on the glories to be found within the Twain tome. As far as his search for self-revelatory truth is concerned, don’t hold your breath. He’s telling oft-told tales that veer, as the endnotes reveal, quite widely from what’s confirmable. Thus the portrait of a 70th birthday celebration for John Greenleaf Whittier, a celebration that included Emerson, Longfellow and Oliver Wendell Holmes in the audience and therefore in a carefully rehearsed joke Twain told – and which, he reported, backfired so spectacularly that threatened to ruin the speaking careers of both Twain and the hapless fellow who followed on the platform.

In fact, say newspaper accounts, the joke went well and all other speakers were well received. But do we care? Twain was masterly at making himself the butt of his tales, and they remain as funny as ever. I’m sure he told the story of how his wife discovered his penchant for swearing again and again, so by the time he committed it to this book, it was well crafted.

And I’m delighted to be offered a volume in which the subject’s life is not presented chronologically. The free-associative leaps of time and subject are lively, revealing and often as funny as the deliberate jokes.

More serious notes intrude, as with the passages crafted around the death of his daughter, Susy, when she was 24 and he was 61. Overseas on a lecture tour at the time, Twain was emotionally devastated and even ten years later, when dictating the story, his tone is soft and serious but the writing remains just as deft.

Almost half of the book is given to fanatically researched explications of the text, most importantly helping provide contexts for incidents the histories of which have faded, like the once-shocking scandal of Mrs. Minor Morris and Theodore Roosevelt’s White House – which Twain easily predicted would become obscure.

There are long stretches, especially among the earlier sketches, that hold little grip, such as Twain’s mythologizing of Ulysses Grant (whose autobiography Twain published). But the most remarkable aspect of the book is the prescience it reveals. Twain was ahead of his time in his views on social and political issues, predicting the extremes to which oligarchical capitalism would take this country. His complaints about then-contemporary politics eerily foreshadow what goes on today, and he, an ardent labor union supporter, probably would be unsurprised by the vigor with which the billionaires’s office-holding lackeys are attempting to eliminate them.

He also held progressive views on race relations, making it all the more ironic that so-called Twain scholar Alan Gribben of Auburn University could argue in defense of his recently edited Huckleberry Finn edition – the one notoriously replacing “nigger” and “injun” with “slave.”

Which may only be further worthy testimony to Twain’s staying power. The Autobiography has become a recent hit, making him the only author to have best sellers in three different centuries, and the stories within remain as inviting as ever.

The Autobiography of Mark Twain, Vol. 1
Edited by Harriet Elinor Smith and Other Editors of the Mark Twain Project
University of California Press, 760 pp., $34.95
Posted by B. A. Nilsson at 4:31 PM