How I Spent My Summer Vacation Dept.: This piece appears in the current Metroland, but because I like it so much, I'm also giving it a spot here. According to snopes.com, people believe that the act I describe below could wreak havoc with a train. I'm here to tell you that it doesn't. You just have to watch out for flying pennies. 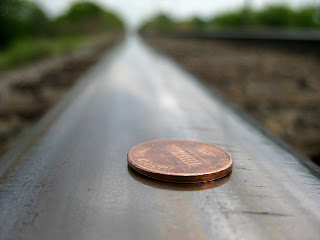 I REMEMBER THE remarkably scarred and veiny hands of my next-door neighbor, Kurt. They were hands that worked hard, unlike my own, which were pasty and smooth. I longed for the day when I’d have hands like his. I was six. He was ten.

We lived on shady South Maple Avenue in Glen Rock, New Jersey, and the summer after the end of my kindergarten year, I sought Kurt for company. Because of my size, I could almost pass for my friend’s age, and the couple of his classmates who often joined us accepted my presence with very little teasing.

“Hacking around,” Kurt called it, this process of exploring a warm-weather day. The only appealing electronic distraction in 1962 was the television, and daytime programming ran to a repulsive mix of news shows and soap operas.

“Where are you going?” my mother would call as I pounded down the stairs.

“Going to play with Kurt,” I’d holler back. “Hacking around.”

“Stay on this side of the street,” she’d caution. “If you want to go across to the schoolyard, let me walk you there.”

The schoolyard, with its crusty teeter-totter and jungle gym, held no appeal. And the agenda was out of my hands: Kurt and his friends lived in a larger neighborhood. This particular June day, representative of many, began with a stroll along our street to its intersection with Ackerman, my theoretical limit. We crossed it and kept on, towards the town of Ridgewood.

I remember almost nothing of our conversations, except that I participated only rarely, aware that each time I opened my mouth I revealed my comparative immaturity. These older boys were my heroes, my ideals, and I figured that the best way to sustain their approval was simply to quietly emulate them.

When one of them suggested taking an unfamiliar pathway that led away from the street, I joined right in. The joy of being part of the group far outweighed any threat of punishment. We walked alongside an ever-deepening gulch that required us to hug the wall of a narrow cliffside pathway, shuffling sideways. I was terrified. I was thrilled. Heat and dirt made the passage even more uncomfortable. I didn’t care.

We soon came to the railroad tracks. “I brought a coupla pennies,” said one of the boys. We hopped from cross-tie to creosote-stinky cross-tie between the sun-hot rails. When a not-too-distant rumble promised a train, we dived for the scrub that flanked the tracks – but not before I was shown how to balance a penny on a rail-top.

The train roared past. The penny vanished. We searched in vain. But the morning yawned ahead of us, delivering another train, then another, each time sending us into that scrub in a frenzy of giggles.

It must have been the third try that succeeded. Someone spotted the copper gleam a considerable distance from where we’d placed it. It was still hot to the touch. The coin’s diameter seemed to have doubled, and it now tapered at the rim. Lincoln’s bloated face was barely discernible.

I was home by lunchtime, as required. Would there be more adventure this afternoon? I didn’t know. These boys lived in the moment, a wonderful contrast to the adult world of planning the life out of everything.
“What did you do this morning?” my mother asked.

“Nothing,” I told her. “Just hacked around.”