WITHOUT MUCH FANFARE (that came across my desk, at least), Sony Classics released a lavish 120-CD box set of conductor Eugene Ormandy’s Philadelphia Orchestra recordings. Ah, but it’s more and less than that. Less insofar as it includes not a single one of the maestro’s many stereo essays with that orchestra; more because it gives us his mono-era legacy, a cornucopia of recordings many of which have long been unavailable. 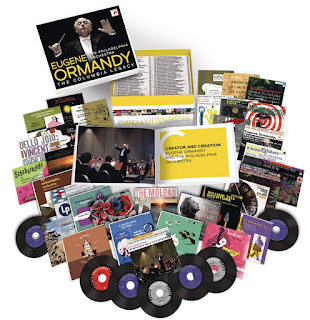 The question often posed by others has been: Was it worth it? This is where the rickety Ormandy legacy comes into play. He led the Philadelphians for 44 years, taking the reins from the flamboyant Stokowski. He maintained the lush sound for which the orchestra already had become famous, with an always-distinguished array of first-chair players to tackle any tricky solos.

Ormandy’s musicianship is rarely impugned, but his work has often been damned with faint praise, with suggestions that there’s a mediocrity about his interpretations. Even the opening paragraphs of Wolfgang Stähr’s booklet essay in the set make needless apologies for Ormandy’s conducting.

In none of the reviews of this set that I’ve encountered is there unalloyed praise. On a classical-music Usenet discussion group, comments have been snotty, if not downright brutal – but such groups are best avoided if you’re looking for considered discussion. So what on earth is wrong with this set?Nothing. Well; there’s a technical problem with CD 103 in the original pressing, where the end of Ravel’s “Tzigane” is cut off, but you can easily get a replacement disc from Sony. Other than that, the set is a wonderful showcase of an orchestra and conductor who achieved world-class pre-eminence and weren’t shy about committing their performances to discs.

And their Columbia years started off, energetically enough, with a session on November 19, 1944 that captured Beethoven’s Seventh Symphony, Brahms’s Fourth, and, with violinist Nathan Milstein, Lalo’s Symphonie Espagnole (in the four-movement version that typically was presented back then). There were some pickup takes for the Lalo the following March, but still – that’s a lot for an orchestra to get through in a single session, never mind the fact that they did so so well.

Which leads us to Ormandy Problem No. 1: He’s hard to pigeonhole. His repertory is all over the place (which isn’t a bad thing). Like Stokowski, he made Bach arrangements that are recorded here. Can you tell they’re coming from a violinist (Ormandy) rather than an organist (Stokowski)? I can’t. But they’re a big contrast to the sounds the historically informed performances crowd has sent to our ears for the past few decades.

You’ll find him conducting only three Beethoven symphonies in this set, but there’s a killer Ninth from 1945-6 among them. All five piano concertos, with Serkin, are here (and the last three again with others), and there’s a superb Violin Concerto from 1950 with Zino Francescatti.

All of the Brahms symphonies are in this set, and Francescatti again for an affecting Violin Concerto. I’m not as sold on the 1945 version with Joseph Szigeti, but my problem is Szigeti’s lackluster approach, not Ormandy’s always-faultless accompaniment.

Otherwise, there’s no attempt to present much of a complete anything. The usual suspects are represented, with symphonies by Schubert, Dvořák, Mendelssohn, Sibelius, and Tchaikovsky, not to mention a smattering of Mozart and Haydn. And there’s Oscar Levant’s masterful recording of “Rhapsody in Blue.” Stravinsky’s Big Three ballets sound as fresh as they still must have seemed when these forces recorded them in the early 1950s.

And there are some more recently written pieces among the gold, such as recordings of Prokofiev’s Symphony No.7, made a year after its composition, Vincent Persichetti’s then-new Symphony No. 4 and Roy Harris’s Symphony No. 7, recorded in 1955 following a recent revision.

Among the many American composers represented are Samuel Barber, Norman Dello Joio, Howard Hanson, Walter Piston, and born-in-Philadelphia-to-Armenian parents Richard Yardumian, including Anshel Brusilow playing Yardumian’s lovely Violin Concerto, and even other Philadelphia-based composers such as Harl McDonald and Louis Gesensway (who also played violin in the orchestra).

The most outré of the outings was probably a set of selections from Berg’s “Wozzeck,” which would have seemed more revolutionary when it was recorded in 1947. The only complete opera in the collection Strauss’s “Die Fledermaus,” with English-language book by Garson Kanin and lyrics by Howard Dietz, both masters of their crafts, featuring Lily Pons and Richard Tucker.

If there’s a lot of shorter works by Johann Strauss, you’ll find generous well-realized helpings of works by Richard Strauss as well. There are some ringers slipped in. You’ll find Andre Kostelanetz conducting music of Richard Rodgers, Bruno Walter conducting Beethoven’s “Pastoral” Symphony and Schubert’s “Unfinished,” even a couple of George Szell and the Cleveland Orchestra recordings of Haydn and Hindemith, usually the result of Columbia’s oddball LP couplings, preserved here.

In other words, these 120 CDs truly have something for everyone. Yes, they’re in mono. Does that really matter when the mastering is as good as you’ll hear here?

The unwarranted criticisms of Ormandy and this CD set come from what I believe is Problem No. 2: Ormandy’s appearance. Unlike so many of his fellow baton-wielders, he didn’t look crazy or martinet-like. He wore a pleasant smile on a cherubic face (picture “Peanuts” character Charlie Brown on the podium) and thus gave ammo for the classical-music snobs to invent invective. Just as Heifetz was long slammed for being “cold” based solely on his appearance, so Ormandy no doubt is being judged on his appearance. Hook your ears to a discerning brain and you’ll hear the truth.