MOSAIC RECORDS, that scrappy little jazz-reissue house that specializes in offering handsome, thorough, excellently remastered sets, has been very attentive to the Louis Armstrong legacy. First there were six CDs covering the Decca recordings of the All-Stars from 1950-58, then all of the (pre-All-Stars) Decca studio recordings from 1935-46 (six CDs). Most recently we switched labels (as Armstrong did) to get the All-Stars recorded live between 1947 and 1958 for Columbia and RCA (a whopping nine discs) ... which set the stage for what happened next. 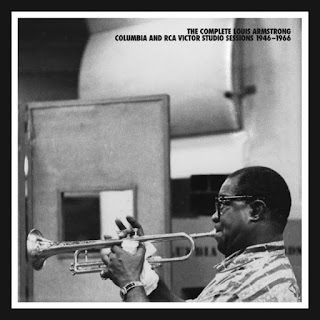 The latest Mosaic Armstrong release stays with those two labels (now both owned by Sony, which makes such reissues easier) but goes back to studio recordings – specifically, seven discs’ worth that cover the last of his big (and I do mean big) band recordings for RCA, and three concept albums he cut for Columbia. All material that’s been reissued before on the original labels, but not in audio quality like this, not with fantastic liner notes like this – and not with so many compelling extras.

The RCA years begin with a session put together to feature Esquire magazine’s 1946 jazz-poll winners, a list heavily influenced by the magazine’s columnist, Leonard Feather, who also helmed the recording session. And I’d like to salute Ricky Riccardi, who wrote the excellent booklet text (about whom more later) for his clear-eyed appraisal of Feather’s tiresome, meddlesome nature. There was a man who set himself up as a jazz savant in order to impose his own limited-interest opinions – and some mediocre songs – on a public looking for guidance.

In any event, it’s nice to start off with an ensemble that includes Duke Ellington and his bandmembers Jimmy Hamilton, Johnny Hodges, and Sonny Greer, as well as Charlie Shavers,  Don Byas, and others. It’s helpful because a few months later we’re back in the studio with an Armstrong ensemble of 18 pieces, primed to blow as loud as possible (Riccardi notes that we may have Feather to thank for that, too, as the erstwhile critic had whined in print about too-small ensembles). It’s not at all terrible – the worst of Louis is better than the best of many another, and this isn’t even the worst – and it was a last burst of big-band noise before the All-Stars format set in.

Amidst that noise are classic tunes like “Back o’ Town Blues,” “Do You Know What It Means to Miss New Orleans,” and “Mahogany Hall Stomp,” along with some reasonable not-quite standards and the expected quotient of forgettable plaints that producers seemed to think would take off. But a Hot Seven session with Vic Dickenson and Barney Bigard sneaks in there to record material to promote Armstrong’s upcoming movie “New Orleans,” and it portended greater things. By mid-1947, the big band was history.

But as 1948 dawned, another Petrillo-driven recording ban went into effect. The first, starting in 1942, cost us the sounds of bebop’s formative years. This one was briefer but still as annoying, but it gave Louis a chance to sever ties with RCA, where the material he was being given wasn’t to his liking, and try Decca once again, a label he’d stay with for the next five years.

Discs One and Two of the new Mosaic set cover the RCA studio singles from 1946-47, with much of that second CD given to the Columbia singles waxed between 1954 and 1966, including the “Mack the Knife” sessions with poor Lotte Lenya trying to figure out how to swing, an attempt to recreate Satch’s “Mack the Knife” success with a 1966 cover of “Cabaret,” and an oddball number that turned up on a cardboard flexidisc in a 1959 Look Magazine, “Music to Shave By,” also featuring Bing Crosby and the Hi-Los.

Great stuff, each in its own way, but the heart of this collection are the three LPs that Armstrong made for Columbia in the mid-‘50s. “Louis Armstrong Plays W.C. Handy” and “Satch Plays Fats” were produced by the legendary George Avakian, while “The Real Ambassadors” was collaboration with Dave Brubeck. We know these albums, we’ve nurtured them in our collections through their (sometimes rocky) journey from LP to cassette to CD – but none of it is like what Mosaic put together.

In a bit of a departure from the label’s completist philosophy, which prefers splice-free original takes, the originals of all three albums start off a sequence for each that features component and alternate takes, often with breakdowns and studio chatter. The two Avakian-produced albums, now considered classics, were a testament to his razor-blade skill as three or four different takes, in some cases, went into a single finished track. And given our familiarity with what was issued, it’s all the more fascinating to hear the warts-and-all components, especially the two long “St. Louis Blues” tracks (12 minutes and 9 minutes) that show how the song was shaped – and how well the band and singers worked with one another.

Armstrong was still officially a Decca artist at this time, and Avakian was only able to borrow him twice. “The Real Ambassadors” didn’t come about until 1961, at which time Teo Macero was enlisted to produce. Brubeck was impressed both by Armstrong as a musician and by the strong civil-rights stance the trumpeter took in 1957, so Brubeck and his wife, Iola, devised a scenario for a musical they hoped to bring to Broadway. In order to do this, they reasoned, they needed a demo, and fought for four years to get Columbia to record it.

The incredible success of “Take Five” gave Brubeck some carte blanche, which was needed: the sessions also included Carmen MacRae and Lambert, Hendricks, and Ross. What with the difficulties of getting everyone in the same room at the same time, there were some overdubs required, the components of which we now can hear in their nascent forms. The end result was not a successful release (although it was praised by Feather), something examined at length in Riccardi’s included essay.

And this is a good moment to praise Riccardi again. He is a tireless Armstrong champion, calmly fighting the ignorance that has crept into so-called jazz scholarship over the years. The received image of Satchmo is a tricky one, requiring a broad understanding of the roles of the races throughout the history of American music. Riccardi lays a précis of it out nicely here, but I strongly urge you also to read his two books of Armstrong biography: What a Wonderful World and the recent Heart Full of Rhythm. Meanwhile, grab this Mosaic set. They sell out quickly.