From the Theater Vault Dept.: This review speaks for itself, exposing me as the stick-in-the-mud that I am, a man whose early diet of Gershwin and Porter and Berlin scores inspired an oozing intolerance for more recent musicals. But I did my best to appreciate this experience eight years ago.

I AM THE ONLY MUSICAL THEATER FAN IN THE WORLD who has not been exposed to any form of the phenomenon that is Les Mis. The sprawling English-language musical version of the even-more-sprawling Victor Hugo novel opened in London in 1985, hit Broadway two years later and probably has offered actors more production contracts than any other recent show. 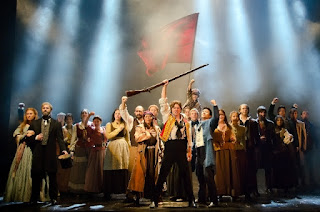 It’s a three-hour distillation of the Hugo’s tale of sin and redemption, politics and faith, and it plays every note of sentimentality and offers every trope of melodrama that can be crammed into its nonstop score.

You know the story. Noble criminal, bastion of moral and physical strength. Dogged pursuer, obsessed with duty. Orphaned waif. Bellicose students. Sewers. You probably know the score. “I Dreamed a Dream.” “On My Own.” “Bring Him Home.” A musical progression that never strays far from resolution, a festival of V7 to I, with plenty of plagal cadences for that spiritual-experience feel.

The songs rely on simple figurations endlessly repeated, pulsed to anthemic heights, relieved by moments of sardonic comedy, as in the brilliantly staged “Master of the House,” delivered with brio by Timothy Gulan as Thénardier.

To the consternation of some die-hards, this touring production did away with a scene-changing turntable in favor of more projections and scene carts. Being new to it, I missed nothing, and was very impressed with the fluidity of the changes and the striking pictures of the sets. Not to mention the backdrop projections, which had a pictorialist feel early in the show, giving way, once we’d gone through the 3D sense of the sewers, to abstract expressionism.

Although it’s a heavily-miked show, it still needs good voices, and we have the talents of terrific Broadway belters like Peter Lockyer as Jean Valjean, Andrew Varela as Javert, Devin Ilaw as Marius and Lauren Wiley as Cosette. Brittney Johnson stepped into the role of Éponine for the performance I saw, and she was outstanding, elevating “On My Own” to an affecting personal statement.

Condensing Hugo’s book into an easily digestible musical means eliminating most of the politics and philosophy and the subplots galore. We see the tragedy of the 1832 student rebellion, but it’s isolated from its anti-Orléanist origin. Never mind; this is populist fare, not Stoppard. At this point in its long life, the musical has become a machine, its workings time- and audience-tested.

As Javert contemplated his mission in the song “Stars,” the night-sky image behind took on more and more twinklers, turning an Alfred Stieglitz-like image into Thomas Kinkade. That’s the level upon which to enjoy this. Strap yourself in; it’s going to be a merry, manipulative ride.