From the Classical Vault Dept.: Contemporary classical music has had a strong area champion in the Dogs of Desire, an Albany Symphony-based ensemble that concentrates on small, current, often commissioned works. Here’s a review I found nestling near the “Les Mis” piece I posted yesterday.

THE NAME OF THIS ENSEMBLE, drawn from the very fine ranks of the Albany Symphony, was chosen by music director David Alan Miller when it proved, of the many choices he compiled, most distasteful to his mom. 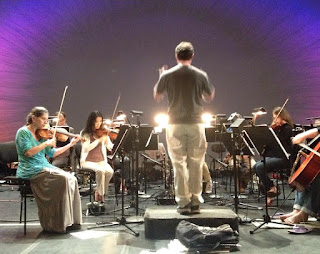 The Dogs of Desire is a large chamber group charged with playing new works, most of them commissioned by or on behalf of the ensemble. At this point in its nearly 20-year history, it has a long list of such works to draw from, but continues to seek out more.

Thus it was that we were treated to three world premieres, two of them written in collaboration with video artists. Putting music and moving image together creates an entirely different sensory experience that is provoked by music alone. Our eyes are sensory bullies, demanding the lion’s share of attention. Yet the addition of music, as film buffs know, deepens the emotional experience even when we’re not fully aware of it.

Amanda Harding’s “Venus Unhinged” also added the dimension of words, setting three poems by Eliza Griswold and one by Margaret Atwood, all of it exploring, as Harding explained, “the dark side of love.”

Micah Fink’s accompanying videos used primarily found footage, the concept of Venus’s travels wittily exemplified by images of the recent Transits of Venus, in which the black dot of the planet could be seen to travel across the sun’s fiery orb. Griswold’s “Epithalamion” was set, appropriately, to wedding ceremony footage – but it was grainy, vintage Kodachrome, the merriment of the images dimmed by their age. Fink skillfully avoided explicit video realizations of the texts, and Harding’s music compellingly fulfilled the twin challenges of suiting both pictures and words.

This wasn’t the case with Jay Craven’s hastily made video for Robert Paterson’s “Ghost Theatre.” The too-literal images were shot in a theater (minus its ghost light!) and attempted to make creepy statements with hand-held shots, depth of field changes and what seemed to be an actor wearing a sheet. The few sung moments were accompanied by close-ups of the text being scrawled on an index card. The moody, exciting score would fare better as an aural-only experience.

Jacob Cooper’s “Serenade” was a beautifully realized setting of a text by Zach Savich, a poem weaving emotionally fraught but context-free lines as if three or four poems had collided. Cooper’s setting had an Ives-meets-Glass quality, with a bass-enriched string quintet providing a steady chaconne-like bed while the brass and winds sounded in glorious discord. Vocalists Martha Culver and Alexandra Sweeton, whose work is never less than admirable, were particularly excellent in this piece.

Roshanne Etezady’s “Start It Up” started up the concert, a distaff motorcyclist’s dream given a jazz-rock styling, and if the message – “I say that the journey is more important than the destination” – was unsurprising, the fragmented finish (“I’m alone again”) was effective in its surprise.

Works by David Mallamud dominated the second half. As “Last Call at the Folies Bergère” (to give it its correct spelling) demonstrated, his pursuit of humor is hampered by the unfortunate tendency to employ sarcasm at the expense of wit, probably because any tradition of wit has been lost in the mind-numbing age of television-based entertainment. It’s a shame: as his rich orchestrations show, the man has talent.

The program finished with Ken Eberhard’s one-joke “Karaoke Time,” and Miller and Sweeton and ensemble obligingly offered the inevitable encore: Arthur Bloom’s “That’s the Way,” demonstrating KC and the Sunshine Band’s roots in J.S. Bach. I suspect that even Miller’s mom must like this one.

The Dogs of Desire
Conducted by David Alan Miller
EMPAC, May 31