Three to Get Ready

NOVELIST WILLIAM BOYD has long been fascinated by the movies. His 1987 novel The New Confessions combined a nod to Rousseau with an effective evocation of filmmaking in the 1920s; he has also adapted two of his novels for film and two for television. As if that weren’t enough, he wrote and directed the British war drama “The Trench” in 1999. 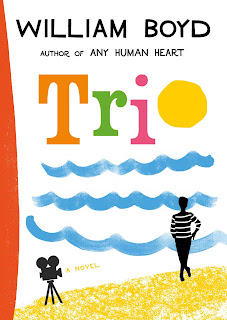 His is a protean talent: he has also written spy thrillers, one of which was an estate-sanctioned James Bond novel; his fiction has covered topics ranging from art to travel, war to international politics. And he does with a sense of humor in the Evelyn Waugh manner (whose work Boyd has adapted for television).

Boyd’s latest novel, Trio, takes us to world of motion pictures again, where he settles in very comfortably to give us a portrait of three movie-world participants and the variety of characters they have to deal with along the way. We’re in Brighton in 1968, where a company is filming “Emily Bracegirdle’s Extremely Useful Ladder to the Moon,” which seems very typical for a time that brought us such fare as “Can Hieronymus Merkin Ever Forget Mercy Humppe and Find True Happiness?,” “The Magic Christian,” and “The Bed Sitting Room.”

Threeness abounds in this book. We follow the protagonists through three different book-sections: “Duplicity,” “Surrender,” and “Escape.” Each has some manner of significant other, but another other soon comes on the scene. And the action cuts from one story to another with the deft rhythms of a good suspense saga.
The principal characters are billeted in rented houses or hotel rooms in the Brighton area.
Elfrida Wing is the wife of the Reggie Tipton, the film’s director, but we don’t witness much of a life together. She’s busy drinking as the story starts, an addiction that’s described with meticulous appreciation of an alcoholic’s obsessiveness. “There were two basic types of alcoholics, Elfrida realised, and she liked to categorise them as ‘Sippers’ and ‘Benders’. ‘Benders’ were out of control – wholly appetite-driven, consummation was rapid and destructive, swift oblivion was the aim. ... ‘Sippers’ on the other hand were more discreet and shrewd.”

She’s a successful novelist – she was termed “the next Virginia Woolf” – who has stopped writing and now shuns the fans who try to find her. Now, in Brighton, she finds herself not far from the home Woolf inhabited in 1941, when she drowned herself in the river Ouse. As much as Elfrida has long hated the comparison to the other author, she now concocts booze-fueled dream of writing a book she’ll title The Last Day of Virginia Woolf, retracing the dead novelist’s steps on that fatal day. But she’s borrowing the name of an American lighting designer to preserve her anonymity as she researches the topic.

We meet producer Talbot Kydd as he’s calming his ulcer with swigs of Previzole – which sounds like an actual medicine, but in a Boyd novel you never can be sure. He has a wife, Naomi; a daughter who lives abroad, and a son who plays timpani for the Hallé Orchestra. But he’s most often tangling with his producing partner, Yorgos Samsa, with whom he operates YSK Films Ltd. That Yorgos occupies two-thirds of the monogram and shares a surname with a Kafka bug warns you of intrigues to come. Talbot optioned a play titled “The Smell of Burning Leaves” that turned out to be a huge success – and promises to be a game-changer for the fortunes of YSK, but there are signs that the deal may not be going in his favor.

When not on the set, he returns to a flat in Primrose Hill that he rents under a false name. “The key purpose of being Mr Eastman of Primrose Hill was not so much that the set-up allowed him to be by himself but to discover what self he was, in fact.” He isn’t comfortable with his sexuality, a forbidding path to explore in 1968 England, and his attempts to channel his desires through a photography hobby will backfire on him before long.

“‘Where is Anny, by the way?’ Talbot asks as the novel opens. ‘Hair and make-up,’ says director Reggie Tipton. ‘She was late. Unfortunately.’

“‘Do we know why?’ Talbot still maintained a faint smile.

“‘No. Or at least I don’t know. She was told the pick-up time, the car was there. We called her room – she didn’t answer. We waited. She came down an hour later.’

“Reggie scoffed. ‘How can Anny Viklund be “all right”, given her history?”

Her recent starring vehicle “The Yellow Mountain” made a fortune, yet as we meet her, she “woke up wondering, as always, if this would be the day that she died.” She learns that her ex-husband, a bomb-flinging activist named Cornell Weekes, has fled a parole hearing and may be stalking her. Not surprisingly, he turns up at her hotel to beg money, a double inconvenience in that she’s trying to conceal the fact that she’s carrying on an affair with her co-star, 24-year-old matinée idol Troy Blaze.

Although all of the principals endure an often funny, usually wry series of buffetings, Reggie Tipton seems to suffer the worst as he guides actors and crew through one plausible disaster after another, even as he’s going through a self-conscious identity change that begins with a new first name of “Rodrigo.” And he’s about to cause more trouble for himself by bringing in Janet Headstone for rewrites of the “very good, very expensive script by Andrew Marvell, no less,” as his producer complains – but Reggie has other motives, of course.

And those are only the notions that set the first part of this novel in motion. Where this story proves itself to be a novel, and not a film, is in the gradual and detailed development through which each character is sent, with plot developments that draw upon the characters for their momentum. It’s a page-turner not in the typical suspense-plot way: you find yourself wondering what on earth these people can bring down upon themselves next. Resolutions are satisfying, if unexpected, and there are laugh-out-loud set pieces to enjoy en route. Boyd is a remarkably talented writer who finds both humanity and humor in any time and situation, and spins out delightful plots to prove it.

Trio
by William Boyd
Knopf
Posted by B. A. Nilsson at 3:04 PM