From the Food Vault Dept.: Albany’s Dumpling House was a revered institution during its two decades of operation, an old-school sit-down restaurant a little off the beaten path, but near enough to a Interstate exit to make it a convenient destination. Here’s a snapshot from two decades ago. The “Ron” who’s named as dining companion in the piece was actually Metroland’s founder and then-publisher, Peter Iselin.

THE STORY OF CHINESE FOOD in America, like that of most other cultures whose cuisine is here embraced, is one of evolution. To put it another way, it becomes less about Asia and more about what this country likes to eat. 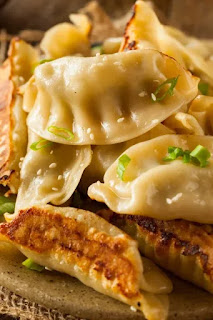 This was the basis of a backstage discussion I had recently with my friend Ron, a fellow actor in a show we’re currently rehearsing. He was lamenting the lack of the truly authentic, while I wondered if there were an authentic benchmark left anywhere in the world, so pervasive has our culinary so-called culture become.

Take the case of General Tso’s chicken. An immensely popular Chinese dish, it was born in the U.S., although it still (as far as I could determine) has a murky history. According to one source, General Tso is a historic figure who has taken on the aspect of a bogeyman – “Behave yourself, or General Tso will get you.” Another source suggests that the recipe originated in San Francisco’s Chinatown.

I once worked with a chef who studied Asian cookery and decided that you could make a reasonably authentic-seeming Chinese dish by sauteeing garlic and ginger with a dash of sherry in a wok, add meat and vegetables, season it and finish with a little cornstarch. I suspect that this philosophy was behind the creation of the Chicken of General Tso.

The dish features chicken chunks coated with a sweet sauce, stir-fried and served with broccoli. From there, you’ll find variations galore. It’s usually presented as a spicy dish, but it’s blanded down on the Chinese buffets.

It’s sweet enough to please junior palates, and thus has become my daughter’s favorite Chinese dish, and a staple of any visit to an Oriental eatery. So when I told her such a visit was due, she planned her menu in advance. “I”m going to have dumplings, and dumpling soup. And that chicken I like.”

Dumpling House sits at the north end of Everett Road, a fixture since 1987 when Henry and John Chang opened this successor to their very popular China Garden restaurant that once was Schenectady’s best.

Although it’s easy for a place to fall into the cookie-cutter sameness that characterizes most Asian restaurants in the area, Dumpling House distinguishes itself by offering fare that doesn’t rely on sugar and salt – not to mention the dreaded MSG – for its flavorings. Sauces a re typically lighter and indigenous flavors are allowed to poke through.

At this point, a little refurbishment wouldn’t hurt the place, but on the whole it’s still attractive and comfortable. There’s a large bar at which I sometimes see solitary diners tucking into their meals; the dining room is partition-divided in two, with well-spaced tables. And the menu offers few surprises but sports a nostalgic front page of exotic rum drinks (“Coconut Kiss,” “Love Potion”) and a back page of column A-column B specials.

The inner six pages list the usual array of Cantonese, Hunan and Szechuan items, with an emphasis on dumplings, of course. Not for nothing is this a signature dish – the wrapper is thin (and differently colored for different fillings) and what’s inside makes its point quickly with an eruption of flavor.

So we started with dumplings. An order of six, steamed, with a chicken filling ($4.25), for Lily, served with the expected dipping sauce. Ron, who joined us on this research mission, choose fried dumplings, pork filling ($4.50). Frying the dumplings crisps their texture while darkening the flavor.

Cold sesame noodles ($5) for me, a nice presentation (and a large portion) that included shredded cabbage and peanut sauce that was, thank goodness, miles away from the sweetened peanut butter that too often shows up on this dish.

Several soups – and many other appetizers – are offered, but my daughter stuck to her plan of having wonton soup ($1.25), which was as expected: good broth, good flavor.

We had the heat turned down on her order of General Tso’s chicken ($11), which was easily done. It had the extra features of baby corn and water chestnuts to add crunch to the texture.

My entrée was comparatively anti-climactic, although Ron continues to assure me that he thought it one of tastiest lamb dishes he’d sampled. Mongolian lamb ($12) is another Americanization; lamb is a traditional Mongolian dish, usually served roasted or boiled, but what we enjoyed was a stir-fried concoction in a spicy sauce laced with scallions, served (as were all entrées) with the usual white rice..

You can eat much more reasonably than we did; we took the opportunity to explore some corners of the menu we’ve otherwise never investigated. Service is attentive, with special requests (such as chopsticks) quickly seen to. We couldn’t finish the feast, and so packed up the leftovers for later enjoyment.

Dinner for three, with tax and tip and a glass of wine, was $91.