THERE COMES A MOMENT in each person’s life when dance-band recordings from the 1920s are discovered. It’s hard to be unmoved by them, and, while I fear that many dismiss these discs as mere platters of quaintness, those of us who get hooked on them stay hooked – and begin a lifelong quest for more. You can chase down an amazing amount of this material these days, but you’re still listening, as it were, through a sonic haze: even the best-sounding, most carefully reproduced 78s are hampered by noise and a diminished frequency range. 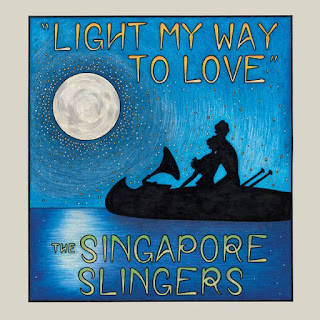 Accordion and saxophone wizard Matt Tolentino not only sought recordings and performances by contemporary groups of such vintage stuff – he also added his own voice to the proceedings. More specifically, the stunning voice of an 18-member band called The Singapore Slingers that he put together in 2008 specifically to play these ear-catching charts.

Their third CD is out, and it gives us 21 songs chosen and presented in a deft variety, but all beautifully capturing the unmistakable quality of such material. Material, by the way, that was fairly workmanlike for its day – a plenitude of stock arrangements in every dance band’s book to satisfy the relentless demands of dance emporiums. But it was an era of great innovation and social change for a populace that had no idea their music would get the one-two punch of the Great Depression and the Swing Era.

The disc opens (as do many a Slingers concert) with Walter Donaldson’s “Out of the Dawn” in a stock by Arthur Lange, whom Tolentino (in his breezy, informative liner notes) credits as one of the first such arrangers “to codify and firm up the dance band format in the early 1920s.” Arrangers were key to the texture, of course, and this disc also features four crafted by Frank Skinner, whom the Slingers saluted on their previous all-Skinner CD.

Such arrangers rarely become household names, but two that have (at least in my household) are Gordon Jenkins, whose easygoing 1934 version of “East of the Sun” foreshadows his more famous later work, such as Benny Goodman’s closing theme “Goodbye” (a Jenkins original) and his Sinatra arrangement. And then there’s Bill Challis, who practically devised the Paul Whiteman sound, which means the sound of the ‘20s. His version of “Oh, Miss Hannah” was recorded by Whiteman in 1929, with a vocal solo by Bing Crosby and trumpet solo by Bix Beiderbecke; here it’s Tolentino taking the agreeable vocal, with Matt Seppler taking the Box solo on a 1929 Conn 80A, while Tolentino recreates Frankie Trumbauer’s solo on his own 1921 Conn New Wonder C-Melody sax.

And the arrangers aren’t all from the era. David Lovrien, the Slingers’ tenor saxist, penned a chart from James Scott’s “Calliope Rag,” while Ontario-based Matt Kulbacki, a frequent Slingers contributor, gave them a bubbly “Baby,” made famous by Guy Lombardo.

Bing isn’t the only singer acknowledged here. “My Baby Just Cares for Me” (another Walter Donaldson song) was an Eddie Cantor vehicle from his 1928 Broadway hit “Whoopee!,” here given a more relaxed treatment than Cantor’s frantic performance in the 1930 film version of the play. (There’s a YouTube clip that you’re best off avoiding if you’re easily troubled by our sins of the past.) And Marlene Dietrich also gets an effective nod with Tolentino’s version of “Falling in Love Again,” a song worthy of such rescue.

Programming is always key to a collection like this, and it’s shrewdly paced so that ballads can nestle with hot numbers, and with interpolations of a rhumba (“Sidewalks of Cuba”) and even an Oriental fox-trot (“My Song of the Nile”).

Thus run the treasures on this disc. You can listen with the usual (for many) detachment and completely enjoy the sound and spirit of the songs, but as soon as you peel back the surface you fall into a wonderland of how-to-do-things-right. The charts are proven; the players are more than up to the task of not just recreating them but also giving them a welcome spark of new life. It’s not just a nostalgia trip: it’s music that deserves to endure played by musicians who believe in it. You can find this at MattTolentino.com and rivermontrecords.com.