KEEP IN MIND THAT BAYER AG (best-known as the aspirin company) remains in a legal hot-seat over its weed-killer Roundup, a product it inherited when it bought Monsanto. Although Bayer agreed to pay almost $40 million over allegations that it ran misleading ads about the product, it’s still got about 13,000 lawsuits – and nearly 43,000 plaintiffs – seeking damages over the link between glyphosate, Roundup’s active ingredient, and a form of cancer known as Hodgkin’s lymphoma. Bayer, of course, insists there’s no link.

Dr. Zach Bush disagrees. He’s a cancer researcher who tracked what he termed the explosive rise of cancer cases between 1996 and 2007, and discovered that the concentration of such cases was greatest not only where midwestern farmers were using heavy amounts of Roundup on their crops, but also in areas served by Mississippi River drainage tributaries. A map of the river and its drainage areas is a grim duplication of the cancer-cases map.

But this is only one of the several sobering issues presented in the 20-minute documentary “Farmer’s Footprint” (directed by Nicol Ragland) which was produced by Bush and can be freely viewed online. It takes a broad view of the consequences of corporate-style farming and the need for regenerative practices. As a companion piece, “Unbroken Ground,” a 25-minute documentary by Chris Malloy, looks at themes of regeneration in several fascinating contexts. Produced by Patagonia Provisions it can be viewed for free on the company’s website. We took a look at both.

Besides being a film, Farmer’s Footprint is also a coalition of doctors, farmers, and others seeking to reveal the terrible consequences of chemical farming and encourage regenerative agricultural practices. They offer consulting and other educational resources, but they’re also spreading the word with the first of what they plan to be a series of short films.

Their inaugural movie begins with about ninety worshipful seconds of rural scene-setting before we meet Grant and Dawn Breitkreutz, who own and operate Stoney Creek Farm in Minnesota, where they practice no-till row cropping and rotational grazing. They – and their farm – are the centerpiece as we learn of their journey away from conventional farming.

As Grant observes, treated seeds were one of their problems. “Ninety-nine point eight percent of corn is treated,” echoes Dawn. They moved away from chemically treated – and therefore chemically needy – seeds, and the results were quick and tremendous. Says Grant, “I’m convinced we don’t need treatment any more. Look at the earthworms – I think we’re done with that.”

Dr. Allen Williams, a founding partner of Understanding Ag, LLC & Soil Health Academy (and a sixth-generation farmer himself), helped the Stoney Creek Farm’s transformation. Dr. Williams taught at Mississippi State University for fifteen years before he realized that conventional farming methods were failing; he gave up academia and became a full-time rancher, changing his approach from continuous grazing management to an adaptive practice that renewed the health of his land. He has also been working as a consultant, teaching others how to do the same thing on their farms.

Williams explains that, as he was growing up, “at least 90 percent of what we ate came from the farm, but my education told me that we weren’t doing things right. Suddenly all of the things that we didn’t seem to need when I was growing up, like the antibiotics, and a lot of the farm chemicals, and the livestock pharmaceuticals, and the feed supplements all of a sudden became very important, and I was convinced that if we were going to keep up with times, we had to have that.” His conclusion? “Over the years, what I’ve discovered is that we were having more and more problems, not less,” adding, “All we were doing is putting band-aids on what I now understand was a gushing wound.” And, he discovered, conventional farming takes another toll: the average farmer is losing between three and four tons of topsoil annually per acre.

He notes that the quality of a farmer’s life has diminished to the point where many hate what they have to do every day – dealing with chemicals while wearing protective gear. It has become harder for them to make a living, and the need for annual operating loans keep farmers heavily in debt. “In the last year,” he says, “fifty percent plus of farmers in the U.S. are at risk of not getting their operating loans renewed.”

Regenerative farming brings a different price to pay, as Dawn Breitkreutz observes. “It’s very hard to hold a conversation with another farmer because we don’t have that much in common any more. It doesn’t bother us any more,” she concludes, “because the benefits of what we do here … far outweigh what people are saying about us. And what we’re doing is becoming slowly but surely more accepted.” 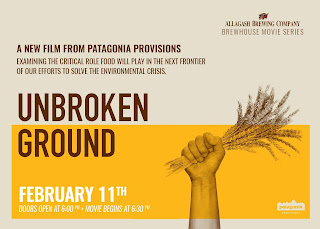 “Degraded soils mean deficient foods,” says Zach Bush. “And as America’s farmers go out of business, multinational corporations are buying up the farmlands.” He sees industrial farming as a huge enterprise, now susceptible to — and often suffering from — catastrophic failure. “It takes a mega-industry to screw up that big. Farmers are well aware that plants and livestock are interdependent with mother nature, so,” Bush concludes, “We have to look to farmers for the salvation of human health.”

Regenerative practices aren’t limited to crop and livestock farmers. Yvon Chouinard, founder of the clothing company Patagonia, learned this throughout a life spent traveling and climbing some challenging walls of stone or ice. Chouinard recently established Patagonia Provisions, that aims to make the best product, cause no unnecessary harm, and perhaps most important, inspire solutions to the environmental crisis.

“Unbroken Ground,” produced by Patagonia Provisions, is filmmaker Chris Malloy’s exploration of regenerative farming, regenerative grazing, diversified crop development, and restorative fishing. “We need a revolution in this country,” says Chouinard, “and revolutions start at the bottom.” He notes that his clothing company was an experiment, “but it’s not an experiment any more. I’ve proven to myself that it works. Now, applying that to food is another story. It’s another experiment. But it’s the most important experiment we’ve ever tried.”

Regenerative farming has been a years-long mission for Wes Jackson, founder of The Land Institute, and he’s been concentrating on grain. “Grain is 70 percent of our diet, and it’s grown on 70 percent of our acres,” he says. “The annual grain crops lead to a rapid degradation of soil, while a regenerative approach is also soil-restorative. Soil is more important than oil, and as much of a non-renewable resource.”

The Land Institute is developing perennial wheat strains, which, when successful, will eliminate those problems – and success has been realized, albeit slowly. Researchers are bringing desirable qualities together in a single species, and experimental plantings have been very successful. (And there’s a well-crafted animation in this segment of plant growth and its effect on soil, courtesy Mindbomb Studios.)

At the Cheyenne River Ranch in western South Dakota, Dan and Jill O’Brien have found a novel and entirely sensible approach to regenerative grazing. “We were being run by the chemical industry, by the feed industry,” says Dan. “What we needed were indigenous animals. We went to buffalo. They are starting and finishing buffalo on grass, which also improves the flavor of the meat. And it protects the soil. Cattle eat grass to the ground,” Dan explains, “but not buffalo.”

“We’re really grass farmers,” adds Jill. “Bison are a tool to help manage that.” They’re looking forward to future success even as they spread the word. “The chemistry, the ecology of the landscape, and the relationship with people can be reinvigorated,” says Dan. “What a spectacular opportunity!”

Brigid Meints is a graduate student at Washington State University, where she works at The Bread Lab, an on-campus research facility. “The more corporate the plant-breeding becomes, the less variety we have available to us, and the less genetic diversity,” she explains. “And that’s really scary, because we’re going to rely more and more heavily on pesticides.”

She and other students there are pursuing diversified crop development by creating crosses of plants, breeding for organic farmers. And they’re welcomed by Dave Hedlin of Hedlin Family Farms in Washington’s Skagit Valley. “Over 80 crops of commercial significance are grown here on about 75,000 acres,” says Dave, “due to the maritime climate and the wonderful soil. One aim, of course, is to create crops that will yield more for the farmers, but we’re also developing diversity with locally grown organic grains for craft baking, malting, brewing, and distilling.”

The documentary’s final segment looks at restorative fishing as practiced in the waters near Lummi Island in northwestern Washington state. Ian Kirouac is a partner with the fishing consortium Lummi Island Wild. As he says, “The agricultural revolution will not come through technology, but through rediscovering the old ways of doing things.”

Adds Keith Carpenter, president of Lummi Island Wild: “Salmon are our identity in the northwest. They are our buffalo. As with the fate of buffalo in centuries past, they’re in danger of disappearing – along with the even more endangered species that are too often hauled in alongside salmon. A regenerative approach is changing that.”

Catching targeted fish – and releasing non-targeted fish – is being done with an old technique called reef-net fishing. A handful of small boats works an area that’s watched by mast-perching spotters. When a school of salmon is spotted, special nets trick them into thinking they’re approaching a reef, bringing them closer to the surface. The fish are then hauled in on the nets and transferred to a live well. They’re examined as they pass, and the unwanted fish are tossed back into the ocean.

Each segment is beautifully illustrated – you’ve got nature photography at its best, helped along by the gorgeous nature of the Pacific Northwest – and the argument is sensible and convincing.

Individually, these documentaries make compelling cases for the immediate need to turn away from chemical-based farming and other destructive food-production methods. Together they present a vivid picture of hope for us and our hungry descendants.