From the Cinema Vault Dept.: This way-too-brief review hardly suited its subject, a two-and-a-half-hour masterpiece of disturbing storytelling that mixes war story with grim fable. I attended an afternoon preview of the film and emerged as shattered as I’ve ever felt by an artistic experience. I’ve since watched the movie – available on DVD – a couple of times more, but have yet to persuade my wife to watch it with me.

THE TITLE IS A TAUNT, not an invitation. Released in 1985, this two-and-half hour film was a nine-year project that follows a young man's grim struggle to survive in Nazi-occupied Byelorussia, a Soviet province that borders Poland. 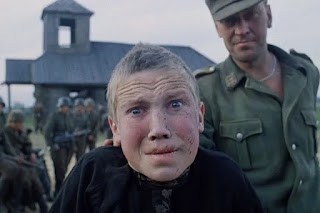 Florya (Alexei Kravchenko) is an adolescent who eagerly leaves his family to join the partisans protecting themselves from the retreating German army, revealed to us at first only as an almost-silent presence overhead in omnipresent Blohmen-Voss aircraft.

The quiet drone of those planes joins the incredibly complex soundtrack of this epic drama of the senses, as we combine with Florya in seeing and hearing the tragedy of the destruction around him.

Director Klimov, president of the Soviet Filmmakers Union, uses tight closeups and an active Steadi-Cam to lock us into the youth's point of view. There is a documentary feel to the film even as it explores the rich scope of the boy's emotions.

The subjective camera technique also heightens the suspense of the boy’s journey, which becomes, emotionally and even physically, a passage into middle-age.

All of his senses are affected, but, in keeping with the sensory elements of a movie, it is experiences of sight and sound that we share. After a too-close bomb attack, we hear only what Flori hears: insistent ringing and garble.

This movie is a lesson for contemporary filmmakers who depend on obvious gore and special effects: there is more terror in suspense and suggestion, and Klimov is relentless with it.

“All the trouble starts with kids,” one of the Nazis declares, justifying the slaughter of a village’s children. “Your nation has no right to exist. Inferior races spread the microbe of communism.'”

The Byelorussian province has been plundered throughout history by a succession of nasty Nationalists, so many an allegory can be drawn. But the ultimate focus is on the senses – and sensibility – of a single individual. “Come and See” is a brilliant testament to an individual’s survival.

“Come and See,” in Byelorussian with English titles, will be shown at Proctor’s Theatre at 7:30 PM Friday through Tuesday, with a Saturday matinee at 3, and at 3 and 7:30 PM June 27.