YOU’VE PROBABLY CONTEMPLATED doing more shopping at your local food co-op for many reasons, among them that you’ll probably find healthier fare and you’ll be supporting the local economy. Once you finish reading John Steinman’s Grocery Story, you’ll wish never again to set foot in a supermarket. 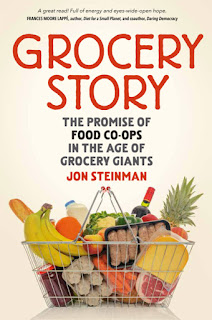 Even as the book explains in anger-inducing detail how the supermarket chains got where they are today, it gives you enough info to help you realize how thoroughly such stores manipulate pricing structures, shelf placement, and, ultimately, you, the captive shopper.

Steinman is a food journalist who produced “Deconstructing Dinner,” a six-episode TV series, in 2013, and a syndicated one-hour radio show produced from 2006 to 2010, originating in Steinman’s home town of Nelson, British Columbia, where the author also served as a director for several years of the Kootenay Co-op, Canada’s largest.

But the Grocery Story begins in the U.S. with the A&P, a supermarket that began in the 1850s, swelled into an impressive national chain as it reached its height in the 1930s, and sputtered to its bankrupt finish in 2015. Its history is instructive. Early in the 20th century, A&P wielded enough buying muscle that it could institute aggressive pricing practices to undercut competing stores. As Steinman reminds us, this led to A&P losing a court case because of such predatory pricing – which then paved the way for the grocery chain to developing its own manufacturing facilities. Or contracting with other companies to provide house-brand goods, often aping a well-known brand in order to capitalize on a hard-earned image while undercutting its pricing.

We follow the rise of the chains and the eventual overthrow of any antitrust regulatory muscle – but it’s a story well known to those of us who lived through the Reagan era and saw business greed quickly triumph over any measure of consumer protection.

Canada’s attitude is slightly different. That country’s Competition Bureau found Loblaw’s, its largest grocer, in violation of good practice in three areas: price competition (not only lowering its prices to beat competitors but also extracting the difference from its suppliers), non-price competition (penalizing a supplier for offering a product to a competitor without letting Loblaw’s have it as well), and margin shielding, which stuck the suppliers with the cost of any loss of projected profit. Canada’s competition regulator investigated the charges and deemed there to be  “insufficient evidence” to impose penalties.

Shoppers and suppliers both are greedily manipulated through a process called category management, which may be the most terrifying revelation of this book. This is a system by which a supermarket chain gives – or, more likely, sells – the right to manage a section of in-store display space to a particular national brand, allowing said brand to control which other brands are also displayed.

Bumble Bee Seafoods took advantage of that technique in 2015 to engage in price-fixing with its two main competitors even as all three companies shorted the amount of tuna they put in their cans.

But it’s not, as the book soon points out, just the consumer who’s getting short-changed. Even more importantly, it’s the food grower and the food manufacturer. “For every dollar spent on food,” Steinman notes, “the portion that ends up at the farm ... is at its lowest point in history: 14.8 cents.” This in contrast to the 40 cents a farmer would receive in 1950.

Steinman describes supermarkets as “living museums of the Earth’s bounty,” but, “unlike a museum, the grocery store offers little information on the history of those foods, how they were curated or the journeys they took to get there.”

To maintain an illusion of freshness, supermarket produce is chemically treated, picked while unripe, and treated some more. And it’s the chain markets that drive these procedures, with help from a toothless USDA, itself essentially regulated by the national chains. The factory farms that grow this produce undermine the soil it’s grown in through destructive practices, and the produce itself presents a weak approximation of its intended flavor.

Enter the co-op. To whatever purpose, it’s a business formed by a group of people who expect a direct benefit from it – making it a truly democratic entity. Although some manner of co-op has been part of communities for centuries, the concept truly took hold in the 19th century, as the industrial revolution changed the face of society.

In Canada, a group of dairy farmers formed over 1200 cooperative creameries in the late 19th century; similar efforts by similar forces were underway at the same time in the U.S. But the co-op model still used today was formalized by the Cooperative League of the USA in 1920, now operating as the National Cooperative Business Association. It drew upon the country’s labor movement, but “believed that a more people-centered America would require the efforts of laborers and consumers.” Optimistic thinking, but it didn’t take: the co-op movement viewed the labor movement as “legitimizing the capitalist economy” even as some of the co-op adherents longed for capitalism’s end.

After World War II, 2.5 million people in the U.S. became members of retail co-ops even as the CLUSA shifted its goal: “the movement would set its sights on challenging the monopolies and would do so as a sector co-existing within a capitalist economy.”

The 1960s and ’70s saw the most significant swell of co-op development, with outlets at times in unlikely locations. “The Buffalo Mountain Food Co-op in Hardwick, Vermont,” for example, “shared a roof with a gun shop and a liquor store. ‘Under one roof you could purchase a pistol, a pint of Jim Beam, and a pound of tofu,’ says founding member Annie Gaillard.” To support this retail efflorescence, a number of co-op food distribution networks also emerged.

Philosophical problems became more obvious in the early ’80s. “Many co-ops had already grown into successful businesses with managers and boards of directors, while others had retained strong opposition to any formalized structures that resembled capitalism. Paradoxically, the non-model approach to cooperation was seen by many as anti-democratic compared to the more formalized models of intentional planning, delegation, and consenting of decisions. The participatory management approach resulted in meetings dragging on ‘interminably’ with ‘nothing seeming to be settled.’”

Thus the decade became a period of evolution. Co-ops needed “to balance the ethics and values of their members with the realities of running a business.” Not surprisingly, the supermarket chains fought back. They branded food co-ops as “un-American, subversive, and communistic.” They conducted price wars. They spread the canard that co-op prices are always higher.

While there’s always a premium on organic produce and quality meat, co-op pricing was otherwise “remarkably low, thanks to the energy and effort of volunteers who carried out tasks that would otherwise have been performed by paid labor.” Many also held on to their participatory models, requiring – or at least suggesting – that members should work, and offering discounts to those who did so. But it remains a fact that co-ops “have shrunk the distance from farm to plate unlike any other grocers, and their sourcing of more ecologically minded food has led the grocery retail industry.”

Food co-ops typically offer more than food. They become social centers. They become education centers, offering classes on cooking and, often, much more. “At the Brattleboro Food Co-op, some of their educational offerings extend beyond the store and into local schools, hospitals, and museums.” And the co-ops often offer store-cooked meals using the high-quality ingredients they keep on hand.

Steinman makes the important point that food co-ops offer the best remediation of the food desert phenomenon – the problem created by chain supermarkets who close “underperforming” – but not necessarily unprofitable – stores in inner-city and rural locations, leaving low-income neighborhoods only convenience shops as nearby food sources. There have been any number of eager co-op start-ups to combat this problem, but, even at a distance, the supermarket model, “built on razor-thin margins and cutthroat competition,” perpetuates a negative image of co-ops. “But with 75 percent of start-ups making it, the odds of success are in food co-ops’ favor.”

With all of the personal benefit out of the way, Grocery Story finishes with a look at the economic impact food co-ops have on the community and a community’s farmers and other food-makers. This may be the starkest of all the contrasts between co-ops and chains, and it’s the one the chains continue to fight with lies and misinformation.

Every page of this book is filled with stories and statistics that shore up Steinman’s arguments, and the mixed-success of the co-op model doesn’t dim his passion. Co-ops have become dream-fueled realities, and supporting them is a simple, effective way of improving the health of the body and the health of the community – thus the health of the world.