Blowin’ up a Storm

MOSAIC RECORDS HAS BEEN VERY GENEROUS with its Woody Herman reissues, and for an excellent reason: Herman’s jazz bands (and there were many) were among the most exciting and innovative in the business. Why they’re not mentioned in the same breaths as the bands of Ellington, Goodman, Shaw, and the like, is puzzling. Herman had no shortage of hits during the big bands’ heyday. Perhaps his constantly mutating image worked against him. 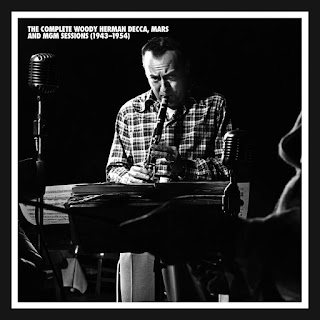 Perhaps it’s the partisan nature of his current fanbase. Many jazz commentators are fond of picking this or that period of the Herman realm and disparaging the rest, but Herman’s lapses, such as they may be, occurred on an individual basis. He recorded any number of second-rate songs (who in the business didn’t?), and there were some questionable choices of session personnel when Woody had to pay the bills. But all of his bands, or herds, or whatever you wish to call them, gave off sparks – the result of Herman’s ability, again and again, to pick great performers and arrangers.

The new Mosaic release, “The Compete Woody Herman Decca, Mars, and MGM Sessions (1943-1954),” fills in the gaps created by two earlier (spectacular) Mosaic boxes. “The Complete Capitol Recordings of Woody Herman” is a six-CD collection that ranges from the end of 1948 to ’50, and from 1954 to ’56, which whetted the fans’ appetite for the release that followed: “The Complete Columbia Recordings of Woody Herman and His Orchestra & Woodchoppers (1945-1947).”

These two sets (and a fillip of Phillips recordings from 1963 and ’64, collected in a three-disc Mosaic Select set) could be considered all the Woody Herman you really need, unless, of course, you’re a true jazz fan, which means you’re a true Woody Herman fan. Not necessarily a completist – that would be a significant challenge. But one wishing to celebrate this leader and his many bands from just after his start in 1943 until well into the ’50s, at which point the bands – all jazz bands – fell victim to drastic changes wrought by post-war economics and a boom in broadcast media that more than ever leveled the playing field of popular taste.

What’s astonishing is that Herman was able to turn out recordings with such consistent rewards given the changes he had to deal with. Most significant for a jazz musician was the shift to bebop, something Herman embraced, playing Dizzy Gillespie arrangements and welcoming Charlie Parker to the bandstand whenever their paths and schedules allowed.

But let’s take this back to beginning. Woody Herman played vaudeville as a youngster, dancing and singing even as he sharpened his chops on sax and clarinet. He put those skills – including singing and dancing – to use during stints with local and territory bands, and when he joined the prestigious Isham Jones orchestra he was also called upon for those talents. Jones had written enough song hits to allow him to retire young, and in 1936 he turned the band over to its members, where Woody was chosen leader and the outfit took on the rather unwieldy name of “The Band That Plays the Blues.”

They debuted just as the big-band phenomenon burst forth and made number of recordings for Decca, including hits like “Woodchopper’s Ball” and “Blue Flame,” which would thereafter be associated with Herman. This band was a co-operative venture, a structure that Woody found restrictive. That, combined with the effects of wartime and the threat of a recording ban by the Musicians’ Union president, combined to push Herman to re-structure his outfit as an entity under his own control. And that’s where the new Mosaic set comes in.

It opens with a Decca session recorded in November 1943, right after the label signed a revised deal with the union (and before RCA and Columbia signed). He’s got five trumpets, three trombones, and seven reeds – but that’s Ben Webster on tenor, and when you hear him solo on “Basie’s Basement,” followed by Woody’s easygoing clarinet, you feel the Ellington kinship that was so much of the Herman identity. And dig the underrated Hy White’s electric guitar.

Speaking of underrated (and Ellington), Herman was a terrific singer who could have built a career on that talent alone, but his rendition of “Do Nothin’ till You Hear from Me” is extra-good. The other vocal spots are taken by Frances Wayne, who, you’ll hear, had an effortless way with a ballad both in vocal quality and interpretive style. She would sing with Herman’s band for the next two years, and redeemed many a mediocre, chart-seeking number.

Significant changes marked the band’s journey through 1944, including the arrival of pianist-arranger Ralph Burns, who would shape the First Herd identity, along with drummer Dave Tough, tenor-sax wizard Flip Phillips, and trumpeter-arranger Neal Hefti. Nice to see some of the notable transients as well, including Ellingtonians Juan Tizol and Ray Nance.

But just as this band was jelling, Herman switched labels and went to Columbia. Ideally, this means you need only pull the earlier Mosaic set off the shelf to enjoy the band’s spirited sound and further innovations, including the adoption of bebop tropes.

We return to the new set for a significant date: Herman’s March 25, 1946 Carnegie Hall concert, where Stravinsky’s “Ebony Concerto” was introduced (but only a fraction of which survives, possibly a measure of the hostility it provoked among audience and performers alike). Otherwise, the concert is an impressively varied affair, sometimes rambunctious, often laying back in a pulsing groove.

“Blowin’ up a Storm” is nearly two minutes longer than commercial recording made four months earlier, looser and more exciting, with a tremendous solo by underrated trombonist Bill Harris and a lovely moment (off-mic though it is) with Red Norvo’s vibes. (Listen also for Harris’s sublime work in “Mean to Me.”) The three-movement “Summer Sequence” featured its composer, Ralph Burns, at the piano, leading the band through a succession of thematically linked moods. Woody sings a sincere “I’ll Get By,” Norvo burns it in “Red Top,” and Flip Phillips finishes the event with a poignant original, “With Someone New.”

Like Benny Goodman, Herman kept the acetates of his Carnegie Hall concert in a closet, where a visiting friend spotted them and suggested that, like Goodman, he get them into print. But this was in 1952, which is why they ended up on the MGM label, which wasn’t quite as celebratory as Columbia had been for Goodman. 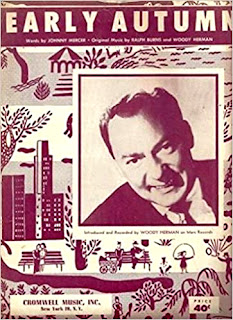 A lot of Herman history goes by now. As of 1946, he was still recording for Columbia. He disbanded his band at the end of the year, but resumed recording the following October. What would come to be known as his Second Herd jumped to Capitol Records at the end of 1948 (also the end of another damn recording ban), and he recorded for that label through 1950, although sometimes in different guises, such as “Chuck Thomas and His Dixieland Band.”

Mosaic’s Capitol set picks up again in 1954, but now we know where Woody had been: he signed with the MGM label. It must have seemed like a good idea at the time, although he was promptly thrown into the studio with Billy Eckstine for four sides that are nice Eckstine numbers, but not much of a showcase for the thrown-together Herman band. But we hear the new band settling into shape on the following session, from January 9, 1951, where Shorty Rogers, Urbie Green, Red Mitchell, and Dave McKenna are among the sidemen. More Ralph Burns arrangements liven the recordings, which again are a mix of standards, novelties, originals, and, this being MGM, movie-property songs.

Listen to “Prelude to a Kiss” from the June 18, 1951, session and you hear Woody on alto paying wonderful tribute to Johnny Hodges. From the same session is the lively “New Golden Wedding,” Ralph Burns’s serves-it-right reworking of Jean Gabriel-Marie’s 1887 salon piece “La Cinquantaine,” the scourge of all beginning cellists. There was a closer affinity with classical music back then: listen for the use of Debussy in the otherwise workaday pop song “Lonesome Gal” and Ferde Grofé’s “On the Trail” in “Perdido.” And, though I’m not sure this counts as a classical quote, “By George” incorporates a riff from Henry Fillmore’s “Lassus Trombone.”

A two-tune session with David Rose’s easy-listening orchestra appears in the midst of the MGM era, with Woody’s alto sweetening “Harlem Nocturne” and Rose’s “Nostalgia.” And why not? Nobody faulted Bobby Hackett for doing such things.

In mid-1952, Herman decided, wisely, to ease away from MGM and, not-so-wisely, co-start his own label, Mars. (He wasn’t a great businessman, to say the least.) We have Woody Herman and the New Third Herd waxing terrific versions of Ralph Burns-arranged songs like “Stompin’ at the Savoy,” “Early Autumn,” “Moten Stomp,” and “Singin’ in the Rain.” The band is experimenting with crunchier harmonies and more creative rhythms, even going calypso with Blind Blake’s “Jump in the Line.”

By the end of the brief Mars era, the seams were showing. Although the band could put down an excellent number like Burns’s “Beau Jazz,” there also misfires like Burns’s “Love’s a Dog.” And their 1954 recording of the Ray Charles song “Mess Around” is a waste of the session talent. But the set ends on a high note, with a trio of live tracks from a performance in Omaha. “Indian Summer,” “Tenderly,” and “Star Dust” remind us why the standards needed the big bands – and the finish, featuring a glorious Al Cohn arrangement and Woody’s alto sax, is sublime.

As expected, the seven-disc set features some fascinating alternate takes and even a couple of rehearsal excerpts, all of it mastered with the meticulous care for which Mosaic is renowned.  “Any era of a bandleader’s work should be dealt with on its own terms,” concludes Jeffrey Sultanof in his excellent notes to the set. “No, this ensemble is not the First or Second Herd, but many recordings presented here reward repeated listening and continued discussion.”

As with all Mosaic issues, it’s a limited-edition set. The other Woody Herman sets have long since sold out, so you’ll do best to grab this one now.

Thanks for the catch! I have corrected the text and done penance with a cat o' nine piano strings.