LISTENING TO ERNIE KOVACS is a reminder that he was a storyteller above all, more grounded, perhaps, than Brother Theodore, but with a more subversive edge than Jean Shepherd. Which made Kovacs ideal for the dying medium of radio, the place where he began. The fact that he discovered television meant that he was able to apply his restless imagination to the black-and-white screen, and therefore transform the industry. 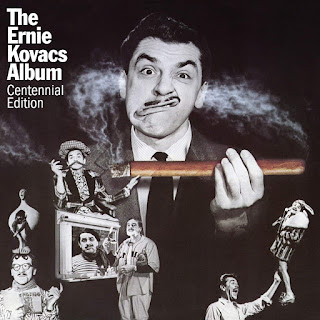 Kovacs fans know all about this, and this year, the centenary of his birth, we’re (as always) delighted to show the less-enlightened where just about everything we prize about all TV comedy originated: the mind of Ernie Kovacs.

We have some more help now in the form of the voice (or, more accurately, the sound) of Ernie Kovacs. It graced an LP issued in 1976, and has been expanded into a CD reissue with a half-dozen bonus tracks.

You get a taste of his lunacy right from the start, as “Tom Swift” puts the adverb-rich boy inventor into perilous captivity – in the tuna-salad slot of an abandoned automat, to be precise. Other sketches lance his favorite target, TV conventions, making fun of commercials, interview shows (“Welcome Transients” features a guest with a compelling story to tell who is unable to remember its key points), sentimental stories, newscasts, and, of course, a generous helping of the poetry of Percy Dovetonsils (“Ode to Stanley’s Pussycat” and “Happy Birthday to a Bookworm,” among others) recited over a shrill wordless background chorus.

How spontaneous were some of his stream-of-consciousness-sounding bits? Although some of his TV scripts had segments noting only that “Ernie talks for ten minutes,” this CD includes two routines that also appeared in MAD magazine, to which he was a contributor in its early days. “Droongo” (called “Gringo” in the magazine, and sporting a delightful Bill Elder portrait of Kovacs) is a board game with dismayingly complicated components and rules. Here he’s reading it to a kids-rich studio audience, and the kids are loving it. And Ernie delivered his nonsense with the aplomb of a Ben Grauer and Bob Hope’s punchline skill.

“Strangely Believe Its” mocks the “Believe It or Not” collections of untoward trivia, while “Pierre Ragout” is a French-accented telling of the Snow White fable, populated by dwarves named Doc, Sneezy, Happy, Grumpy, Patty, LaVerne, and Maxene (although the last three names change throughout the saga).

Three of the bonus tracks are drawn from Kovacs’s 1955 radio shows, including an ad for “Hot Nudniks,” a relentless breakfast cereal, and there are even a couple of songs. Kovacs’s wife, Edie Adams, usually covered the vocal department, but Ernie was very fond of Frank Loesser’s song “The Inch Worm,” and we have here the audio from his 1956 TV performance of the number: this alone is worth the price of the disc.

The National Comedy Center in Jamestown, NY, opened a Kovacs exhibition on August 7; there’s a coffee-table book slated to appear in 2020. But you’ve got a festival right here, good for a nostalgic re-visit to Kovacs-land (as biographer Diana Rico termed it) or, if he’s new to you, a delightful discovery. As Kovacs himself said at the end of the song, “It’s a real nice thing.”
Posted by B. A. Nilsson at 11:29 PM