Cats as Cats Can

From the Vault Dept.: Sometimes a book showed up on an editor’s desk that was unusual enough (the book, that is, not the desk) to merit outsourcing to a reviewer unfazed by such things. In fact, what they didn’t know was that I was, am, and shall remain a devoted cat person. Sorry, pooches. Myrna Milani continues to write and has added blogging and podcasting to her activities; her website is here.

DR. MYRNA MILANI, veterinarian and author of “The Body Language and Emotion of Cats,” has added a new element to a busy schedule: endorsement of cat food. 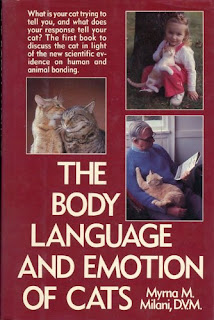 The brand name is Sheba, sold by the Kai Kan company, developed in Europe where the perception of cats is different enough to encourage the necessary research. “The European attitude accepts cats as hunters. An American looks at a cat and sees this gorgeous, graceful creature, ignoring the fact that the animal is by nature a hunter. When we see it stalking a toy, preparing to pounce, we think that's cute.

“So we don’t always understand the elements that contribute to the perception of the cat as a fussy eater. They’re susceptible to several items: sound. motion, odor, texture, and, finally, taste. What do we feed them? Something that doesn’t make noise, is still, has no odor, but has flavor and texture based entirely on what’s economical to produce.”

Not that Dr. Milani recommends an unswerving diet of anything, unless it’s rodent. “Nutritionally, the ideal food for a cat is a mouse. The two have co-evolved with this symbiosis. But nobody has really been able to pinpoint what it is about the mouse that’s so good for the cat. And keep in mind that the mouse in Los Angeles is probably eating different things than the cat in New York, causing subtle fluctuations in the co-evolutionary balance but not changing that essential relationship.”

Otherwise she recommends varying the diet. “We don’t know all there is to learn about what’s safe for them to eat, and once they’re weaned it’s entirety up to us. If you give a housecat one type of food and an allergy develops, it can be very hard to change the diet.”

Milani is based in New Hampshire but travels extensively to lecture on the subject of animal behavior. She also has written “The Body Language and Emotion of Dogs,” “The Invisible Leash and “The Weekend Dog.”

But she reports an upsurge in the amount of cats she’s been seeing professionally – part of a nationwide phenomenon that puts cats ahead of dogs in the popularity polls for the first time ever. Which Milani ascribes to the increase in apartment living and two-career households, making the independent cat the ideal choice for house pet.

“I work with the behavioral aspect of the human-animal bond. There have been more and more studies in this area of late, and we’re discovering many important things. For example, children who are raised with pets show a lot more tolerant, compassionate behavior with other people than those raised in a household with no animals.”

She also works in the field of pet-facilitated therapy, which studies the effects of animals on people in disadvantaged situations. “For instance, cats are terrific company for people who are hospitalized or in nursing homes. To have a cat sleeping nearby, purring contentedly, really enhances the quality of life for these people.

“And, when working with the antisocial – juvenile delinquents, prisoners – a first step of rehabilitation can be a rewarding relationship with an animal.”

But she most often gives advice about the day-to-day relationship you and I have with our cats, beginning in the pet shop or natal box. “People gravitate toward extremes. The kitten huddled against the back of the cage, ears flattened. pupils dilated, is very attractive to someone who feels a need to ‘save’ the animal from something. I call that the ‘St. Francis Syndrome.’ Then there is the person who chooses the animal that comes charging to the front of the cage. That’s the person who says, ‘He picked me!’

“It’s important to know what you’re getting into. By the time the cat is eight or nine months old, it may be so shy that it bites when you try to pet it or so aggressive that it attacks everyone who comes through the front door. You have no happy cat, and no happy owner.”

Often it’s most enlightening to study your cat in terms of its background as a wild animal. “Think of it in terms of the wild. A cat is territorial. And it doesn’t mind being alone. So when you get that second cat to keep the other company, you’re doing it no favor. It’s necessary to recognize normal cat behavior and make decisions based on knowledge, not raw emotion. It’s especially important not to project human behavior on an animal.”

Anthropomorphism is a subject that really brings out her ire, especially as it pertains to pet food advertising. “And the company promoting Sheba is no different than any of the others,” she says with a very human snarl. “The first time I saw it after I signed to do this promotion I was nauseated. I complained to the company, but what are they going to do? It’s a $350,000 minute.”

The idea of applying behavioral sciences to animals was stymied for a long time by the advent of computers, Milani theorizes. “The scientific community seemed to think of everything in terms of computers and decided that animals don’t think or feel but act entirely out of conditioned response.

“Only recently was the whole notion of animal thinking opened up. thanks in large part to a book by Donald Griffith titled ‘Animal Thinking’ – a risky volume for an academic to publish.” But Milani finds some of the most entertaining speculation about animal thought in the daily newspaper. “Gary Larson hits the nail on the head in ‘The Far Side.’ So many times I look at one of his cartoons and am convinced that he’s absolutely right about the way animals think.”