From the Tech Vault Dept.: Listen, my children, and you shall hear of an era with DOS to fear. That’s right: once upon a time we had no graphical interfaces on our computers (and cell phones were bulky monsters that lived in our cars). We toiled in the character-based interface of a thing called DOS, for “Disc Operating System,” which was what brought those early computers to life. (It’s still there, but well-concealed. Run “cmd” in Windows and you’ll see its enigmatic face.) WordPerfect was an early favorite for DOS-based word processing; in 1992, the company spun out a suite of companion programs, which I reviewed for the long-defunct PC/Computing magazine.

WORDPERFECT WORKS is an all-in-one package that makes a lot of sense for anyone who’s already part of the WordPerfect family. And, with such a low list price, it’s an excellent introduction if you’re thinking of joining. 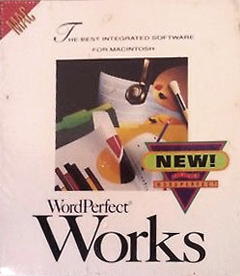 Clustered within this integrated system are modules for word processing, spreadsheet and database work, graphics editing and communications, tied together by the Shell program familiar to users of WordPerfect Office. It’s a terrific laptop bundle – it takes up 5 Mb of disk space – and may even be all you need on a desktop.

The outside world may be a little baffled by a group of applications that uses function keys so differently from everyone else: F7 (not Esc) is the exit, F3 (not F1) asks for help. But Works now even sidesteps those conventions by offering stronger-than-ever mouse support and menus.

If you know the WordPerfect line, the only unfamiliar module is Communications, and even then it’s reminiscent of MTEZ, a program bundled with many modems (both were written by MagicSoft).

At the heart of Works is LetterPerfect, a pint-sized WordPerfect spinoff initially introduced as an easy-to-use alternative to the company’s bulky flagship. Being smaller and therefore less hard-disk intensive, LetterPerfect is an ideal portable- computer tool. As a stand-alone program, it was something of an orphan; surrounded by its company in Works, it makes much more sense.

As long as you don’t mind working in WordPerfect’s proprietary vector-based mode (.WPG), you’ll have full compatibility among LetterPerfect, Spreadsheet and Graphics Editor. Import and export capabilities (also removed in the DrawPerfect migration) are relegated to an external program, GRAPHCNV.EXE, included with the package but not placed on the default Shell menu.

Database files are managed by a version of Notebook (found in the WordPerfect Office package). It’s a simple flat-file database that keeps files in WordPerfect’s secondary merge file format so that they may be used with the word processing programs. Three database models, including a handy address list, are provided, and they’re very easy to create. With a properly- configured modem you also can dial from any of these lists. 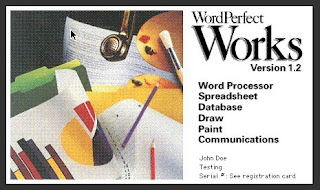 Although sporting a third-party origin, the Communications module maintains reasonable consistency with the rest of the Works package. Setup and initialization are simple, although a too-short list of modem models is offered (WordPerfect Corporation encourages you to write and ask for more). Texts from online sessions can’t directly be written to a file, which is an odd omission, but you can capture a session to the Shell clipboard and edit and save it over in LetterPerfect.

That clipboard, a handy Shell feature that uses all the memory it can find for running and swapping programs, is here pressed into even more service moving compatible information among programs. LetterPerfect will automatically format a Spreadsheet graph or Graphics Editor into a document picture, and tab-delimited information goes easily from LetterPerfect into Spreadsheet cells. With enough expanded memory available, all of the modules can be left running and swapped in and out as needed.

Other, even non-WordPerfect Corporation programs can be placed on the Shell menu, although clipboard capabilities will be limited or (more likely) disabled. No live links are maintained among the modules.

All of the Works programs have pull-down menus and mnemonic Ctrl-key shortcuts. Because of the Alt-key macros available in most of the modules, you don’t have Alt-key access to the menus – this may take some Windows-familiar fingers a while to get used to. A handy help feature allows you to invoke a feature from the same list that explains it.

If you’re upgrading from WordPerfect Executive, say goodbye to the calculator and appointment calendar; both are still maintained in WP Office. But WordPerfect should place its File Manager (found in Office) into a future version of Works – the program needs a comprehensive viewer/mover program to manage all those differently-formatted files these programs will produce.