From the Record Shelf Dept.: All right, CD shelf, but even what sounds more up-to-date is charmingly antiquated. At any rate, here’s a look back some thirty years at a pair of significant releases of music by now-forgotten American composers. 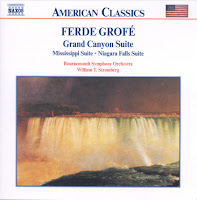 FERDE GROFÉ WROTE MUSIC in a self-consciously “American” vein, trying to achieve the same formal identity European composers were perceived as having. Victor Herbert was one of those European composers (born in Ireland, trained in Germany), but ended up in America, promoting American composers even as he continued to write his successful operettas.

“Babes in Toyland” (1903) and “The Red Mill” (1906) are about as American as you’d find on the musical stage at that time, which is to say that they’re very German even as they ape the then-popular French operettas that were so successful in England. The nicely recorded Naxos CD offers two suites, proving how thoroughly Herbert’s catchy tunes insinuated themselves into the musical language. We know them as folk tunes, and when “March of the Toys” wraps up the “Toyland” suite, we’re comfortably back in a childhood state of mind. 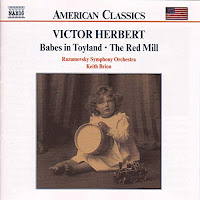 Grofé, some 30 years Herbert’s junior, grew up with these tunes–his maternal grandfather worked with Herbert–and added the influence of jazz. He joined Paul Whiteman’s orchestra in 1917 as a pianist and arranger, and Whiteman’s group premiered many of Grofé’s own compositions (he also orchestrated Gershwin’s “Rhapsody in Blue”). The “Grand Canyon Suite” has become Grofé’s most enduring work. It’s well rendered here, corny “On the Trail” movement and all.

But that’s not to overlook his evocative “Mississippi Suite” from 1926, which carries us through the heartland of America and ends up at a Mardi Gras celebration in New Orleans. The orchestra is spared no pomposity, but the work grows on you. “Niagara Falls Suite” was commissioned by the New York State Power Authority, and Grofé conducted its first performance in 1961 with the Buffalo Philharmonic. The musical language is denser and more complex, but the effects are every bit as startling and evocative as in his other works. Conductor William Stromberg has been featured in a number of Naxos film score releases, and proves himself just as able with these scores; likewise, Sousa specialist Keith Brion’s conducting shines on the Herbert CD. Both deserve Naxos’s “American Classics” designation.