LEGENDARY MEZZO-SOPRANO CATHY BERBERIAN developed a program in the early 1970s that presented a song recital as it might have been performed in 1909. She dressed accordingly and sang numbers ranging from “The Song of the Flea” to “Father’s a Drunkard and Mother Is Dead.” It was recorded at the 1973 Edinburgh Festival, so you can hear (if you can find the LP) the twinkle in her voice as she sails from one song to the next. It’s a wonderful conceit, but, without being too sardonically self-conscious, it’s as rooted in the 70s as it is in the aughts. 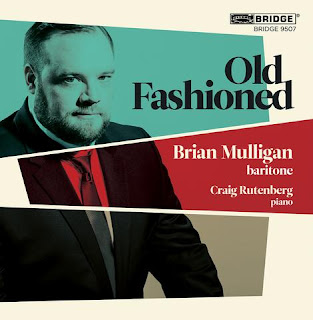 There are delightful chestnuts from the early 20th century, but they typically display an intensity of sentiment that we’ve long been too hip to indulge. Thus, when you do find performances of “On the Road to Mandalay” or “Trees,” the singer finds a way to telegraph this emotional detachment – usually through some manner of camp or other exaggeration.

This was not the case when John Charles Thomas sang these songs, or John McCormack, or Leonard Warren. And it was Warren’s work that inspired baritone Brian Mulligan not only to develop his own splendid operatic voice, but also to record a collection of 21 songs written between 1877 and 1939 – and to record them with nothing but the total conviction the material deserves.

“Old Fashioned” collects a variety of moods in a variety of styles and tempos, each lyric lovingly explored by Mulligan’s glorious voice. Thus, the disc’s opener, Guy d’Harledot’s “Because,” does not recall the tremulous Crosby and Como versions: it’s from the full-throated Mario Lanza school, yet without the added emotion Lanza managed to pack into the piece. The Edward Teschemacher lyric communicates what you need to know along a most appropriate musical path, and this is what Mulligan honors. You’ll be moved without the need for added stylistic persuasion.

The songs herein reflect a long heritage of other performers, all of them honored by the mere fact that Mulligan makes each of these songs his own. Thus, “Bluebird of Happiness” may remind you that Jan Peerce adored this song, and “Goin’ Home” was a Paul Robeson number; that Nelson Eddy sang “A Perfect Day” and John Charles Thomas sang “Trees”; and that “The Trail of the Lonesome Pine” is enshrined in the movie “Way Out West” as an adorable Laurel and Hardy routine. But each of these wins a robust and characteristic Mulligan approach.

This recording not only showcases an excellent voice – and Craig Rutenberg’s deft work at the piano – but also reminds us of the beauty and importance of these songs, all of them important threads in an ever-changing tapestry. “I Love You Truly” has been robustly overdone over the years – here we’re reminded why it attracted attention in the first place. And I would have been the first to cry foul had Mulligan not included Arthur Sullivan’s potboiler “The Lost Chord” (the oldest song in this collection), which has sparked so many parodies (and poor performances) – and the lyric of which tormented a character in a 1922 Booth Tarkington novel – that it deserves this unvarnished re-hearing.

And it’s not all heart-on-the-sleeve balladry. “The Green-Eyed Dragon,” an up-tempo comic song was new to me, but as Mulligan explains in his well-written liner notes, his own first exposure to the jolly piece dissuaded him from learning it, but once again a John Charles Thomas recording proved persuasive.

Mulligan’s lovely and sincere version of “When I Grow Too Old to Dream” reminded me that tenor Robert White made some terrific recordings of this kind of material – recordings now out of print. So I fear for the shelf life of this stuff. You should acquire this disc right away.