SIX YEARS AFTER HIS FATHER’S DEATH, Gary Crosby put out a book that luridly described incidents of disciplinary abuse, catapulting the unsuccessful actor-singer alongside Christina Crawford as mistreated celebrity-child of the century. And it toppled Bing Crosby from a very high pedestal indeed, because the legendary crooner had been acclaimed for decades as the ultimate father and family man. 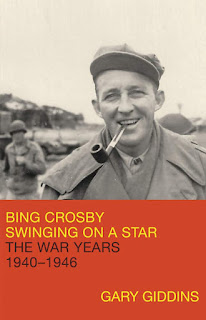 That rosy picture was due in part to the Hollywood publicity machine: once Crosby began topping the ranks of popular screen actors, accounts of his family life were splashed across the newspapers and magazines, helped in no small part by the upstanding characters he typically portrayed. But there’s something in the American psyche that enjoys seeing its heroes dethroned. When I’ve mentioned to friends that I’m reading Gary Giddins’s new volume of Bing biography, the too-frequent response has been, “That Crosby was a terrible person.”

This is the second of what’s projected to be a three-volume set, covering the busy years 1940-46. Like the first volume, it wasn’t authorized by the singer’s estate, but it received a huge boost of info after Crosby’s widow read volume one and was impressed enough to share papers and other memorabilia.

Although the book is thus informed with great detail, the narrative is never swamped by it. Giddins is a scholar who avoids growing didactic; he’s a storyteller who (like his subject) knows how to make a punchline land. He provides a comforting amount of historical and cultural context for the Crosby story to make sense, yet he assumes that the reader possesses a mature knowledge of entertainment history (you should know, for example, who Larry Adler was).

The portrait that emerges from the book’s nearly 600 pages is that of a private man who became a public figure. By 1940, he was a movie star – “Road to Singapore” was the box-office champ – and a radio fixture. He was taking care of family members like his brothers Larry, who served as publicist, and Everett, his manager; and he’d commissioned a large North Hollywood house for his wife and growing family.

Bing Crosby was a complicated, many-faceted man who achieved a phenomenal level of success because he seemed so accessible and easygoing, and sang in a manner to match. And he came along at a time when technology allowed us to listen to him week after week, a comforting presence that landed via radio in our living rooms. It’s a mark of this book’s success that Crosby’s fame is celebrated even as his variegated nature comes through. And the first question you’re asking (if you’re one of the abovementioned friends) is, Was he as horrible a father as Gary described.

The easy answer is: No. Or at least not yet. We’re in the early years of Bing’s fatherhood, with a quartet of boys on hand ranging in age from two to seven, thus easing the older ones into the beginnings of teenhood. Although this part of the story takes up a comparatively small portion of the book, it’s poised to draw the most scrutiny from the rubbernecking public. You’ll learn that both Bing and his wife, Dixie, the boys’ mother, passed along severe disciplinary practices they themselves experienced while growing up. Which doesn’t condone such practices, but at least contextualizes them.

And it’s difficult in this hand-wringing era to remember that what was acceptable practice throughout history can look very different today. Bing appeared in blackface in two of his movies: the impossible-to-find “Dixie” and the impossible-to-ignore “Holiday Inn,” both wartime productions. Crosby was very attached to bygone showbiz traditions, frequently spotlighting old songs and giving work to older actors. “Dixie” purports to tell the story of Dan Emmett, whose Virginia Minstrels was, in 1843, the first company to perform in blackface. The movie is worth seeking if only to goggle at the plot point – a true facepalm moment – that explains the reason for the burnt cork.

What’s missing, from our vantage, is the contemporaneous picture that Giddins presents, noting that the general acceptance of minstrelsy was “too wide to generate criticism, never mind indignation. Between 1940 and 1946, Hollywood released more than sixty features and short films with at least one blackface routine, either a full-dress minstrel number or a mistaken-identity bit.” And, he adds, “its popularity peaked after the way, when the return of eight million troops influenced the national taste.”

We get the fascinating story of the genesis of “Going My Way,” the film that writer-director Leo McCarey pushed through a very resistant studio, alongside the several other pictures Crosby made throughout the war. He recorded prolifically for Decca, even if, as Giddins keenly observes, some of the material was execrable and he wasn’t always at his best. Although Bing resisted being tied to a weekly radio schedule (and soon would underwrite a major technology change), he preferred that medium to the others, and the many surviving airchecks show him to be a relaxed, amusing presence – a perfect radio-room guest with the tensions of war all around.

Crosby threw himself into entertaining and raising money around the country for the war effort, often involving celebrity golf matches, which was another realm in which he thrived. But when he made his first overseas visit to the troops in 1944, a very different personality emerges. A fascinating sixty pages of the book chronicle his travels, a grueling schedule of rough passages through war zones with performances given wherever a makeshift stage could be assembled – often on the back of a truck and sometimes in the pouring rain.

These performances, usually with a comedian (Joe DeRita was a mainstay) and a girl singer (Dinah Shore joined him from time to time), have been credited as among the greatest morale-boosters for the homesick troops, who often couldn’t believe that Bing Crosby was among them, singing his heart out – modest, approachable, and without his hairpiece, which he thought was too pretentious for the circumstance.

He was generous with the armed forces, generous with his fans – he tried to answer every letter he received – and generous with friends, some of whom he secretly supported financially. We see his marriage continue to fail as Dixie’s alcoholism takes its toll and his retreat, alone, into his leisure activities of golf and horseracing. Eventually he took up with ingenue Joan Caulfield, who appeared in four of his films, including “Blue Skies.”

An affair wouldn’t sit well with his publicity or public, so he managed a great deal of discretion in spending time with Caulfield. But he was being stalked at that time, and this part of the biography finishes with the help of a pair of sisters, Mary and Violet Barsa, who lived in New York’s Westchester County and had the money, leisure, and devotion to follow Bing whenever he hit New York. He actually befriended the girls, who became lifelong Christmas-card recipients, and Giddins offers diary passages that give a unique view of a celebrity. As when he stopped to chat with them on a Manhattan sidewalk early in 1946. As Mary Barsa wrote:


“Does it bother you when we follow you around?”
“Oh no, you never bother me. It’s those autograph hounds that bother me. There’s one boy who stood at the door of the hotel and I swear he had gotten 35 autographs already. I don’t know what they do with them. I think they trade in 35 of mine for one of Sinatra’s. Don’t you think that’s what they do? (Laughs.)”

Crosby then escorts the young ladies to a nearby Howard Johnson’s and orders hot dogs and hot chocolates for them all.

There’s some thirty years of Crosby's life left to cover so, while I appreciate and admire Giddins’s thoroughness with this book, I hope he picks up the pace a little – I’m eager to get my hands on volume three. I already know the outline of the story, which includes another marriage, a broadening of his movie roles, a number of television appearances, and a final stage tour that included a stop in December 1976 at Broadway’s Uris Theatre, where I saw him perform. I felt then that I’d stepped into a special, timeless world; this excellent book inspires a similar feeling.