Look at the Record

I FINALLY GOT AROUND to digitizing those remaining records that seemed worth having and which lacked affordable (or any) CD replacement. Not surprisingly, it was a painstaking process, often calling for cleaning, the static electricity from which then invites more crud and more cleaning. Then there was the jacket to contend with. I’m sentimental about those jackets: they provided my earliest music education, but they’re too large for a single pass through my scanner. Each face needed four, and subsequent stitching. The box sets with booklets were especially challenging, as I’m fussy enough to want a nice PDF file alongside the MP3s. 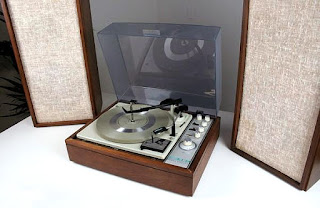 At its peak, my record collection topped out at about 1,000. I was quick to replace favorites as they appeared on CD, which often was a mistake – those early CDs didn’t always do justice to the recordings, and were re-mastered and issued again. Between that and a heartbreaking day during which I culled records I knew I’d never want to hear again, I whittled it down to about 600. Reissues grew cheaper and more expansive. CD box sets of the Heifetz, Toscanini, Munch, Horowitz, Reiner, Gould, and others made significant dents in my record holdings. I had to forego a complete Arthur Rubinstein when the set first appeared in all its costly glory, but it returned in a pared-down, cardboard-jacketed set that killed another two dozen records.

I suppose I should have counted, but I’m stuck with guessing that I digitized about 200 of what was left. Some records brought back pleasant memories, such as the recollection of a cat that would freak out during the last movement of a Montsalvatge piano concerto, and the joy of discovering the consistent wit of the post-Bonzo Neil Innes. Some seemed like wasted efforts: Did I really need a scratchy piano recital by onetime Heifetz accompanist Emanuel Bay? (Pronounced “bye,” by the way.) I even gave up once, in the middle of transferring an LP of J.R.R. Tolkien reading and singing his poetry, which was dreadfully performed and even more dreadfully recorded.

What a pleasure finally to be rid of these things. I grew up with records, and was able to appreciate their audio superiority by comparing them to the 78s my father still had lying around. Although I welcomed the arrival of cassette tapes, they were for car trips, where the engine noise covered some of the hiss. What I hated about my records was their short lifespan, at least as a far as clean sound was concerned. It seemed that a fiend with jelly-smirched fingers snuck in and handled the platters when I was away, because pops and crackles set in after only a playing or two. And the scratches were so pernicious that I learned to associate them with particular moments: even this far in the CD era, I still anticipate the nasty clicks that percussed the slow movement of the Brahms Violin Concerto.

So I was delighted to welcome digital. Sure, I heard the whinings of those who insisted vinyl sounded better, but never heard the proof. Perhaps my ears have been blessed with their own A-to-D converters. In any event, I was overjoyed to be rid of the last of that collection.

And then, as I was about to pitch what remained, my daughter came home during a college winter recess and asked if I had a record player. She was into vinyl now. As it happened, I did. My own high school-era rig was in the attic. We schlepped it down and fired it up and it made some reasonable noises. It was a KLH Model 20, a console with a Garrard turntable and FM tuner perched over the amplifier below, housed in a handsome wood-and-smoked-lucite case, with a pair of great-sounding bookshelf speakers. I replaced the phono cartridge and turntable drive-wheel belt and it sounded even better.

My daughter and I cherry-picked through the records to give her a core of about 100. Her musical taste and mine overlap substantially enough to send plenty of good stuff her way, and I’m thus treated to the same phenomenon my parents endured: hearing music blasted through a bedroom doorway. The delightful, annoying, very appropriate irony is that it’s the same music, from the same records, played on the same turntable and issuing from the same speakers. Which turns out to be kind of delightful, but don’t tell her that.
Posted by B. A. Nilsson at 9:30 PM