BY THE TIME Stanley Kubrick’s “2001: A Space Odyssey” was released, we were but one year shy of Neil Armstrong’s moon walk. Even as Cold War logistics hurried NASA’s space program, with its seemingly unlimited funding, Kubrick’s dream of a “proverbial ‘really good’ science fiction movie” took shape first in offices (and an abandoned bra factory) in Manhattan and then at MGM’s British Studios in Borehamwood, a few miles north of London from 1964 to 1968, going wildly over budget in the process. 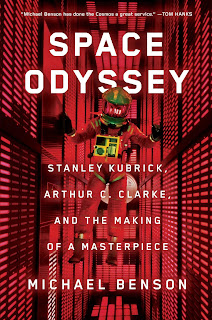 In the wake of the movie’s disastrous premiere, its success skyrocketed and its innovations were rightly hailed as groundbreaking – and it’s been the subject of a slew of books. But none has explored the movie’s genesis as thoroughly as Michael Benson’s Space Odyssey, which has mined what’s already been written and added much, much more.

Kubrick already had the acclaimed movies “Paths of Glory,” “Spartacus,” and “Lolita” behind him, and “Dr. Strangelove,” his most recent, was a runaway success. So he was in a position to film whatever he wanted, and he wanted to tackle science fiction. He asked his friend Artie Shaw, who had by that time had abandoned music and was working in film distribution, to recommend a writer, and Shaw mentioned Arthur C. Clarke.

Introducing the Kubrick-Clarke working relationship, Benson sets up the scenes with the description and dialogue of a novel, which makes it the more compelling, and which is justified by his general research and interviews with Clarke himself. Other key moments in the saga get a similar treatment, but it’s largely a scholarly trip through the creation of the movie, written with gusto and always evoking a sense of excitement as the process builds and builds.

And build it does. There never has been a filmmaker as curious and relentless as Kubrick, who demanded to know all that was humanly possible about the subject at hand – and with this subject, he was going beyond the realms of the human. There was, for example, the possibility of aliens to be encountered, and Kubrick’s first thought was to depict them in a style inspired by Giacometti sculptures. Good sense prevailed, of course, and we were left with the mysterious monolith – but the pathway to what would prove to be the movie’s key decisions were strewn with fascinating false starts and distractions.

For example, one of the most nagging problems as the Discovery scenes were being filmed was how to tip off HAL, the computer, to the suspicions of on-board astronauts Bowman and Poole. A chance remark by associate producer Victor Lyndon gave Kubrick the key – and produced one of the film’s most dramatic moments.

For all of his deserved reputation as a control freak, Kubrick was surprisingly open to suggestions. Even the tea-boy – in this case, future director-screenwriter Andrew Birkin – was able to speak up and be heard, and win for himself a far more substantial position.

The special effects in 2001 are legendary, not least because they were achieved before computer graphics, and the team Kubrick assembled was a mix of NASA veterans and up-and-comers like Doug Trumbull, who created (or improved) a succession of techniques for the movie’s amazing effects, particularly the hallucinogenic Star Gate sequence.

Just as compelling, as you read about Trumbull’s scramble to help finish the film, is the relationship that developed between director and special-effects wizard, a relationship that left Trumbull unpleasantly slighted (but which he soon forgave).

Helping propel Benson’s narrative are many fresh interviews, particularly with Dan Richter, who devised and choreographed the opening sequences while playing the lead man-ape, and Christiane Kubrick, the director’s widow, who takes us inside her husband’s thoughts at critical junctures.

I first saw this movie late in 1968, when it made its way to a Connecticut theater, and, even as a bright twelve-year-old, I wasn’t prepared to be so baffled. No movie had ever treated me like that before, and I was furious. I found a copy of Clarke’s novel (the genesis of which is one of the most suspenseful threads in Space Odyssey), with its more easygoing interpretation of the story, and attended the movie again. And again.

Jerome Agel’s The Making of Kubrick’s 2001 appeared a couple of years later, collecting reviews and photos and quotes and anecdotes into a paperback that squinched the content onto small, poorly printed pages, but it further helped me contextualize the film’s technical aspects – I hadn’t seen a sci-fi movie before – and appreciate its revolutionary quality. Each subsequent Kubrick film inspired its own hoopla of derision and worship, but 2001 remained unique in the research and speculation it continued to inspire.

The movie won some renewed attention as we approached the year of the title, and Piers Bizony’s 2001: Filming the Future was published at that time, giving a more thorough look at the making-of than had appeared before. Bizony greatly expanded that manuscript for the lavish Taschen book The Making of Stanley Kubrick’s 2001: A Space Odyssey, which packed its detailed text and wealth of illustrations into a monolith-shaped brick that almost makes up in design audacity for the awkwardness of trying to read it. But I won’t short-change it on that account: until Benson’s book, it was the definitive source of background info.

With the movie’s 50th anniversary upon us, it’s been released to home video again, this time in a 4K transfer. You should watch it – or whatever version you own (you do own a version, I trust) and then read Space Odyssey. You’ll never see the movie the same way again – but, then again, you never do.

Space Odyssey
by Michael Benson
Simon & Schuster
Posted by B. A. Nilsson at 1:10 PM