OUR EARS HAVE GROWN ACCUSTOMED TO a range of rhythm and harmony that probably would baffle or even antagonize someone living a couple of centuries ago. By the same token, the music that pleased that long-ago listener isn’t going to grab us with the intensity it had at its birth. Not only are we pummeled with plangent sounds but we’ve also been background-musicked to a point where it’s easy for most tunes to seem to disappear. 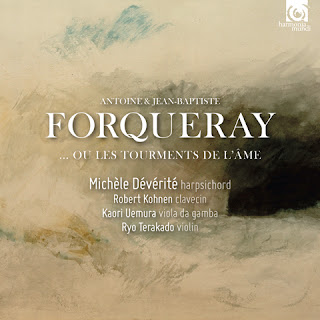 Can you send yourself, as a listener, back to an earlier time? This could mean, if your destination is the 18th century, eliminating things like automobiles and the landscape that goes with them. Which also means that the notion of time itself is different. Travel takes days, not hours. Communication is conducted in person or by slow correspondence. Life is hometown-centered.  Life is slower. Listening is different.

With a casual auditing, the music of Antoine and Jean-Baptiste Forqueray can slip into the background. There’s a sameness to the pieces, especially when taken over the course of a new four-CD set of their complete works. Listening with 18th-century ears, however, reveals the richness of the pieces, which turn out to be complex and varied. And, according to the composers’ contemporaries, difficult to play.

But not difficult for harpsichordist Michèle Dévérité, who performs the bulk of the Forqueray suites as solos, bringing in a small Baroque ensemble for a few of the selections. She’s working with the arrangements that Jean-Baptiste made of his father Antoine’s set of five suites originally written for viol and continuo. The suites weren’t published until 1747, two years after the father’s death, in both viol-and-continuo and solo harpsichord versions, a nice tribute from a son who some two decades earlier was thrown into prison by his father for “indulging in all sorts of debauchery.”

Although music of Italy was much the rage in Baroque-era France, Forqueray’s multi-movement suites eschew the Italian sonata format in favor of a looser aggregate of dances and musical portraits, with five to seven such movements per suite. Italy gets a salute in “La Mandoline,” the second movement of the second suite, but it’s a tune that sounds a lot like the French nursery song “Ah, vous dirais-je Maman” that’s put through a series of stylish variations. (You know this song under one of its many titles; Mozart also wrote a set of variations on it.)

The third suite, which kicks off the first CD, would have been but four movements long had Jean-Baptiste not added three movements of his own, which brings other questions of authorship under scrutiny. Although father and son were acknowledged as skilled viol players, there’s no record of J-B’s keyboard skill. But his second wife, Marie Rose Dubois, was known as a harpsichord virtuoso, so it’s supposed that she may have a had a hand or two in the arrangements.

Nevertheless, those arrangements are viol-aware. Dévérité must cope, first of all, with the tessitura of the arrangements, which leave the suites in the viol’s comparatively low voice. Although we therefore rarely visit the harpsichord’s upper register, the sound isn’t muddied, even in some of the thicker-textured pieces like “La D’aubonne” from the fourth suite, for which the composer asks that the chords often be staggered between the hands, and where Dévérité tastefully realizes the arpeggios and ornamentation to work effectively in that context. Ornamentation is an art unto itself, but Forqueray’s music has plenty of decorative filigree written in. What  Dévérité adds is applied with a sparing hand and a very sure touch.

She notes that three different models of harpsichord were used for these sessions, chosen according to by-the-piece suitability. Although I don’t see a piece-by-piece breakdown of which instrument went with what piece, the choices speak for themselves in the smooth progressions of sound across these four discs.

One of  Jean-Baptiste’s added movements is titled “La Du Vaucel” (probably referring to the king’s counselor-secretary), and it’s offered in both viol and harpsichord versions, giving a very revealing contrast. It’s a moderately slow piece, marked to be played with great tenderness, but where the viol version has a halting nature (one wonders if the counselor-secretary had a limp), the harpsichord arrangement gives an accompaniment of sixteenth-note figures, and thus provokes a more fluid sense. But Dévérité is true to the nature of the piece, pacing it eccentrically enough to suggest that halting stride.

Kaori Uemura plays viola da gamba on that movement, as well as on seven other suite movements, with gambist Ricardo Rodriguez and Dévérité providing continuo. The ensemble is used to excellent effect in the last movement of the last suite, “Jupiter,” which evokes the Roman god of thunder with furious chords from the viola da gamba and fiery modulations – and which, despite the compelling effects, is mercifully shorn of most of its many repeats.

The three also perform a quartet of more youthful works by the elder Forqueray that are more typical of the era’s dance music. Dévérité studied with harpsichordist Robert Kohnen, who joins her on three works originally written for viol trio but transcribed by the duo. And violinist Ryo Terakado is featured in a number of pieces that fill out this collection, works written to honor the Forquerays.

Jean-Philippe Rameau, François Couperin, and Jacques Duphly, all contemporaneous, wrote works titled “La Forqueray,” which are included here, alongside others in which the name of the dedicatee isn’t as carefully spelled. And, bringing us back to the 21st century, two works by living composers are included: Ana Giurgiu-Bondue’s “Carillons pour Forqueray,” which captures a sense of those bells in a very Forqueray-esque staggering of the voices, and Pierre-Alain Braye-Weppe’s “Tombeau de Forqueray,” which elegantly builds its tribute like a chaconne. This is a magnificently entertaining set that rewards repeated listening. 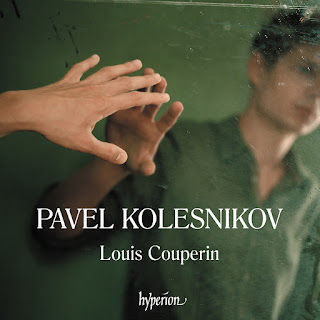 FRANÇOIS COUPERIN’S UNCLE, LOUIS, helped promote the “Tombeau” memorialization business with his “Tombeau de Mr de Blancrocher,” one of 133 harpsichord pieces known, or at least suspected to have been, written by the composer before his death at the age of 35. He missed overlapping Antoine Forqueray by a couple of years, but his influence was in the air, as you’ll hear on pianist Pavel Kolesnikov’s new collection of 22 selections. And, yes, they’re played on the piano, but it works with only a brief adjustment of the ears. Most of Couperin’s works were discovered well after his death in what’s called the Bauyn manuscript, thought to have been assembled around 1690. Couperin’s works are grouped there by style and tonality – there’s a sequence of eight sarabandes in d minor, for instance – so Kolesnikov arranges his selections into suites, much in the manner of Davitt Moroney, a scholar (and harpsichordist) and Couperin champion.

There’s no better introduction than Kolesnikov’s collection to Couperin’s emotionally charged music. Piano can be easier on unsuspecting ears than harpsichord, but Kolesnikov performs with appropriate delicacy, not trying to wrench anything unearned out of these miniatures.

The manuscript for Couperin’s fourteen preludes, grouped at the start of the Bauyn manuscript, look like something from a 20th-century experiment. They’re written in whole notes without bar lines and with arcs of flowing lines as articulation guides. Or so it’s reckoned – nobody is sure. Kolesnikov includes two of the preludes, making reasonable choices of tempo and certainly suggesting the sound of the era.

At the center of this collection is the nearly nine-minute “Tombeau de Mr de Blancrocher,” with which Couperin paid tribute to a famed lutenist who met his end by tumbling drunkenly down some stairs. Several other composers paid similar tribute, but most of those pieces were written for lute or theorbo. Couperin’s elegiac work is often appropriated by string-pluckers, but Kolesnikov caresses his chords and leans into his trills with tender deliberation and finishes with as close as a piano will ever get to sigh.

Also significant is the Pavanne that ends the disc, in the then-unusual key of f-sharp minor. It has a conversational quality as it takes its stately stroll, an effective portrait of the 18th-century sensibility.