HIS LITERARY CAREER began with a parody and soon reinvented the genre he’d mocked. But Eric Ambler first wanted to be a playwright, and had a few brushes with moderate success in 1930s London. He paid his bills writing advertising copy, and surprised himself – and his bosses – by writing copy persuasive enough inspire a run on an outmoded car headlamp that had been all but abandoned by its manufacturer. Could he turn the power of the written word into an espionage thriller?

It was a genre that included significant work by John Buchan (The Thirty-Nine Steps) and W. Somerset Maugham (Ashenden) – both later filmed by Alfred Hitchcock – but it also was clogged by routine works of reliable cliché. “It was the villains who bothered me most,” wrote Ambler in his autobiography, Here Lies. “Power-crazed or coldly sane, I no longer believed a word of them.” As for the story’s hero, “all he really needed to function ... was abysmal stupidity combined with superhuman resourcefulness and unbreakable knuckle bones.”

The parody aspect of The Dark Frontier, with which Ambler entered the genre in 1936, has itself grown as creaky as that which it lampoons; fortunately, that aspect fades as the narrative gathers speed. What remains significant about the novel is its prediction of an atomic bomb as weapon, and a mise en scène that incorporates plausible (if not downright factual) aspects of European political history. This sense of history would characterize Ambler’s next few novels, beginning with Background to Danger (Uncommon Danger in the UK), published the following year.

No parody here, but a taut, well-crafted page-turner wherein an ordinary-guy protagonist stumbles into a fraught situation. Where Dark Frontier takes place in the fictional country of Ixania, on the Romanian border, this novel dives into the peculiar state of Bessarabia in the 1930s, an area that Russia and Romania were sparring to possess. The book’s premise presents a conspiracy to incite anti-Russian sentiment in the area in order to install a Fascist government. 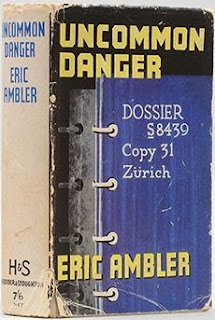 But two elements are most striking. There’s the scene that opens the story in which we’re at a board meeting of powerful businessmen, underscoring the notion that, as Ambler writes, “It was the power of Business, not the deliberations of statesmen, that shaped the destinies of nations. The Foreign Ministers of the great powers might make the actual declarations of their Governments’ policies; but it was the Big Business men, the bankers and their dependents, the arms manufacturers, the oil companies, the big industrialists, who determined what those policies should be.”

And there’s the protagonist, a journalist named Kenton, who, during a train ride to Vienna in order to borrow money from a friend, is asked by a stranger to carry a parcel through customs and deliver it to the man at a particular hotel. The fee Kenton is offered is too tempting to resist, but when he gets to the hotel, he finds his recipient dead, making him the target both of foreign agents and the police.

It’s a classic innocent-man-in-a-dangerous-mess setup, and it’s something Ambler perfected. His protagonist might be a journalist, a novelist, an engineer, an American tourist. In Epitaph for a Spy (1938), Josef Vadassy is vacationing on the Riviera before returning to Paris to his teaching job. There’s a problem with his passport, a device Ambler used more than once to give “the authorities” (whomever they may be) leverage over the character. Vadassy left some film at a local shop for processing, but photos of a secret military installation are found on the roll. He’s arrested. The investigating officer believe’s Vadassy’s plea of innocence, but uses his passport problem to blackmail him into helping the police find the real spy.

Vadassy is hotheaded, impulsive, and Ambler presents him as an object of sympathy with just a bit of scorn thrown in. And the author’s playwriting background comes to the fore as Vadassy interviews his fellow vacationers at the Hotel de la Réserve. Dialogue is consistently first-rate across the spectrum of Ambler novels, especially when his characters settle into lengthy descriptions of politics and history, where a deft hand is needed to keep the momentum going. 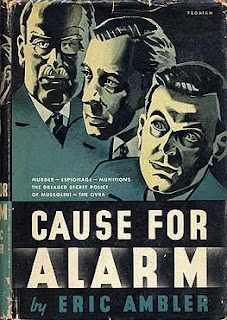 Which is not to take away from Ambler’s expository passages. In Cause for Alarm (also 1938), for example, a young British engineer named Marlow, on the brink of marriage and suddenly without a job, takes a position in Milan that his predecessor left under mysterious circumstances. It won’t surprise you to learn that Marlow gets swept up into an intrigue that involves murder and fascist politics. As he eventually puts it, in the first-person narrative, “Twenty minutes before, I had been a comparatively composed Englishman returning from doing what I was conscious of being a sound piece of work. I had been looking forward to a quiet dinner, a couple of hours in a cinema and an early bed with a new book to read. Now I was a fugitive from the Italian secret police, hiding in lavatories, cheating ticket collectors and contemplating leaving a train in an unconventional and illegal manner. It had all happened far too suddenly. I couldn’t adjust my mind to these new and fantastic circumstances. I found myself wondering seriously whether perhaps by pinching myself I might wake up to find that I was, after all, still in bed in Rome.”

The Mask of Dimitrios (1939, published in the UK as A Coffin for Dimitrios) brought Ambler his largest share of international acclaim. We meet Charles Latimer, a university professor turned mystery novelist who, on a visit to Istanbul, meets the suave Colonel Haki, who may be the head of the local secret police. But Haki is a fan of Latimer’s books, and wants to share a (terrible) plot idea that he might wish to turn into a novel of his own. During that meeting, Haki notes that the body of notorious criminal Dimitrios Makropoulos has washed up on shore, and the more he describes the Makropoulos case, the more fascinated Latimer becomes in discovering the true history of the villain, embarking on a search that will take some fantastic (and nerve-wracking) twists.

The title may seem familiar from the workmanlike 1944 movie that Warner Bros. made from the story. Despite the pairing of Peter Lorre and Sydney Greenstreet, the script is hamstrung by its layers of flashbacks (used much more clearly in the novel) – but it remains a more entertaining film than the adaptation of Background to Danger that emerged a year earlier. Lorre and Greenstreet again have choice roles, but protagonist Kenton becomes American traveler Joe Barton, played by George Raft – who was (according to Ted Sennett in his book Masters of Menace) “as always, totally wooden, his face seldom expressing any emotion except sullen petulance.” 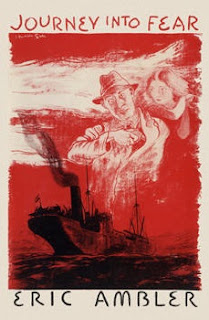 Ambler went on to serve in World War II, publishing only one more novel until he resumed such work in the early 1950s. Journey into Fear (1940) is an extremely taut thriller, packing its suspense into what should be a routine trip by cargo ship, on which engineer Graham is trying to get from Istanbul to, eventually, his home in England. Colonel Haki returns, this time to try to help Graham to safety – because Graham designed a Turkish defense system that could thwart Nazi ambitions, and is being stalked by a German assassin. It’s another grab-bag of fascinating characters that our hero meets as he tries to avoid harm, and the tension builds with merciless relentlessness.

This novel, too, was filmed, with Norman Foster nominally at the helm of a script written by Joseph Cotten and Orson Welles, who played Graham and Haki, respectively, but RKO butchered the film after firing Welles from another project, and the 68-minute movie that emerged is a mess.

The good news – the best news – is that Ambler’s novels are finally finding their way into e-book form. The website ericamblerbooks.com has been set up to get these into your hands, and will give you starter book just for surrendering your email address. It will be one of his later titles, which haven’t achieved the same level of fame as his earliest books, but most of them are just as worthy. And I’m going to take a look at some of those titles in a subsequent post. Stay tuned.
Posted by B. A. Nilsson at 11:33 PM