From the Tech Vault Dept.: As CD-ROMs came into their own (over 20 years ago!), I was thrilled to see those capabilities put to use burrowing deep within some classical-music standards. Beethoven’s Ninth, of course, but then the discs I reviewed below were issued, focusing on a piece of chamber music and a game-changing orchestral warhorse. They were (and remain) great fun to explore.

WHAT’S FASCINATING ABOUT A GOOD PIECE OF MUSIC is its longevity. Not only will it stand up to repeated performance over the years, it will also sound fresh after you’ve cycled the CD player into its sixth consecutive session. 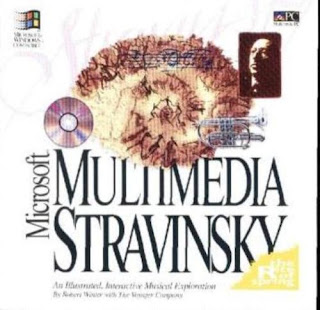 With that in mind, and taking advantage of the capacity of a CD-ROM to store both music and text, the Voyager Company recently issued two more titles in its interactive series that began with Beethoven’s Ninth Symphony. Mozart’s “Dissonant” Quartet and Stravinsky’s “The Rite of Spring” may never share a concert bill, but taken together they illustrate the diversity of focus this interactive format allows even as each disk pumps reams and reams of information at the interested auditor. Put together by UCLA professor Robert Winter, the accompanying material is impressively free of academic fustiness.

The “Dissonant” Quartet was written in 1785 and published as part of a set of six string quartets--for two violins, viola, and cello  – dedicated to Haydn, who pretty much formalized that instrumental structure. It earned its nickname by its use of unexpected harmonies, a shocking device that has lost much of its bite over the centuries.

While it’s impossible to listen to the piece with 1785-era ears, “Multimedia Mozart” does its best to remind us of the period. An interactive tour of Mozart’s life gives 66 screens of photos and information that further expand into hypertext definitions, bibliographical citations, and, best of all, many musical examples.

To put the “Dissonant” Quartet in historical focus, a section titled “quartet listening” does an excellent job of explaining the whys and wherefores of the format, and why it has been so attractive to composers – and listeners – for so long.

The focus of “Multimedia Stravinsky” is on the orchestra and the dance. “The Rite of Spring,” noted for causing a small riot in Paris during its 1913 premiere, was written for Sergei Diaghilev’s dance company Ballets Russes, choreographed by the legendary Vaslav Nijinsky. The pounding, manic rhythms of the work alternate with music of such sensuous languor that many in the audience were outraged. 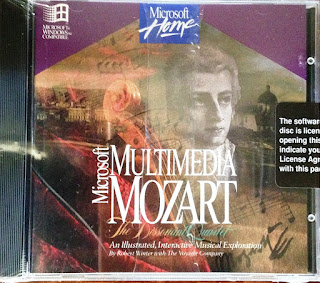 It’s not a reaction that would be terribly likely in 1994, which may serve to obscure the other ground-breaking aspects of the work. Which is why the 157-screen section titled “Rite Listening” is essential to develop a sense of musical and historical context. Breaking the work down into its components of theme, harmony, rhythm, and cadence, the section reminds us (with many musical examples) how powerful a piece the “Rite” remains.

There’s also an engaging look at the original choreography, long lost but recently reconstructed. No video (what a package that would be!), but descriptive phrases linked to appropriate musical passages.

At the heart of both disks is the work itself, which plays continuously in the “Close Listening” section to a succession of informative screens (175 in the Mozart, 203 in Stravinsky). Along the way you can stop, examine musical scores, and listen to component themes. It’s as active a listening experience as you can have, and that’s probably the most valuable aspect of this multimedia approach to music. We’re so used to music as background noise that the effort required to make the best use of one of these disks will help with the appreciation of all music.

And there’s a delightfully goofy pay-off, too. Each of these disks finishes with a quiz in the form of an interactive game, and you’ll really have to know your stuff to get through it. It’s more fun than school, though, and you’ll probably learn a lot more than you ever picked up in a classroom.