THERE’S NO SOCIAL MEDIA, no presence of cell phones in “Company” – not surprising, considering that the musical had its Broadway debut in 1970, which now seems pretty antediluvian.  But the show itself does not, as brilliantly proven by the production at Pittsfield's Barrington Stage. This Berkshires-based company has gained a reputation for presenting shows – especially musicals – of such quality that their “On the Town” from 2013 transferred to Broadway for a healthy run.

This “Company” certainly cements that reputation. The show is rightly famous for its Stephen Sondheim songs; if the witty book by George Furth isn’t as lauded, this production should help change that, seeing how all the laughs and pain and absurdities come across with easy precision.

It’s an ensemble piece performed here by such strong talent that there isn’t a weak spot, even when they’re down a cast member, as happened the night I saw the show (one of the actors had to leave suddenly to be at the birth of his child). And it was performed with a excellent nine-piece pit band, relieving the actors of what’s become an overused gimmick of having to play their own instrumental accompaniment.

Bobby is a 35-year-old eternal bachelor, surrounded by “the good ‘n’ crazy people,” his married friends – five couples who celebrate Bobby’s friendship (“seven times a godfather”), encourage him to marry – and grow jealous when he finds a bedmate. Aaron Tveit embraces the role with the same vigor and dedication he brought to the lead role in last year’s live TV broadcast of “Grease,” but here he trades Danny’s braggadocio for Bobby’s reserve. Even so, he brings out the complexity of Bobby’s character through a skilled level of acting that allows the facade of reserve to peel away and reveal the fear beneath.

Bobby has the showstopping number “Being Alive” to finish the show, and Tveit has the patience to allow the song to encapsulate his journey, giving it a more intimate start but losing none of the gutsy intensity that animates its finish. “Marry Me a Little,” a song dropped from the first Broadway version of the show, has been restored and serves as the Act I finale – and it’s another brilliant solo opportunity that Tveit enthusiastically embraces.

But he’s also a skilled ensemble player. Act II opens with “Side by Side by Side,” describing the interdependence of Bobby and friends in a cheery DeSylva-Brown-Henderson type of number with appropriate vaudeville movement (thanks to choreographer Jeffrey Page, about whom more in a moment). Tveit’s light, happy dance underscores his status as third wheel to these couples, who soon turn into a cheerleading throng that blithely reenforces what must be Bobby’s deepest fear. 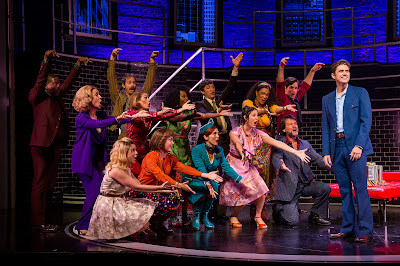 The middle-class veneer of the marriage of Sarah and Harry shows its cracks as they jibe at one another throughout Bobby’s visit, letting Jeannette Bayardelle and Lawrence Street break the comic ice with their deft timing and intonation. Peter and Susan (Kate Loprest and Paul A. Schaefer) seem far more happy and settled, and the actors complement each other so well that the bombshell they drop is the more surprising – and gives us the first crack in Bobby’s emotional armor.

The panic of impending nuptials is beautifully captured in “Getting Married Today,” sung by wedding-garbed Amy (Lauren Marcus) and her fiancé Paul (Joseph Spieldenner). It was the richer for not being rushed, and Marcus did justice to the tongue-twisting lyrics while working in a terrific sight-gag.

Spieldenner stepped into the role of David for the performance, working script-in-hand to play a scene with Jane Pfitsch as wife Jenny experiencing her first reefer – and playing part of the scene while standing on her head! Then there are Joanne and Larry. Ellen Harvey is the caustic veteran of three marriages, with long-suffering Peter Reardon as her present mate. But she has her cap set for Bobby, too, and Harvey steals the show with “The Ladies Who Lunch,” which she solidly wrenches away from Elaine Stritch’s legacy by putting an all-too-convincing stamp of booze-inspired anger on it.

But every song is a winner. Mara Davi, Nora Schell, and Rebecca Kuznick are Bobby’s current flames, and combine in the sprightly, ill-tempered close-harmony number “You Could Drive a Person Crazy. Schell beautifully renders the melancholy “Another Hundred People,” while Davi plays the flight attendant on her way to “Barcelona,” a duet with Bobby that teaches him to be careful with persuasion.

The action plays out on a multilevel set (reminiscent of the original production) with Manhattan vistas, the deft creation of Kristen Robinson. There’s a goodly amount of dancing, and Page’s work throughout recalls the ‘70s without slavishly recreating the area – and shows Tveit’s considerable terping talent to breathtaking effect. Likewise, Sara Jean Tosetti’s costumes have touches of the ‘70s about them, but it’s not a museum show – it’s timeless. Barrington Stage artistic director Julianne Boyd directed the production, which has come to mean a guaranteed seal of quality. No surprise, then, that the production has been extended a week, until September 10. It’s become the season’s most-desirable ticket, so you know that, when you see it, you’ll be in good company.