From the Restaurant Vault Dept.: Jim and Ute Mehalick opened the Hofbrauhaus in Lake George in 1980, and ran it there for a decade; they relocated to Queensbury to operate The Grill at the Ramada, which, after a decade, they renamed The Old Hofbrauhaus, which they ran until a few years ago (the internet trail is a little vague). My 1987 visit to their Lake George location captures a lost moment in time both for the eatery and the village.

HEADING UP PEACEFUL ROUTE 9 to Lake George Village puts you smack in the middle of an area that rivals Wildwood Beach and much of the Los Angeles area for tackiness in architecture. Although I'm particularly fond of oversized plaster lumberjacks with an arm raised in stiff greeting to traffic, I can do without the various houses of horror and souvenirs (the two go together; they're indistinguishable). 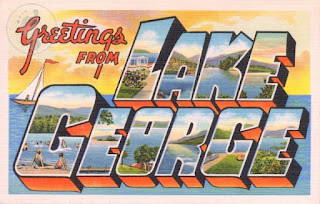 So it was with some surprise that we found a particularly pleasant German restaurant nestled amongst all the garishness.

The Hofbrauhaus does share the architectural weirdness of the strip, with its low-slung roof and large, sloping front windows; inside are the large dining rooms, salad bar, and an enclosed porch. It looks more like a bowling alley than a restaurant, but that's typical of this part of Route 9.

Inside, very early one recent Sunday evening, all was stille. The staff was finishing dinner, but we were quickly seated by one of the large windows that looks out upon the street.

The menu starts with eight Vorspeisen, or appetizers, among which is a soup and salad bar combo that comes anyway with all entrees.

But Susan, herself of German descent, couldn't resist the Leberknoedelsuppe as a starter. The knoedel is a sort of dumpling, in this case made with liver. You who are too timid to enjoy liver won't appreciate this, but we who've made friends with the stuff are eager to try it in any form. In fact, I ordered the sauteed chicken livers for my Vorspeise.

And they were out of this world. Ute Mehalick, who runs the place and supervises the cooking, wasn't eager to share the ingredients, so we'll leave it for your on-premises delectation. The soup, in which the knoedel floats like a quenelle, was only a modestly good vehicle for a delicious dumpling. As with the bean soup featured on the salad bar, it was much too salty.

Service seemed a little sluggish since, being one of only two tables of customers, we didn't see our waitress for long periods; but she was extremely helpful despite her unfamiliarity with the language of the cuisine she provided. It was all she could do to pronounce Zigeuner Schnitzel.

But she warned Susan that the Gypsy-style veal was a very spicy entrée – so I ordered it instead and left my wife to the traditional Sauerbraten.

We gorged ourselves on the salad bar even before the appetizers arrived. It's a modest-sized array of greens, although the inviting-looking spinach needed to have stems trimmed (you can't just shake it out of the bag, folks) with sides of salads (cole slaw, kidney beans in sour cream, carrot and raisin salad, that sort of thing). As much as I dislike the theory of a salad bar, I still have no trouble making two or three trips if one is at hand.

Susan's Sauerbraten was marinated just right, with a lip-puckering tang to the meat and a full-flavored sauce to complement. Traditional accompaniments of steaming red cabbage (Rotkohl) and a large potato dumpling were more than she could handle in a serving and formed the basis for supper the following night, too.

What gives the veal its zing are tangy hot peppers sauteed with the meat. Mushrooms and onions complete the garnish, and the sauce accentuates the spiciness. For one such as I who orders his Buffalo-style wings with triple-X sauce, this was actually rather mild. But very satisfying.

And it would have been worth it for the side order of Spaetzle, which I recommend over everyday potatoes as your starch.

We barely scratched the potential of the menu, which carries many more beef or veal dishes, along with preparations of pork, chicken, duck and fish.

The made-in-house desserts include a traditional Bayerischer Apfelstrudel and, my favorite, Schwaerzwalder Kirschtorte, the Black Forest cake of cherries, dark chocolate and lots of heavy cream.

This is the Mehalick family’s seventh year of operations near Lake George; they have since drawn a very faithful clientele from among the local residents, quite a compliment for a tourist-area business.

Dinner for two, with tax, tip and beverage, was $47. Metroland restaurant reviews are based on one unannounced visit; your experiences may differ.