From the Seller’s Cellar Dept.: Pennsylvania approved the sale of wine in grocery stores two months ago, prompting some talk of New York looking again at doing the same. It hasn’t been on Gov. Cuomo’s agenda, and the disadvantages of such a policy haven’t changed since I penned this piece in 2009.

AMONG THE NEW YORK STATE DEPARTMENT OF BUDGET’S many breathless proposals to save, grab or re-claim money, the one of most concern to this column is a proposal to allow wine sales in grocery stores. It’s pitched to accrue something like $150 million over the next three years ($105 million the first year; far less thereafter), most of it coming from the licensing fees the supermarkets would pay. 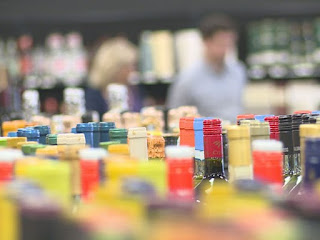 Whether all 19,000 grocery and convenience stores across the state actually would pony up is but one of many variables projected into this proposal. But the Business Council of NY State has eagerly signed off on the issue, promising that it “will create new markets for upstate and Long Island wineries and convenience for consumers,” according to council president Kenneth Adams. “In addition, the proposal will generate new revenue for the cash-strapped state.” It’s a point of view no doubt shared by two of council’s board members with a large stake in the issue: Paul S. Speranza, Jr., General Counsel and Secretary to Wegmans, and Neil Golub, CEO of Price Chopper.

At a press conference in Albany last week, Golub said, “I don't think the wine and liquor stores do as good a job as we do in terms of promoting New York products.” Of course, if you’ve tried to buy New York-produced maple syrup or honey in one of his local stores, you’ll appreciate the fantasy inherent in that statement.

Although the budget measure is opposed by a large number of New York’s wineries – including 95 percent of the Long Island producers – the New York State Wine Grape Growers and the NY Farm Bureau both have aligned themselves behind the measure, also seeing acres of new shelf space in those 19,000 stores. But unless backroom promises are going unreported, there’s been no commitment from the stores to anyone for anything.

As of now, wine is sold across the state in 2,600 licensed liquor stores, and accounts for the majority of sales in those stores – 65 to 80 percent – far outstripping sales of spirits. Liquor carries a much higher excise tax, and thus affords a smaller profit margin, another reason why the supermarkets are avoiding it. (Although the state’s budget proposal also seeks to triple the excise tax on wine from 18.9 to 51 cents per gallon.)

National Federation of Independent Business members voted to oppose the proposal (67 to 30 percent), and an advocacy group called Last Store on Main Street (lastmainstreetstore.com), representing 2,742 New York wine sellers and liquor store owners, says the move would force more than 1,000 such stores out of business and lead to a loss of more than 4,000 jobs, prompting a sharp spike in the state’s unemployment payments.

Wine contains three times the alcohol level of beer, so if you’re looking for a quick buzz, it could become your beverage of choice. Law Enforcement Against Drunk Driving chairman Dan Sisto announced early last month that a review of recent State Liquor Authority data showed that nearly 90 percent of violations for serving minors in off-premise stores were in grocery and convenience stores.

Wine stores, by definition, are gatekeepers. “If they’re under 21, we don’t even let them come in and browse,” says Delaware Plaza Wine store owner Todd Yutzler.

Although 35 other states allow wine sales in grocery stores, no such measure has been passed in 23 years. And Florida, California and Texas, where wine is widely available, boast alcohol-related fatality statistics that are twice the number in New York, and three times higher for deaths of those under 21.

Terming the issue of wine in grocery stores a “no-brainer,” Albany Times-Union columnist Fred LeBrun recently wrote, “The advantages of New York selling wine in grocery stores, particularly in these economically off-the-cliff times, are so obvious and overwhelming as to be self-evident. New York consumers would instantly encounter vastly more choice and convenience in terms of availability, which in turn translates into more wine sales, happier drinkers, more state sales tax and far more outlets for the state wine industry. Who could argue?”

Many, as it happens. The many who’ve seen how big-box consolidation has ruined so many other specialty businesses, like hardware stores, book store, clothing shops, butcher shops, restaurants. Personal service is killed, and money flows out of the state into the corporate coffers. Putting wine in Walmart ultimately benefits only some Arkansas millionaires.

There are some for whom buying wine is a process of grabbing a bottle of Yellow tail. Those people would be understandably enthusiastic about finding their plonk on the grocery-store shelves. For the rest of us, wine buying is a journey, an exploration. As with dining, it invites you to stray from familiar paths.

Along with serving as a deterrent to too-young drinkers, wine stores offer staff members who share your eagerness and will guide your way, through tastings and other sales events to the recommendations they make based on personal knowledge – and knowledge of you.

Our society as a whole has been too arrogant and greedy to resist the big box invasion that put so many of our neighbors out of business. Wine drinkers are a more discriminating minority, and understand that exploration is part of the fun. At this point, the matter is in the hands of our legislators. Let’s let them know how we feel.