From the Vault Dept.: Back in the late 1980s, the Cohoes Music Hall was under the artistic direction of Robert W. Tolan and churned out one hit show after another. A mainstay in several of those shows was Deb G. Girdler, whom I profiled in early 1989. She’s back in her native Cincinnati, where she just appeared in an acclaimed production of “Cinderella” with that city’s Ensemble Theatre; she’s also hit the big screen in the movie “Carol.”

SHE MAKES IT SOUND as if she’d leave acting in a minute and settle down in a dressmaking shop in Cincinnati, but stays on, oh, for the fun of it. She makes it sound easy. Makes it look easy, too, unless you’ve seen a few of the Heritage Artists productions this season at the Cohoes Music Hall. Deb Girdler has been in every one of them, a tour-de-force lineup of impersonations that have ranged from sultry to bratty to funny as hell. 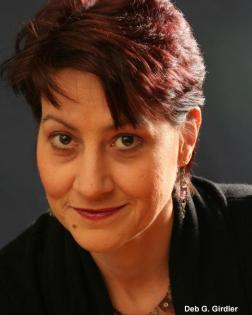 Watching her rehearse “I Do! I Do!,” in which she’s currently starring, gives you a feel for the craft she tries to conceal. Her character is pregnant, so Girdler has her walking in bowlegged syncopation, tilted slightly. The comedy is applied with skillful care: the character is never unbelievable. The finished product, which finds the actress beautifully gowned and amusingly pillowed, draws those low, knowing chuckles from the audience that are the best testimony to comic skill.

She’s a trained singer and dancer but those abilities are only underpinnings to her most obvious attribute: in the tradition of Gertrude Lawrence and Judy Holliday, Girdler is a comedian. That’s an extra touch of theatrical skill – many can act, few can transcend it with a comic sense.

Talk to her and you realize you’re being collected, another set of mannerisms for her histrionic lexicon. At the same time she speaks charmingly, a little Kentucky resonance belying her native state. “I’m having a great time here,” she says, indicating the Cohoes Music Hall. “Being in all these shows is like a dream for me. It gives me plenty to do, which is good – I get bored so easily.” She laughs, a gesture you recognize from the stage. It’s a contagious, Joyce Grenfell-like shriek. “And I always seem to end up in these nifty old little places. I’ve worked at the Charles Theatre in Boston and Ford’s Theatre in Washington – the only new place I think I’ve appeared in was at the Conservatory of Music in Cincinnati.”

She has home and family in that Ohio town, which she prefers to the madness of Manhattan. “I went there when I was 26,” she says, “and it was awful. I was up against these women who were 45 and going nowhere and it was depressing! I went back to Cincinnati.”

With so busy a season there hasn’t been much time for visits home. She won’t fly – “There isn’t enough Valium in the world to calm me down if I get in an airplane – ” and contents herself with visits to friends in New York when there’s time off.

When she is home she does some costume design and dressmaking. “I do a lot of dance contests. You’d be amazed how many dance contests there are out there.”

She met David Holdgrive, director of “I Do! I Do!”and many other Heritage Artists productions, while working on the Showboat Majestic on the Ohio River. “We were 14 and 16. We hated each other. We each thought the other was ugly and had no talent.” Now she describes him as one of the few directors who isn’t intimidated by her.

What’s so intimidating? “I’m five-eleven barefoot,” she explains, with that face-wide grin that’s a trademark. “I had to be a comedian. I had no choice.”