Have Song, Will Travel

“BEYOND THE BLUE HORIZON” often is sung (when it gets sung at all) as the telling of a dream, in an “Over the Rainbow” approach. When Molly Ryan sings it, as the second track of her new recording “Let’s Fly Away,” it’s with the determination of one who has the tickets in hand and is raring to go. 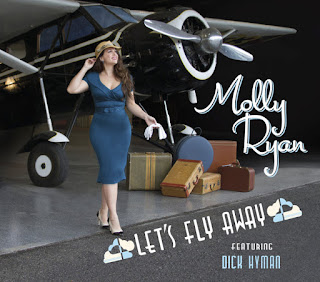 Travel is the theme of this collection of fourteen songs, recorded with an outstanding group of instrumentalists. It’s bookended by a pair of “wander” numbers, beginning with Bud Flanagan’s “Wanderer,” better known in England in the 1930s, but as shrewd a stage-setting song as could have been selected. “Leave me alone, let me wander,” Ryan sings, but her claim to be a roving vagabond is colored with the possibility that she wouldn’t mind some company.

That’s due in part to her self-assured, jazz-inflected style, and in part to the chorus that precedes her entry, with tight brass phrases and decorative response by Mark Shane’s piano. These players swing, and that offers its own irresistible invitation to follow.

Ryan can jump – we hear it in Cole Porter’s “Let’s Fly Away,” which she seems to caress even as the band is busily jamming behind her. Dick Hyman – the other pianist on this disc – takes a solo that then launches the boogie-woogie finish to the song. But then she shifts gears into a ballad, crooning over the solo-guitar start of “Far Away Places” and keeping it wistful even as the instrumental texture builds. Sure, this one has been recorded by everyone from Margaret Whiting to Willie Nelson, but Ryan seems to make it more friendly.

Dan Levinson’s samba arrangement of “Flying Down to Rio” contrasts effectively with Dan Barrett’s swing version of “A Rainy Night in Rio.” Levinson, who co-produced the recording with Ryan, also handles clarinet and tenor sax duties, while Barrett works the trombone.

The rest of the ensemble is drawn from the top ranks of jazz players, with cornetist Randy Reinhart, guitarist John Reynolds, and drummer Kevin Dorn among them. Trumpeter Bria Skonberg joins Ryan for the vocal on “The Road to Morocco,” a Bing-and-Bob duet that they turn into a fitting tribute that’s just as funny.

And violinist Adrien Chevalier shows his stuff in the Django-inflected “Under Paris Skies,” in which Ryan demonstrates not only her facility with French, giving us the lyric in that language as well, but also as a guitarist in the group.

The youngest song on the program is the Cahn and Van Heusen “It’s Nice to Go Travelin’,” written for Sinatra in 1958 (and, as the penultimate number, a fitting wind-down). The oldest is “Song of the Wanderer,” from 1926. Your familiarity with the songs will depend on how deep into the jazz-era past you yourself have wandered, but all of them deserve this resurrection and each gets the treatment it deserves.

At the end of the disc is Frank Loesser’s “Anywhere I Wander.” Here it’s Hyman’s piano laying down an easygoing bed for Ryan’s burst of longing. By the time you get here – after an itinerary that has included Brazil, Morocco, France, and Polynesia – you know that it’s good to be home. But what a great trip! And what terrific companions!