MARTHA ARGERICH IS A PIANIST for whom no music seems too technically challenging, but one with strong repertory preferences. Like Horowitz, she has burrowed herself into a not-terribly-large group of pieces, and to which she brings a bravura interpretive style filled with risk-taking that results only in excitement. 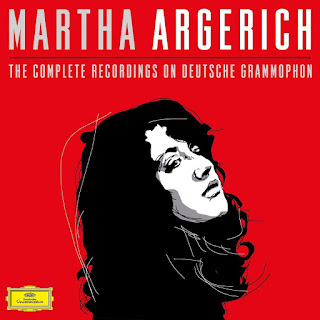 Most of her official recordings have been for EMI or Deutsche Grammophon, and the latter, now under the aegis of Universal, which includes her recordings for Philips, have just been collected into a 48-CD box set as tempestuous and unpredictable as the pianist herself.

Her debut album was recorded in 1960 and comprised an impressive program of works by Chopin, Brahms, and Liszt, with Prokofiev’s “Toccata” as a harbinger of fiery works to come. You can feel the powers-that-be at work in choosing repertory here, and they’re probably behind the (nevertheless excellent) all-Chopin disc that followed seven years later.

But that same year also saw the release of a benchmark recording, on which she and a young Claudio Abbado collaborated, giving us Prokofiev’s Concerto No. 3 and Ravel’s Concerto in G. They are two works she would continue to champion but which sound as splendid here as they ever would.

Pianist and conductor seemed to incite one another. Abbado’s robust dynamics and keen orchestral textures are like a trampoline for the pianist, lofting her to magnificent moments. You expect this (or hope for it) in the Prokofiev; in the Ravel concerto it’s more of a surprise, but a welcome one.

The two recorded the Ravel again in the CD area, and this one is snuck onto the Argerich/Abbado 1968 pairing of the initial concertos by Chopin and Liszt, again a group of impressively lively performances.

Some piano concertos are significant by their absence: Nothing from Brahms and Bach, three only by Mozart, one (no. 3) by Rachmaninoff, and there would have been only the first two by Beethoven had not Abbado talked her into recording the third with him. But Tchaikovsky 1 is represented here thrice and Schumann’s puts in two appearances.

Argerich’s summer festival in Lugano, Switzerland, yields an annual three-disc set on EMI; DGG got rights to a number of concertos recorded between 2004 and 2010. Beethoven, Mozart, Prokofiev, Schumann, Bartók, and Liszt are on deck, along with unexpected treats like Poulenc’s Concerto for Two Pianos, Brahms’s Liebeslieder Waltzes, and Stravinsky’s Les Noces, the last-named last recorded by Argerich with Leonard Bernstein in 1977 (CD 10).

Duo sonatas abound. Although not at all a completist when she’s on her own, she laid down all five of Beethoven’s cello sonatas with Mischa Maisky and the ten violin sonatas with Gidon Kremer; with Kremer she also recorded both of Prokofiev’s violin sonatas, the first two of Schumann’s three, and sonatas by Bartók and Janáček as well as a brief, poignant set of variations by Messiaen.

With Maisky she also recorded Bach’s six cello sonatas, Schubert’s Arpeggione Sonata, a bunch of Schumann pieces (a couple of them twice), and sonatas and such by Chopin, Prokofiev, Debussy, Shostakovich, Stravinsky, and Franck.

I’ve gone from hating those Beethoven violin sonata recordings to growing quite fond of them over the years; what seemed like interpretive excess now strike me as adventurous choices. Kremer is a good partner for the pianist, for he, too, seems to be discovering a piece as he performs it.

For chamber music, the Lugano recordings are a bounty; only two such discs are in this set, both, not surprisingly, also featuring Kremer and Maisky in works by Brahms, Schumann, Tchaikovsky, and Shostakovich, the last two a pair of emotionally shattering trios.

Argerich has enthusiastically welcomed other pianists onto the stage, and the collaborators here include Nelson Friere (Rachmaninoff, Ravel, Lutoslawski, Brahms, Schubert), Nicholas Economou (Tchaikovsky, Rachmaninoff), Mikhail Pletnev (Prokofiev, Ravel), and Daniel Barenboim (Mozart, Schubert, Stravinsky). In some cases, these are transcriptions of orchestral works, which work better than I expected: Ravel’s “La Valse” is blistering, Stravinsky’s “Rite of Spring” is a reminder of the piano’s easy journey into orchestral sound, and a suite from Prokofiev’s “Cinderella” reveals the pianism behind so much of that composer’s work.

There’s much, much more awaiting, including one of Argerich’s few forays into solo Bach, tantalizing in its comparative brevity, and a charming, eccentric version of Saint-Saëns’s “Carnival of the Animals” with chamber ensemble, and the beautiful conclusion to her recording partnership with Abbado: Mozart’s Concertos Nos. 20 and 25, recorded at the Lucerne Festival in 2013, and as endearing a pair of performances as you’ll ever hear.

Although this is an original-jackets style set, don’t always trust what’s promised on the cover. The cover of CD 11, in particular, which is completely at variance with its contents. Bartók’s Concerto for Two Pianos and Percussion is, in fact, on CD 10; CD 11 sports Bartók’s Sonata for Two Pianos and Percussion and other works by Bartók, Debussy, and Mozart, which had its own pleasant cover upon issue. The booklet accompanying this 48-disc collection will guide you through its vagaries, offering also a couple of overview essays and a repertory list.

I plowed through the set chronologically, hoping to get a sense of Argerich’s artistic growth. My conclusion: She came on the scene fully formed and ready to take on all comers, making this collection an accumulation of riches from start to finish.