On a Ravioli Roll

CRUSHING YOUR CONCOCTION into pillows of pasta is the fun part, the payoff for the work you’ve been through to get there. For the many years that I’ve made ravioli by hand, I accepted that forming the pockets was tedious and the result – under my stewardship, at least – was irregular. But now that I’ve been introduced to the simplest of gadgets, one that checkerboards the pasta for you, I’m a total convert. Even better: It’s a handsome device that demands a place on an obvious shelf. 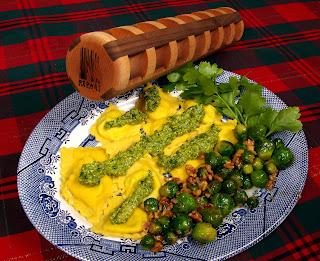 The Fonde Ravioli Rolling Pin from Repast Supply Co. is a 17-inch, all-hardwood marvel of simplicity that produces 2 1/4-inch pasta squares with enough of a border to prevent leaking. You can see product videos here, but let me assure you that you’re not going to achieve such perfection right out of the gate. Let me take you through my own ravioli-making process.

You need to nail the pasta recipe. I looked at a variety of them for the egg-based version, which only worked when I increased the amount of eggs in the mix. A food.com contributor gives a ratio of 3 cups flour to 2 eggs, which ends up as a stiff lump. The classic Silver Spoon cookbook offers a more realistic 1 3/4 cups flour to 2 eggs, but that’s still too not pliable enough for our purpose.

Both the Rome Sustainable Food Project and Mario Batali suggest 1 lb. flour (about 3½ to 4 cups) to 4 eggs, and that’s about right, but that’s a lot of dough. One egg per cup of flour seems about right – it’s even given on Repast Supply’s website  – but I’ve been liking an eggier recipe from Repast Supply’s Kenan Hill, who mixes a cup of flour with a cup of semolina, then adds four whole eggs and two extra yolks. It’s eggy, and it takes at least a cup more flour as I’m forming it, but it gives the elasticity I’m looking for once it’s kneaded and has rested for a while.

For the preparation that’s pictured, I used leftover smoked turkey, mixing it with a pound of ricotta and a cup of grated parmesan, a couple of bunches of late-season parsley from my garden and another two eggs.

After an initial flattening (pictured), I divided the pasta recipe in two, dreaming that I would be able to roll it into a rectangle, accepting that fact that such is not to be. I rolled out the halves until they were just about translucent, and covered one of them with the filling (pictured).

The payoff came once the top half of the pasta was fitted. A slow, determined advance across the sandwich left beautiful ravioli pillows in its wake. Some of the edges squirted filling, and a small mass of filling was pushed out the far side. None of it went to waste.

Carefully run a fluted ravioli cutter along the aisles and you’ve got something that looks as good as store-bought (but be sure to put flour or cornmeal under the lower layer to keep the squares from sticking).

I made a batch of pesto using arugula and sunflower seeds, and dinner was complete. A lingering stalk of Brussels sprouts yielded enough to steam and then sautée with walnuts, and that was dinner. With leftovers.

Now that I’m going even deeper into holiday-entertaining mode, I’ll be experimenting with more adventurous fillings. The Ravioli Pin has easily rolled its way to my shelf of kitchen essentials.
Posted by B. A. Nilsson at 8:14 PM

Thanks so much for this great feature! I'm the Fonde creator, Michael FInizio.