From the Cookbook Shelves Dept.: I made the lasagna recipe from the book Laurina’s Kitchen, and it’s amazing. Fluffy and flavorful, a perfect ratio of meat to cheese to pasta. Sorry, but there will be no leftovers by the time you get here. The book was launched three years ago, when I wrote the piece below.

IT WAS A SCENE YOU’D SEE near the end of an adventure epic, when the explorers finally break through to the treasure chamber and survey its long-neglected majesty. In this case, it was the kitchen of the former Ecobelli’s Tam O’Shanter Inn on Route 50 in Ballston Spa. The place has been closed for many years, but the kitchen remains intact, and as the party guests wandered in, they shared stories of the years they’d spent working here. 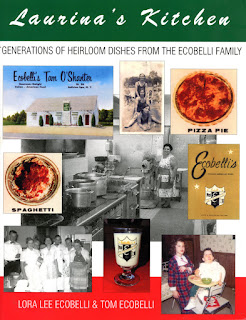 “I remember filling that sink with fish before I cleaned them.” “I remember when they put that stove in.” “You must have worked here after I left, but I remember your father.”

On Aug. 4, the building was opened to host a party for the launch of Laurina’s Kitchen, a cookbook put together by the sibling grandchildren of the restaurant’s indelible chef, and as Lora Lee and Tom Ecobelli busily signed copy after copy, they were deluged with fond reminiscences.

“We asked for people to send us stories as we were putting the book together,” says Tom, who is an actor and writer living in Los Angeles, “and discovering what the restaurant meant to people really blew us away.”

Lora Lee lives in Saugerties and also works as an actor and writer. “We’re still getting stories,” she says. “Someone called me just the other night and remembered that back in the ’60s, before the restaurant had anything like take-out containers, people would line up by the pizza ovens carrying their own pots. My grandmother would ask how many were in the family, and top off the pots accordingly.”

Laurina Inzinna Ecobelli’s restaurant history begins in 1947, when she and her husband Dan bought the rundown Tam O’Shanter Inn and learned the business as they went along, with the help of son Ralph. What started as a small tavern blossomed into a full-fledged restaurant. By the time they sold it in 1979, it had become a community fixture recommended by Duncan Hines and winning a write-up in “Gourmet” magazine.

“It has amazed me,” says Tom, “to learn about all the people who met and fell in love and got married because of this restaurant.” Adds Lora Lee: “It really was more of a community center.”

Laurina’s Kitchen collects the recipes the brother and sister remember, along with contributions from other family and friends, each presented in an easy-to-follow way accompanied by a photo of an actual finished product, not a studio-posed impossibility. But it’s also a book of fond reminiscence, with essays by its writers and others with stories to share. And it’s crammed with photos.

So it works very well as a gateway to the life and work of a woman whose restaurant her friends and neighbors treasured. But there was much more to her.

She was the child of immigrant parents. Her father died when she was an infant and she and her sister were placed in an orphanage by her destitute mother. When her mother remarried, Laurina and her sister were moved upstate to Fonda, where her stepfather worked in textile mills. But he was abusive and jealous, and he raped and impregnated her as she was entering her teens.

Laurina kept a journal during this time, a crudely written tome that, late in her life, she passed on to Lora Lee. “She said she wanted her story told.”

It turned out to be the amazing story of a teenager who took her stepfather to court in a landmark domestic violence case unprecedented for its time and place. The journal sent Lora Lee to the Montgomery County Courthouse to pore through the testimony, and she turned the material into an Off-Broadway show “that was pretty successful, but people who knew it said that I should tell the whole story. That’s when Tom and I developed it into a screenplay, and we’ve been trying to get it made ever since.”

Already attached to it are Emmy Award-winning director Arthur Allan Seidelman and actors Chris Cooper and Julie Kavner. One-of-a-kind musical polymath David Amram (who also knew Laurina) is composing the score, and it will be filmed at locations around Fonda.

“Everybody who has gotten involved with the movie has some kind of kinship with the story,” says Lora Lee. “That’s helped us build the ensemble we have.”

A fundraising campaign on Kickstarter indirectly launched the cookbook. “We needed to offer some thank-you items,” Tom explains, “so we threw a few recipes together as one of them. The more we wrote, the more we remembered.”

Don Rittner, who heads the Schenectady Film Commission, helped the Ecobellis scout locations. He liked the idea of a cookbook, “so we sent him some of the raw pages,” says Tom, “and he put us in touch with Richard Vang at Circle Square Press, who was looking for a cookbook..”

“Richard told us that we needed to add more stories,” says Lora Lee, “and when we started looking for them, it really took off. People from all over the country got in touch with us.”

The book recreates the feeling of this bygone restaurant, but it also is finding fans in people who never knew the place. “It’s selling on Amazon,” Lora Lee observes, “and getting rave reviews there. Richard says it’s his biggest seller so far. It says something about honoring your own home. When Tom and I left Ballston Spa to pursue careers in New York, nothing happened for quite a while. What’s really worked for us has come from what we had right here.”