From the Vault Dept.: My first of three reviews of a now long-gone restaurant that thrived in a time before the Food Network destroyed any acceptance of this kind of quaintness, and fondue became another chain-restaurant gimmick.

“LA FONDUE BACCHUS CHARLES ANDRÉ for two, $32,” the menu read, continuing, “Thinly-sliced filets of beef and veal simmered at your table in a wine, vegetable and herb broth. Swiss folklore insists that you forfeit either a kiss or a round of drinks if the meat falls from the fork back into the pot.” 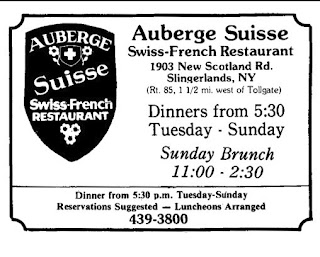 “It’s just a sentimental sales pitch,” I grumbled. “Besides, we should try different things, not an entrée for two.”

“Why do you always make the rules?” she insisted.

This was why my wife and I ordered the Fondue Bacchus one evening last week at Auberge Suisse, the year-old restaurant at the site of a 19th-century onetime convent out on route 85 in Slingerlands.

An autumn-anticipatory coolness was another incentive to call forth the fondue pot, although the feeling inside the restaurant was comfortably warm: both in atmosphere and friendliness.

Although a well-served meal is like a suspense thriller in that each chapter should top the one that came before, I rush to the climax to introduce that entree first of all.

A shiny steel pot of steamy stock was served, squat-legged with the blue fire of Sterno dancing below. The scent of it reached us well before the pot itself, first the heady aroma of hot red wine, then the summer bouquet of spices.

Alongside was served twin platters of bright-colored meat, thin as paper, a strip of light-red beef and a strip of veal the color of pearl. On side dishes were crisply-braised vegetables, a light batter of garlicky bread crumbs coating sliced zucchini and cauliflower florets; scalloped potatoes with a touch of cheese, and a piping of pureed carrots.

And the requisite long-handled forks, two of them.

Thus commenced the Battle of the Fondue Forks as we struggled for optimum simmering space. If it is important to you to follow Swiss folklore, I suggest you dine with someone you love. Based on my own experience trying to keep that meat on the fork, I would have been far, far the poorer trying to stand drinks for each incidence of slippage.

As each strip of meat yielded to the hot liquid, it curled into a delicious, mushroom-colored delicacy. Poking in the pot, we discovered the cache of herbs hidden in a tea-strainer spoon. Although participatory entrées can be a nuisance, this was a delightful--and very satisfying way to share an entrée.

Certainly it was an appropriate topper to an already-splendid meal. We started simply, soup for Susan, pâté for me; but each appetizer boasted the kind of attention that makes even a vat of soup or a long loaf of pate wonderful in individual servings.

The soup, for instance. Leek soup (actually a cream of leek, but I suspect the commercial soup canners have caused that term to change from soup stock to laughingstock), highlighting a vegetable as tasty on its own as when combined with other hearty flavors, blended in a base relying on natural flavors for emphasis: good stock, good seasoning.

The pâté, using meats and liver from veal, chicken and duck was a slice of a stiff but buttery loaf, a dab of dijon mustard on the side along with pearl onions, baby pickles and other piquant garnishes. At $5.50, it’s a bit of an investment, but one that pays off on my palate with more immediacy than, say, the Beluga caviar with vodka, offered on the menu at $55, an item my extremely limited caviar-eating leaves me in ignorance of.

Salads are served a la carte; the house salad avoids the iceberg route with a pleasant assortment of romaine and leaf, and a tangy dijonnaise dressing.

Other entree specials include rack of lamb Provencale, sweetbreads in a cognac sauce, and, as you would expect on this menu, frog’s legs in garlic butter.

The chef and co-owner, Rene Tornier, is from the Swiss suburbs of Lausanne, near Lake Geneva and the border of France. There he trained, rising through the ranks of restaurants frequented by the many doctors who also train in the area.

He and his wife, Janice, operated a restaurant in St. Thomas for several years before moving to the States; a regular customer from Delmar suggested this area just when the building they now occupy became available.

Although open for just under a year, business has been good enough to encourage them to start a Sunday brunch recently.

And, as we finished with a homemade apricot-almond-carrot cake and some coffees, our server, Marie, confided that Rene was talking just that evening about changing the menu a little as winter approaches.

“He’s going to put a cheese fondue on as a special,” she told us. I suspect we’ll be sitting before the steel pot once more before too very long.

Dinner for two, with tax, tip a crisp bottle of Gewurtztraminer, was $85.