From the Recorded Vault Dept.: Back in 1989, we still were looking for significant recordings from the LP era (and earlier) to make their way to compact disc. The Van Cliburn CDs described below have since been re-reissued, in better sound, and collected in multi-CD sets both cheap and costly, so you’ll have no trouble at all acquiring what’s mentioned. 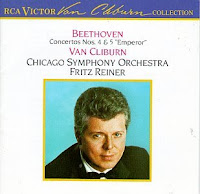 A GREYING BUT STILL BOYISH-LOOKING VAN CLIBURN stares at us from the nearly-identical covers of these five recently re-released recordings; pictured elsewhere on the jackets are photos of the very boyish, almost spindly-looking kid who rode the crest of a Moscow competition to immense fame, then to a near-oblivion that he only recently is climbing out of.

These records are therefore testimony to what was and to what we may expect. The lineup of accompanying artists is a testimony to greatness of what can now bee seen as a bygone era: Eugene Ormandy conducts the Philadelphia Orchestra and Fritz Reiner leads the Chicago Symphony Orchestra for all of the concertos included in the set.

The five recordings – issued on compact disk and cassette – are sold separately but have been promoted as a set. They contain the following works:


Beethoven: Concertos Nos. 4 and 5 (“Emperor”) with Reiner and the CSO.
Brahms: Concerto No. 2 and Five Intermezzi with Reiner and the CSO.
Chopin: Concerto No. 1 and Rachmaninoff: Rhapsody on a Theme of Paganini with
Ormandy and the Philadelphia Orchestra.
Grieg: Concerto and Liszt: Concertos Nos. 1 and 2 with Ormandy and the
Philadelphia Orchestra.Prokofiev: Sonata No. 6; Rachmaninoff: Sonata No. 2 and shorter works.

The recordings span a course of fifteen years, beginning with an extraordinary performance of the Rachmaninoff Sonata No. 2 recorded live in Moscow in June, 1960, and share a recorded sound typical of RCA Victor during its early stereo era: the ambience is very spacious, and the detail is rendered with show-off precision, almost to a point of being overmiked. 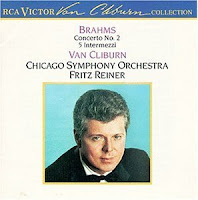 But the piano sound, always difficult to reproduce, comes through very nicely and in general complements the Cliburn touch.

It's a style that contemporary pianists have shifted away from, a richly romantic manner that sounds anachronistic when compared to the lean, brittle playing we’re hearing more and more today. In the context of the music and especially with these orchestras, it’s a successful approach. Brahms’s Concerto No. 2 is made up of a series of lush crescendi that requires a virtuoso’s restraint. With Reiner and the Chicago Symphony, there was an unbeatable combination.

Cliburn made his reputation with the Concerto No. 1 by Tchaikovsky, and his recording became a million-seller (it’s also available in a CD and cassette release). Most of the works presented in this collection are warhorses of the same stature, almost smothering you with their combination of familiarity and virtuoso nonchalance.

But it’s a refreshing re-visit to a neighborhood that had seemed all but abandoned. Cliburn was – and, we can hope, will be – an exciting player who came up in the midst of a number of other exciting players, a generation that fell by the wayside curiously quickly (Glenn Gould, Leon Fleischer, Byron Janis and Gary Graffman are among the casualties).

One of the nicest side-effects of a new technology like compact disks is that it allows us these periodic reexaminations. The Van Cliburn collection is one of RCA’s best ideas yet.