From the Musical Vault Dept.: I discovered the King’s Singers in 1982 and continue to admire not only their repertory of Renaissance material but also their many arrangements of material you wouldn’t think would work for six voices and the commissions they’ve made. Their occasional forays into schlock seem to be behind them, and I’m not including in that category such effective material as “Good Vibrations” and “Blackbird.” Here’s my review of a CD that also includes the equally admirable percussionist Evelyn Glennie.

AFTER TWENTY YEARS of strong, innovative music making, the six-man King;svocal group went through a protracted personnel upheaval and seemed to be repeating a tiresome novelty repertory to death. They switched record labels, settled on a roster of performers, and each successive release got better. 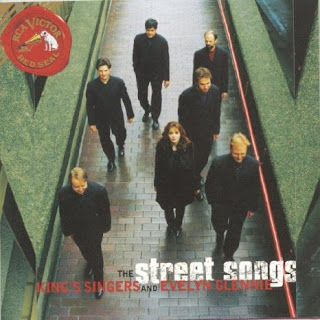 The latest, Street Songs, is what this group is all about, and it’s as good as anything they’ve ever done. This despite the fact that you see marketing written all over it. They’re paired with Evelyn Glennie, one of BMG Classics’ current money makers, and the CD’s title comes from a song cycle by Steve Martland, who has enjoyed a vogue as a writer of loud, accessible music.

But the high point of the disc is the group’s re-recording of “Lalela Zulu,” a suite of six songs written for the group over 20 years ago and first recorded as part of a monster tenth anniversary concert. Although the new version lacks the antic verve of a live recording, it hangs together better musically and is every bit as exciting–and the songs themselves, with music by Stanley Glasser and texts by South African writer Louis Nkosi, each song reflecting a different aspect of Zulu life in Johannesburg.

Composer Peter Klatzow also brings a South African background to his music, and the Stephen Watson poems comprising “Return of the Moon” celebrates the folklore of /Xam, a nearly exterminated bushman tribe. The music tends to be angular and introspective, contrasting Glennie’s marimba with the hymnlike voices of the singers.

Glennie takes a pair of solos with David Horne’s virtuosic “Reaching Out” and her own subdued “Giles,” both of which are stunning displays of technique as well as being emotionally effective in their percussiveness.

The four “Street Songs,” taking their texts from children’s play songs, are scattered throughout the CD to set off the other pieces, which is very effective. The songs themselves are as complicated as the words are simple, but in so doing Martland reminds us that our perspective on those once so innocent songs has completely changed, and that innocence is lost forever. It’s good stuff that stands up to repeated listening, and the album is an impressive follow-up to their “Nightsong” collection, one of my 1997 favorites.