Air for the E String

A recent issue of  Metroland aggregated the thoughts of its various writers about those times when technology seems to have gone too far. I challenged myself to come up with something that didn’t involve a personal computer. (Yes, the Snark qualifies as a computer, but you know what I mean.)

ONE OF THE GLORIOUS MYSTERIES of music lies in the fact that each note contains the seeds of its own harmony. An overtone of a fifth lurks in that sound, more prominent than other overtones, reinforcing the structure of the diatonic scale, in which the progression from that fifth back to its root tone is the resolution that brings most pieces of music to a satisfying end. Yet if you tune a piano according to those overtones alone, two Cs played together at each end of the keyboard will clash. The tuning system that’s been used for several centuries is, in that sense, artificial. 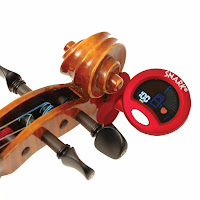 My biggest achievement as a young violin student came not through superficialities like mastering left-hand pizzicato (which I haven’t) or a clean spiccato bow stroke (ditto), but in learning to tune the instrument by ear. The violin’s four strings have intervals of a fifth between them. (It’s the same with viola, cello, and bass.) Although my rental instrument came with a pitch pipe, my teacher, Mr. Finaldi, eschewed the thing, getting his A from the carefully tuned piano in his living room and tuning the other three strings merely by listening.

These days it’s rare to see any stringed instrument without a Snark perched on its neck. Play an open string and this little gadget listens to it and offers a pitch meter that indicates how far out of tune you are and which direction is needed to adjust it, and then it glows a cheerful color to tell you you’re home. It’s so handy that there are many knockoffs available, and the inevitable phone app has followed.

I like the Snark. I use it. It gets you tuned quickly, and is especially handy in a room crowded with other tuning instrumentalists. But I still force myself at times to tune, as Mr. Finaldi showed me, by ear, sound the D and A strings together while twisting the D-string’s peg, listening to the pulsing dissonance of its out-of-tuneness as it’s coaxed into the sonority of the perfect fifth, an interval so pure that it draws you in to the essence of music itself.