DURING THE MAGICALLY CALM MINUTES between nine and ten in the morning, downtown Lenox, Massachusetts, sparkles in autumn sunlight, its New England-white buildings looking so appropriately placed that it takes some moments for me to realize that this is the picture compelled into our subconscious by the ubiquitous work of historic neighbor Norman Rockwell. What’s missing is the bumpkin perfection of the people he portrayed, but they’re crowded into Haven Bakery and Café, over on Franklin. 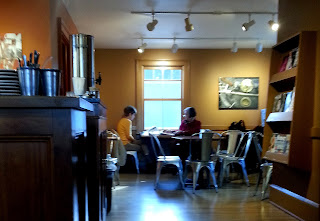 This I discover – this I should have known – after finding a parking spot directly across from the establishment, a parallel-park place into which I effortlessly placed myself despite the selfconsciousness-inflicting stare of a fellow on a park bench beside my spot. I reviewed the place favorably after a lunch visit many months ago, but this morning I’m in no mood for its goofy order-at-the-counter, find-yerself-a-seat protocol, especially given the glacial pace of prep that I’m seeing (and the complaint of my counter-neighbor, whose coffee has yet to arrive).

Lenox Coffee, located a parking-lot away from Main Street, has but a handful of customers, clustered at the tables in the rear, none of whom sports an electronic device. More specifically, they’re each scaling a Sunday Times. I delay producing my computer as long as possible, which isn’t very long.

It takes but a few minutes to gauge the sense of accommodation a given coffeeshop will offer. This one is good: the counter-people discuss movies and plays. The music has a tinge of alt-country. The wi-fi has no clever password; it has no password at all.

The latte is rich, the muffin I choose happily lacks a sugar-coated crust. By the time the yup family bursts in, I’ve relaxed into more complaisance than is good for me.

This allows an unusually high level of tolerance as the parenting nightmare reveals itself. Two whining, kyperkinetic toddler girls are in tow, each with a pair of parental units. “We’re getting you hot chocolate,” the terrors are told. I’m agape with admiration at the hell they’re prepared to withstand.

At the end of a stream of cringe-inducing caregiving attempts comes my favorite, emblematic of all of them. As the party collects its drinks and (thank goodness!) prepares to depart, one of the little girls refuses to don her coat. The outside temperature is in the fifties, but it hardly matters. As the mom intones, “You can’t go out until you put on your jacket,” I fight the urge to ask her why.

I learned early on, during my own slog through that trench, to consider the stakes of each battle and fight as few as possible. The only stake I might have in my child’s coat-wearing (or -avoiding) antics was one of appearances: I might be judged a bad parent. The realization of which was enough to launch a counter-offensive of who-gives-a-fuck, and I decided that if the tyke was old enough to make sartorial choices, she was old enough to enjoy the consequences of those decisions.

So, “Coat?” I’d ask in a similar situation. If she refused, I carried it until the cold caught up with her. And I feel no shame at the smugness I now display, because she’s now an admirably self-actuated sixteen-year-old, confident, as I am, in her decision-making.

The tyke angrily struggled into her jacket. The yups took off. A fifty-year-old Volvo eased into the lot, discharging a seventy-year-old, coffee-seeking driver. I settled back to my writing. The coffee was excellent.
Posted by B. A. Nilsson at 10:55 AM