MANY, IF NOT MOST, of the stories you read here offer encouraging observations about people and places and the things they write and do that encourage or contribute to food safety. But sharing a look at André Leu’s book The Myths of Safe Pesticides is like making you watch a horrifying movie that ends badly. As has been said in many such movies, “They’re already here,” and the monstrosity of pesticides not only is all around us, it’s also within us as well. 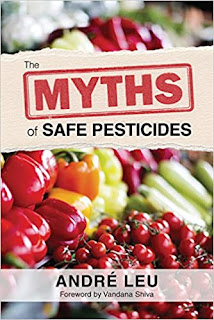 So don’t look for an uplifting conclusion. “History will look back with amazement,” writes Leu in the book’s conclusion, “that no only did our regulatory authorities know that these substances were toxic, (but also) for decades they ignored a huge body of hundreds of credible scientific studies written by several hundred scientists that documented the multiple harmful effects they cause to humans and the environment.”

That’s it in a (probably poisonous) nutshell. He further points out that it can’t be ascribed to ignorance, as was the case with some of the lethal practices of ancient societies (drinking cups of lead, immortality pills of mercury). And he generously ponders the causes, offering “incompetence, laziness, corruption, protecting reputations ... or greed on the part of a few to generate great wealth at the expense of the many.” I’m willing to go pretty exclusively with that last one. Greed has always been the major motivator of any self-styled ruling class, and it shows itself clearly in the confusion fomented around our current pandemic.

How does a pandemic make the wealthy wealthier? Partly by keeping enough of the populace in a state of fear and, by extension, helplessness to persuade them to keep wealthy oligarchs in power; more directly by taking advantage of the situation to raise prices even as their profit margins soar. It works best when the populace feels unable to fight back; it works even better when they’re persuaded there’s no need to fight back. And that’s how the pesticide industry continues to make huge profits while slowly killing us.

This is not a hopeful book. It’s a scientific one, dispassionately laying out the errors in methodology that have accumulated, to the pesticide manufacturers’ and users’ advantages, over the decades. Leu isolates and discusses five major misconceptions: the “rigorously tested” myth. The “very small amount” myth, the “breakdown” myth, the “reliable regulatory authority” myth, and the “pesticides are essential to farming” myth. The categories alone should make you nervous, but it gets more frightening from there.

“According to the United States President’s Cancer Panel (USPCP) ... ‘Only a few hundred of the more than 80,000 chemicals in use in the United States have been tested for safety.’” That’s from the 2010 edition of an annual report. Pesticides generally receive more testing than other chemicals, but they are tested individually, and not in the combinations that are used in the fields. The problem is exacerbated by perceptual issues: Ingredients are listed as “active” or “inert,” typically leaving the so-called inert ingredients untested. But such an ingredient is anything but passive, and can pack a toxicity punch all its own.

Special attention is paid in this chapter to the risks posed by GMO plants, which crank out pesticides all their own, and to the dangers posed to the developing fetus and to newborns, who have not only a higher degree of susceptibility but also can suffer genetic changes that will redound through generations.

This chapter segues into the next, the “very small amount myth,” by tracking residual amounts of pesticide chemicals and their effects on humans. Because of the hormone-like behavior of some of those chemicals, there’s the problem of endocrine disruption. The endocrine system is discussed at length in this chapter, illustrating just how vulnerable human development is to chemical disruptions. It’s commonly thought that toxicity decreases in proportion to dosage amounts, but it turns out that there’s a phenomenon called non-monotonic dose response, in which “response begins to decrease as dosage decreases, but then begins to increase as dosage continues to decrease.” This turns typical testing methodology on its ear, and no non-monotonic response testing is yet a part of pesticide chemical studies.

When I used to lease my land to farmers engaged in conventional practices, I asked for a list of pesticides they planned to apply. From the response, you might have thought I was accusing them of doing something wrong, and who was I, a civilian, to know better? “Anything we put on the fields breaks down and goes away,” I was told. And so it is that myth number three has perpetuated. “Most agricultural poisons leave residues of breakdown products or daughter chemicals when they degrade,” writes Leu. These remnants are called metabolites, and “Where there is research, it shows that many of the metabolites from agricultural poisons cause health and reproductive problems.”

As an example, dimethoate is an organophosphate insecticide used against such pests as fruit flies. It is absorbed into all plant tissues, including edible portions. Washing won’t remove it, and it will kill fruit fly maggots two weeks after application. It breaks down into another pesticide called omethoate, becoming 300 times more toxic. It’s been banned in several countries – Australia among them – but we’re still consuming it in the United States.

And who is in charge of pesticide testing and regulations? “Most of the approximately 206 nations in the world ... do not have adequate regulatory systems that monitor whether agricultural poisons are used as directed by the label,” writes Leu. And in many countries in the developing world, illiterate farmers are forced to rely on the likes of local sales agents for guidance. But the potential for danger there pales in comparison to the free-for-all that characterizes regulation in the U.S. “The EPA ... is ignoring a wealth of peer-reviewed scientific studies and is largely basing its conclusions on unpublished studies that have been commissioned by the pesticide industry.” Never mind that the EPA itself is often populated by former chemical-company executives.

The European Union, on the other hand, is at least heading in the right direction with the start of a major review of widely-used chemicals under the rubric Registration, Evaluation, and Authorization of Chemicals (REACH). Although missing key tests, “such as those for mixtures and cocktails of chemicals,” and exempting products “produced in the EU or imported in quantities of less than one metric ton,” it’s a start,

Of course, the biggest story may be the continued approval of glyphosate (Roundup), despite dramatic evidence of the harm it has caused humans. Since this book was published, an $11 billion court settlement was ordered to be paid by its creator, Monsanto, now owned by Bayer, although a web search on the issue beings up a number of Bayer-funded disinformation sites as the first hits. So they’re still at it.

Finally, and most importantly, comes myth number five: “pesticides are essential to farming.” This is true only insofar as tilling is essential, and massive single-crop cultivation is essential. Readers of this site know that’s not true, but the process of farmer education has been gradual and slow.

As Leu points out, credible studies of organic farm yields puts it at 80 percent of the yield of conventional farming, and it probably would be higher if more official attention were given to it. He notes that, “$52 billion is spent annually on agricultural research worldwide. Less than 0.4 percent (four dollars in every thousand) is spent on solutions specific for organic farming systems.”

That’s the most hopeful section of the book, if only because it points a proven way to a system wherein the Silent Spring successors of toxic chemicals can be avoided. No statement in this matter-of-fact book is without its credible, peer-reviewed backing, and each chapter teems with footnotes. It’s an admirable study, if a chilling one. We need to make changes, but we’re doing it for future generations. As far as we’re concerned, the damage is done, and this sobering study may take some of the deliciousness off your plate.

The Myths of Safe Pesticides
by André Leu
Acres U.S.A.