From the Theater Vault Dept.: Thirty-five years after the piece below appeared, Bread and Puppet Theater is still active, still based in Glover, Vermont. The Annual Domestic Resurrection Circus is no more, but you’ll find plenty of info about current activities on the group’s website. I’m aggrieved to note, however, that of the four contact venues listed at the end of the piece, only the first-named remains.

YOU HAVEN’T HEARD OF PETER SCHUMANN? You’re not alone. He doesn’t have much truck with the news media, and has rusticated himself in a tiny Vermont town away from the attention of the various cities. 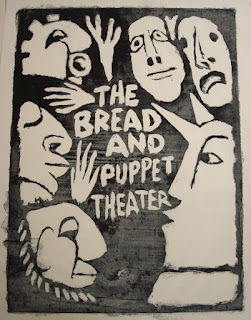 But his Bread and Puppet Theater, when it’s at home in August, fills the town with spectators every August for the Nineteenth Annual Domestic Resurrection Circus (like Jack Benny’s age, the anniversary number never changes), weekend circus of celebration. Otherwise, Schumann is touring throughout this country and Europe, an itinerary that brings him to Page Hall at the downtown SIJNYA campus Tuesday, Sept. 9 at 8 PM for a special benefit performance.

“The Hunger of the Hungry and the Hunger of the Overfed” is being presented in support of the Interfaith Partnership for the Homeless, a group that provides shelter and services for the homeless in Albany.

They couldn’t have found a better enthusiast than Schumann, who has been using his theatrical sensibility to kick up political fusses for many years. He was one of Manhattan’s first guerilla theater performers, working solo on the streets of the Lower East Side in the early 1960s, even as he was trying to place his avant-garde sculpture into museums. Many of his street shows were done with “crankies,” a mural wrapped like a toilet roll and unwound to a narration. He took on subjects like rent strikes and rat control.

At his Delancy Street studio, Schumann created puppets to express his feelings about politics and poetry, becoming particularly active when protesting the Vietnam War. His 1965 show “Fire” depicted the deliberate burning of a Vietnamese village, using life masks he took from a Chinese apprentice.

The activism continues. Just a couple of years ago, Schumann was on 12-toot stilts in an Uncle Sam costume marching up Fifth Avenue to demonstrate in favor of a nuclear freeze.

“Hunger more than any other term defines success and failure of political and economic systems,” writes Schumann. “Obviously the hunger of the hungry world is closely connected to the privileges of the overfed world, which in turn results in the transcendence of hunger into a pain of the guilty mind, unable to live up to its responsibilities.”

The set is a black and white box stage, animated by cardboard jumping jacks. (This is from Schumann’s program notes.) Featuring: a Horse Director, Three Women Not Alone, A Soldier in the Kitchen Shooting Nothing, and A Battle of Words – the big words which the media use to tell their consumer-attractive version of the reality of hunger, versus the little words, the not-so-hard-to-find facts and truths of the hunger phenomenon.

Incorporated is research on hunger from Frances Moore Lappe, puppets and an original musical composition for solo voices, chorus, junk, and classical instruments.

“Puppetry is not Punch and Judy or the Muppets,” Schumann says. “The art of puppetry is an as-yet-uninvented art form, more related to sculpture than to theater. To motivate sculpture with the public address system of theater, to speak sense through the use of color, to use the power of silence in lieu of psychological gossip – is puppetry.”

Over 700 individual homeless persons have been served by the Interfaith Partnership since its founding in 1984. More than 100 religious congregations have participated by volunteering money, food, and time, and a network of over 1,000 helpers has been established.

Executive director Daniel M. Ritchie was approached by the Bread and Puppet Theater about the benefit and liked the idea. “They have a person in the group who is from this area,” Ritchie says. “When they offered us the benefit, several of our board members who are familiar with their work were very excited about it.”

He pointed out that it was Schumann’s people who provided the larger-than-life puppets in the movie “Hair.” “They’ve been in this area before, and I understand that they like to include a street theater performance as part of their stay in any city. So I’m waiting to hear what they might be doing in Albany.”

Tickets for “The Hunger” are $5 in advance, $6 at the door; they are available at Interfaith Partnership for the Homeless, 423 Clinton Ave., the Social Action Center, 221 Central Avenue; Boulevard Books at 12 Northern Blvd.; and the Half Moon Café at 154 Madison Avenue.