YOU CAN ARGUE that Stravinsky or Schoenberg was the most influential classical-music figure of the 20th century, but they vie for the limelight only because they’re men. It was a woman who cast the longest shadow, and the Bard Summerscape celebration of Nadia Boulanger paid a long-overdue tribute even as it only scratched the surface of her profound effect on the music world. 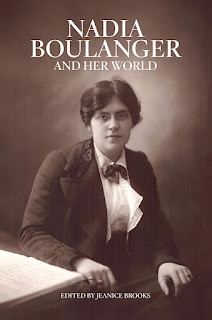 Nadia and her sister, Lili, were musical prodigies, born to a composer who won the Prix de Rome in 1836 and fathered the girls when he was in his seventies. Feeling a burden of family responsibility, Nadia entered the Paris Conservatoire when she was ten and won many prizes there by the time she was 17 – although the Prix de Rome eluded her. She soon decided to forego composition and devote herself to performing and teaching.

The younger Lili went on to win that prize at the age of 19 – the first female to do so – but intestinal tuberculosis would end her life when she was 24. Nadia then became the caretaker of her sister’s legacy even as she became the incredibly important musical pedagogue that we remember today.

The Bard Music Festival planned a Boulanger celebration for 2020, but it suffered the fate of all such events that year. The 2021 version recaptured the glory of the past such festivals, but with a slightly muted feel as we remained masked and, when possible, distanced, vaccination certificates in hand. But, as director Leon Botstein would note in a passionate speech he made towards the end of the Festival, gathering in person to share the experience of live music is a vital act of community, bridging those gaps imposed by politics and media.

One missing feature of festivals past was the pre-concert lecture. Not that they’re gone; they’ve been moved to online videos, which remain enlightening but lack the immediacy of live interaction.

In her introduction to the accompanying essay collection Nadia Boulanger and Her World, Jeanice Brooks writes, “Boulanger’s world was made up of many different and overlapping ‘worlds’ that embrace both physical places and conceptual domains, ranging from national and global geopolitics to philosophy, aesthetics, and areas of musical activity such as composition, performance, analysis, and pedagogy.”

In other words, we’re dealing with a powerhouse, which was very evident in the program presented at 1 PM Sunday, August 15 (the final day of the two-weekends-long event). “Boulanger’s Legacy: Modernities” was the theme, and an image of Boulanger projected on an upstage screen in the LUMA Theater gave the impression that she was offering her approbation.

This recital was described in the program notes as “an imaginary studio recital on rue Ballu, with composers who studied with Nadia Boulanger between the 1920s and 1970s presenting their work.” Except for Pierre Boulez, who insisted that “no one had any use for her,” but, as it turns out, in whose music Boulanger took an interest. So the program opened with Boulez’s “Notations” from 1945, a dozen miniatures that explored a wealth of sounds and styles in pianist Blair McMillen’s able hands.

Given the range of time periods and nations represented, there was an admirable breadth of style across the whole program, more so than is often found in one of these festivals. We heard songs near the beginning and end of the program, from compositional voices as varied as Karel Husa, Thea Musgrave, Michel Legrand, Marc Blitzstein, and David Conte. The Husa and Musgrave offerings were art-song sets, enough to demonstrate each composer’s variety and to showcase mezzo-soprano Hailey McAvoy (Husa) and soprano Chelsea Fingal DeSouza (Musgrave), both deftly accompanied by pianist Kayo Iwama.

Quite a contrast between Blitzstein’s “Stay in My Arms,” with its awkward lyrics (reminiscent of bad Noël Coward) and Conte’s superb (and much more recent) “Everyone Sang.” Both were nicely sung by baritone Tyler Duncan with pianist Iwama, but the showstopper was DeSouza’s delivery of Legrand’s “Paris Violon.” The song is a trifle, but the performance was unexpectedly compelling.

Other piano solos on the program were an Adagio by Roger Sessions, a chaconne-like piece that offered a feel of blues without a blues harmony, and George Walker’s Piano Sonata No. 2, a four-movement work that explored classical form with a neo-classical sound; both works were skillfully performed by Adam Golka. For a concert finish, McMillen returned to play Roy Harris’s lively Toccata, from 1949, a piece that took us from finger-busting passagework through a melodious slow section and into a fugue, with hints of Rachmaninoff throughout.

Flutist Alex Sopp was featured in the obligatory Piazzolla piece, his Tango Etude No. 3, giving the instrument plenty to do, especially in its fast finish, and then Sopp joined cellist Kee-Hyun Kim in Elliott Carter’s Enchanted Preludes, which explored the capabilities of the instruments in what seemed to be an unsuccessful search for consonance.

There was a taste of late Strauss in the textures of Adolphus Hailstork’s Adagio, played by the Parker Quartet, who also performed the big piece of the afternoon, Philip Glass’s String Quartet No. 3, from 1985, based on music he wrote for Paul Schrader’s film “Mishima: A Life in Four Chapters.” It was standard Glass, with arpeggios and ostinatos galore, but the six movements offered plenty of room for contrast and a persuasive cumulative effect of the emotional vicissitudes that lurk beneath Glass’s seeming repetitions

Sunday’s first program was a 10AM session at the large Sosnoff Theater, so chosen because of the need for an organ. “The Catholic Tradition in France: Clarity and Mysticism” reflected Boulanger’s unswerving devotion to her religion. Not all of the composers represented studied with Boulanger, but all shared her faith and musical restlessness.

Like Boulanger, Jeanne Demessieux was an organist and composer. During the 1960s, she was titular organist at La Madeleine in Paris, playing the great Cavaillé-Coll instrument there that Fauré and Saint-Saëns had also commanded that post – but she was the first woman to do so. Her Te Deum for organ, Op. 11, from 1958, proved commanding and insistent, with a horror-movie-soundtrack edge at first. Its second section more hymn-like, and it finished with a propulsive rhythmic figure with stabs of melody on top.

Other organ works were a Bach-like Fugue by Jacques Ibert, Jehan Alain’s bright, busy Litanies, and Louis Vierne’s Méditation, from Trois improvisations – an actual improvisation that Vierne never wrote down but which, a quarter-century later, Duruflé did. Like much of Vierne’s written-down music, it put the organist’s virtuosity to the test, and Renée Anne Louprette acquitted herself nicely.

And there was music by Nadia Boulanger herself, the Prélude and Improvisation from her 1911 Trois improvisations pour orgue, beginning with a slow melody taken (with decorative fill) through a series of colorful voices, finishing with a bright and effective pairing of left-hand melody with rhythmic accents in the right.

The choral works included Cécile Chaminade’s Kyrie, from her Messe pour deux voix égales, written for women’s voices and so sweet and tranquil that the audience didn’t think to applaud. Jean Langlais’s Gloria, from Messe solennelle was full of melisma, as a solo male voice wove into the full chorus, while André Caplet’s Sanctus, from Messe a trois voix, explored the sound of women alone. It was full chorus again for Saint-Saëns’s Ave Verum, a simple setting with block harmony gives way to staggered phrases, and a nice contrast to what had gone before.

More recent choral works by R. Nathaniel Dett, Francis Poulenc, and Maurice Duruflé followed, reminding us again of the incredible range of those Boulanger student voices, with the most dramatic contrast of all from Olivier Messiaen, whose O sacrum convivium!, his only motet for unaccompanied chorus, features the expected thick harmony, easing from a pianissimo start into a wildy loud finish. Much praise must be lavished upon the Bard Festival Chorale and its director, James Bagwell.

Another Messiaen piece – “Dieu parmi nous,” from La nativité du Seigneur – closed the program, taking us back to the organ for a work that started big before calming to showcase slower, more plangent thoughts. The composer’s obsession with birds was evident, but there was also a mechanical aspect reminiscent of Raymond Scott as we moved to big, loud, entirely satisfying finish.

Each Festival day typically concludes with an orchestra concert. This day the American Symphony Orchestra, conducted by Botstein, recreated a program Boulanger conducted at Carnegie Hall in 1962, shuffling the order somewhat and making a couple of substitutions.

Virgil Thomson orchestrated his 1949 band piece “A Solemn Music” for that event; typically of Thomson, he succumbed to the temptation to grow pretentious, giving us all the solemnity of a Morton Gould piece. It opens brightly, but the bathos deepens as the music becomes a dirge – the kind of thing Shostakovich wrote far more effectively.

Three songs with orchestra by Lili Boulanger followed, with two of the Psalm settings from the 1962 program swapped out for other, similar pieces. Pour les funérailles d’un soldat, to a text by Alfred de Musset, was an effective example of what Thomson was trying to do as baritone Joshua Hopkins sang to drumbeat and horns until the chorus entered to sing “Let us hear him chant the prayer for the dead” with an appropriate visit from the Dies Irae melody. Psalm 24, “La terre appartient à l’Eternel,” featured tenor Ben Bliss over organ and brass, but not before the men of the chorus asked, “Who shall ascend the hill of the Lord?” Nice use of a cappella chorus before its brassy finish. And Vieille prière bouddhique, the third song, set a Buddhist prayer, reflecting Lili’s interest in non-Western religions. Here the use of modal harmony reinforced the exotic, mystical nature of the piece, again featuring Bliss, chorus, organ, and orchestra.

Acknowledging that, because of the pandemic’s isolating effect, “We have become ripe for manipulation,” music director Botstein noted a “need to accelerated the return to public life so that we can learn to live together when we are not a homogeneous nation.” We learn it in the public spaces, he said, “is an act of assertion of a free and civilized society.”

Then he conducted Gabriel Fauré’s Messe de Requiem, Op. 48, a piece beloved by Boulanger. In many respects the most old-fashioned seeming work of all the day’s offerings, it nevertheless asserted its easygoing power and comfort. Baritone Hopkins and soprano Andrea Carroll were the featured soloist, and Carroll was especially magnificent in the Pie Jesu, finishing it with some of the most affecting timbre I’ve ever heard from a human voice. Bagwell’s Bard Festival Chorale again performed excellently here, with typically superior work from the American Symphony Orchestra. Botstein dedicated the performance to Covid victims; given the ongoing intransigence of a well-manipulated part of the populace, I fear that dedication will be relevant for a long time to come.