I HOPE THAT COMPOSER JOSEPH FENNIMORE has still more recordings that have been made of his works over the years. Every so often, but not often enough, a CD is released that offers another handful of those gems. The latest, “Blow,” is a collection of works for winds and piano. As Fennimore writes in the accompanying notes, “Winds marry better with piano than strings ... Strings have their undeniable place in the instrumental Pantheon given the repertory they command but it takes at least three of them in unison to mitigate one player’s monotonous vibrato.” Take umbrage as you will, cat-gut scrapers, but Fennimore’s music makes convincing arguments in favor of reeds, horn, and flute. 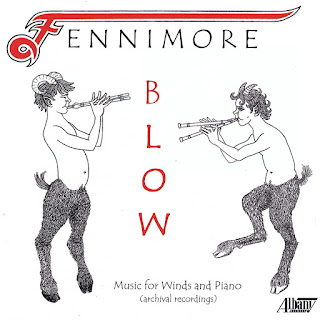 His Clarinet Sonata dates from 1968 and was recorded eight years later. It’s a twelve-minute piece that kicks off with Poulenc-like merriment; the movement that follows, marked Moderate, is a captivating byplay between clarinet and piano as they trade wistful phrases, seeming to dance away from the resolution that, of course, overtakes their tired selves at the end. They recover for a fast finish – it is, in fact, marked Fast – characterized by the deliberate uncertainty of trills and truncated phrases. But it is, again, a dance that gives way to a dreamlike middle before whirling us to a delightfully syncopated finish with a wistful tag. Clarinetist David Niethamer and pianist Charles Schneider were the worthy interpreters here.

Given the grab-bag nature of this collection, it’s no surprise to find a variety of performers represented. What’s surprising, however, is the protean nature of Fennimore’s voice. The Sextet for Woodwind Quintet and Piano premiered at Carnegie Recital Hall in 1985, the year it was written; what’s on this disc was recorded two years later at Loudonville’s Siena College. Fennimore’s voice changed during the 17 years that separate this from the Clarinet Sonata – or he at least consulted a contrasting muse. It features the composer at the piano with the Chelsea Chamber Ensemble, a group that spent its heyday honoring living composers. Although it remains staunchly melodic, those melodies are sent on more searching missions. Thus the first movement (of two) wends through passages of attractive uncertainty until it finds peace as determined cries from the winds give way to pastoral riffs over jewel-like piano figurations. The second movement, With vigor and sweep, takes us through more whimsical paces as Fennimore explores the nature of the component instruments in ear-catching combinations that often burst out from moments of unison playing.

The opening movement of Fennimore’s Second Sextet for Woodwind Quintet and Piano is marked “With good humor.” It’s hardly necessary. From the repeated three notes that rat-a-tat through the opening to the taunting children’s cry that burbles in the horn, this is a breezy, high-spirited start. Why revisit this combination? I believe that the First Sextet offered so many ear-catching colors that a second essay was irresistible. And satisfying. And a little more mysterious than the first, especially in that second movement. The horn starts it alone, soon echoed by the oboe and then clarinet as the piano asserts a few chords. As others join in, there’s a hint of Barber, a hint of Copland, but by now (it’s the last piece on the CD) you know it’s Fennimore, especially as the set of up-tempo variations that ends the work allows all of the voices to offer contrasting ideas on the breathless figure that begins the movement. Especially compelling is a variation that starts with oboe and bassoon, then welcomes the rest of the winds for some easygoing consideration before the piano sneaks back in. Again, it’s Fennimore performing with the Chelsea Chamber Ensemble.

It’s the third movement, the final one, of the Spring Sonata for Flute and Piano that’s going to surprise your ears. The opening two movements of this 1977 piece are, again, Poulenc-reminiscent, although with a degree of melancholy unique to Fennimore. The middle movement, marked Puckish, hardly prepares you for the third, as the composer’s sardonic humor shifts to Russian-inspired gloom – literally Russian-inspired, as Fennimore credits Turgenev’s novel Torrents of Spring as an emotional source. But it’s a complicated gloom, giving way to occasional grins. It could be a Bergman-movie soundtrack. The always-admirable Gary Schocker (no mean composer himself) is the flutist, with an excellent partner in pianist Dennis Helmrich.

The youngest work in the lineup is the 2002 Duo for Oboe and Piano, a work of four brief, colorful movements. It really isn’t possible to devise an equal partnership for instruments as diverse as these, but Fennimore finds a unity through contrast, with the piano tossing the briefest of notes at an instrument that specializes in just the opposite but nevertheless gets many feisty moments. And isn’t that Shostakovich peeking through the third movement? It’s a jaunty three-quarter-time moments of sardonic merriment before oboist Eugene Box and pianist Fennimore close with yet another burst of high-spirited pleasure.

Standing apart from the rest of the program, appearing a bit more than halfway through the disc, is the Romance for Flute, Clarinet, and Piano from 1987. If I suggest there’s some Debussy in its wistful nature, that’s just to compliment the composer for assimilating moods and timbres from the best. He’s joined by flutist Tim Malosh and clarinetist Larry Guy in a nice-sounding recording of a memorable piece.

Clearly, it wasn’t a bad idea to have that cassette recorder running while presenting these works, and the Albany Records label has been commendably conscientious about issuing Fennimore’s music. This is a wonderful addition to that catalogue.

Joseph Fennimore
Blow: Music for Winds and Piano
Albany Records
Posted by B. A. Nilsson at 9:58 PM